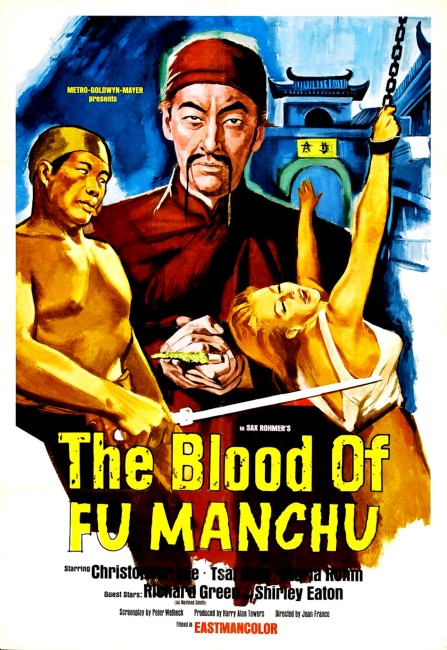 aka Against All Odds; Kiss and Kill

Fu Manchu has set up operations in the South American republic of Santo Christobel. There he infects ten women with a snakebite that will make their kiss fatal to anyone whose lips meet theirs. Fu Manchu then immediately sends one of the women out after his old nemesis Nayland Smith. After being kissed by her, Nayland Smith is blinded. Dr Petrie realises that they have until the full moon before Nayland Smith dies and so they head to Santo Christobel to find an antidote. Once there, they are caught between pursuit by Fu Manchu’s Dacoits and skirmishes from native bandits.

Fu Manchu was a creation of British writer Sax Rohmer (real name Arthur Henry Ward) who published thirteen novels between 1913 and 1959 featuring the inscrutable Chinese super-villain and his nemesis Scotland Yard inspector Sir Dennis Nayland Smith. There had been several Fu Manchu films made during the 1920s and 30s, in particular the Boris Karloff starring The Mask of Fu Manchu (1932), but Fu Manchu’s best known screen incarnation came during the 1960s when the rights to the books were obtained by British exploitation producer Harry Alan Towers. Towers’ considerable canniness was in tapping into the vogue for Anglo-horror of the day, employing Christopher Lee to play the title character and producing the lavish and exciting The Face of Fu Manchu (1965), one of the best of all Fu Manchu films. Towers retained Lee and made two other Fu Manchu films with West German backing, The Brides of Fu Manchu (1966) and The Vengeance of Fu Manchu (1967).

For his last two Fu Manchu films, The Blood of Fu Manchu here and the subsequent The Castle of Fu Manchu (1969), Harry Alan Towers employed Spanish exploitation director Jess Franco. Jess (sometimes Jesus) Franco was possibly the most prolific director in the world and has made nearly 200 films between the 1960s and his death in 2013. (See bottom of the page for a full list of Jess Franco’s films). Almost all of these fall into the horror or erotic genres, with Franco having become notorious for the frequent sado-sexual element in his films. Franco and Harry Alan Towers would collaborate for a total of nine films beginning with The Blood Fu Manchu and its sequel and running through the likes of The Seven Secrets of Sumuru/The Girl from Rio (1969), Justine (1969), Venus in Furs (1969), The Bloody Judge (1970), Count Dracula (1970), Eugenie/Philosophy in the Boudoir (1970) and 99 Women (1970).

The plot of The Blood of Fu Manchu often resembles the one in The Brides of Fu Manchu, which similarly had Fu Manchu with a collection of women under his control, hypnotised and forced to act as his puppets. The plot about women with a deadly kiss or as carriers of a disease was also used in a number of spy films of the era, most notably the James Bond film On Her Majesty’s Secret Service (1969). However, the story here is all over the place. Most of the film consists of Fu Manchu prepping the girls for their mission intercut with numerous scenes of the bandits raiding. It is a plot that never seems to be in the process of going anywhere or building to anything. Disappointingly, Fu Manchu’s customary adversary of Nayland Smith is barely present as a nemesis throughout. He is put out of action early in the show and only appears in two scenes during the first hour. This is peculiarly a Fu Manchu film where Nayland Smith is almost a supporting character to Dr Petrie who gets the lion’s share of the adversarial scenes – even then, these mostly consist of Petrie being played as a comic old duffer Englishman who is absurdly insisting on his creature comforts in the middle of the jungle. More importantly, the film never generates any urgency about the impending fatality of Nayland Smith’s poisoning and the importance of finding the antidote. The film arrives at a perfunctory climax where the lost city is blown up.

One other complaint that might be made of The Blood of Fu Manchu is that Jess Franco’s sense of period is confused. The earlier films established the period they were set as around the 1920s. The Blood of Fu Manchu seems consistent with these – when Loni Von Friedl runs from Nayland Smith’s house, she is run over by a vintage car. On the other hand, in some of the stock background footage that Franco throws in elsewhere, we see modern (1960s) skyscrapers and cars, while throughout the girls are anachronistically dressed in mini-skirts and go-go boots.

Christopher Lee gives his customary cold, dignified performance. Tsai Chin, a delight in the earlier Fu Manchu entries, is not given much to do this time. There is an entertainingly boisterous performance from Ricardo Palacios as the bandit leader. Shirley Eaton, best known as the girl painted in gold in the James Bond film Goldfinger (1964), is cast in the role of The Black Widow in a single scene that looks as though it has nothing to do with the rest of the film. This is not too surprising as the scene was in fact taken from Franco and Towers’ other Sax Rohmer adaptation The Seven Secrets of Sumuru/The Girl from Rio (1969) and, according to Shirley Eaton, used without her permission. The film was shot on location in Spain and Brazil.

The other Fu Manchu films include:– a series of 23 short silent British films made between 1923 and 1924 starring H. Agar Lyons as Fu Manchu, all of which appear to be lost today; three early sound films from Paramount, The Mysterious Dr Fu Manchu (1929), The Return of Dr Fu Manchu (1930) and Daughter of the Dragon (1931), starring Warner Oland who later gained fame as Charlie Chan; a fifteen chapter serial The Drums of Fu Manchu (1940) from Republic starring Henry Brandon; the tv series The Adventures of Fu Manchu (1956), which only lasted for eleven episodes, starring Glen Gordon; and The Fiendish Plot of Dr Fu Manchu (1980), a parody that featured Peter Sellers in his last performance playing both Fu Manchu and Nayland Smith. Harry Alan Towers also produced several films based on Sax Rohmer’s Sumuru books about a female super-villain with The Million Eyes of Sumuru (1967), the Jess Franco directed The Girl from Rio (1969), both starring Shirley Eaton, and Sumuru (2003) starring Alexander Kamp.