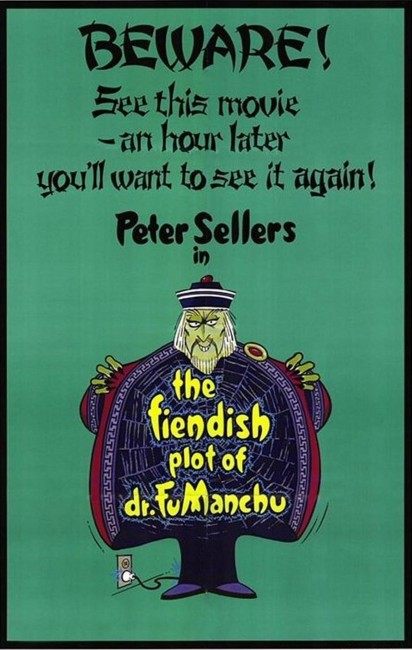 On his 168th birthday, Fu Manchu is about to take another dose of the Elixir Vitae to prolong his longevity when he spills it. In order to make another dose, he must obtain a large supply of diamonds. He decides that in order to do this he must appropriate the British Crown Jewels. He launches an elaborate scheme to kidnap the king and queen in order to obtain the Jewels. Scotland Yard respond by trying to bring Sir Dennis Nayland Smith out of retirement. However, Sir Dennis has never been the same after being tortured by the Chinese and has formed an unnartural emotional attachment to his lawnmower.

Here Peter Sellers indulges his penchant for multiple characters by playing both Fu Manchu and Sir Dennis. His Sir Dennis is an amusing send-up of Peter Cushing, while his Fu Manchu is an absolute delight, played as a wily Old Boy’s send-up of all the previous Fu Manchu’s. Fiendish Plot is a hard to dislike film – from the opening moment where a cliche Gothic organ solo turns into a rendition of Happy Birthday to the wonderful little seduction that goes on between Sellers’s Fu Manchu and Helen Mirren’s policewoman. She is the one other bright spot of the film, able to slip between an amusing parody of royalty and a West End accent at a moment’s notice. There are places where the film is undeniably silly – the end with Peter Sellers doing a bizarre Oriental Elvis impersonation, singing a number called Rock Me Fu should have gone onto the cutting room floor – but the film has its moments.

Director Piers Haggard is the grandson of adventure writer H. Rider Haggard, the author of the adventure novels King Solomon’s Mines (1885) and She (1887). Piers Haggard has made a handful of other genre works including the occult film Blood on Satan’s Claw (1971), the tv mini-series of Dennis Potter’s Pennies from Heaven (1978), Quatermass/The Quatermass Conclusion (1979), Venom (1982) and the afterlife film The Breakthrough/The Lifeforce Experiment (1994).