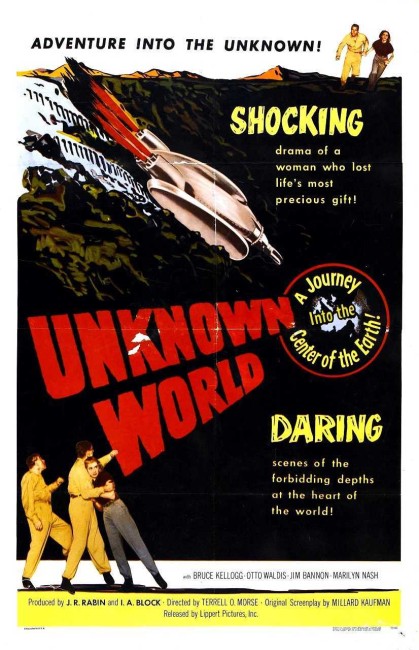 Fearful of the certain doom that humanity faces from atomic war, Dr Jeremiah Morley sets up the Society to Save Civilization. He proposes a plan to move humanity en masse down into the vast network of caverns and tunnels at the centre of the Earth to escape the coming nuclear holocaust. To this end, he brings together a team of experts. With the backing of the son of a newsreel producer who requests to come along, they construct the Cyclotram, a mole that can burrow underground. They launch The Cyclotram and set forth to explore the tunnels. However, the expedition is undermined by both growing catastrophes – poison gas, contaminated water, volcanic eruptions – and the loneliness and despair felt by the crew so far from civilisation.

For a zero budget 1950s lost world effort, Unknown World achieves some unexpectedly good things. One need only look at similarly titled Unknown Island (1948) from a couple of years earlier with its prehistoric lost world cliches, shabby models and men in dinosaur suits to make comparison.

Unknown World is a surprisingly downbeat film. An oppressive atmosphere of gloom and hopelessness looms over the mission – not to mention the 1950s spectre of nuclear annihilation lurking in the background. The underground caverns become an echoing mill for the tensions between the at-times stilted characters. The effect is striking, especially in comparison to most other B-genre films of the 1950s, which tended to be optimistic and take hope in community togetherness and/or faith as opposed to here where the tone is pessimistic and gloomy.

The location photography in the Carlsbad Caverns is somewhat murky but often proves impressive. However, when the film opens out into vistas of beautiful crystal-clear stalactites, underground waterfalls, oceans and matte-painted deserts, it achieves a peculiarly lyrical note. This is given hauntingly poetic echo by Marilyn Nash’s voice-over narrations. The film is also memorable for what might be called an inverted anti-poetry of sorts where the seemingly magical suddenly becomes mundane – where pearls are discovered but revealed to only be rocks, what seem to be flowers are proven to be calcium deposits, where an inland desert turns out to be a sterile wilderness of ash and so on.

The geology and science on view is wholly creative – like the claim that the Earth’s core is cool or one piece of dialogue where sterility is blamed as the cause of a miscarriage (in actuality, sterility would mean an inability to even conceive in the first place). What one can at least say is that the film plays its pseudo-science with an absolutely determined conviction in itself. The design of the full-size mock-up of The Cyclotram is good, although this is let down by poor models in other scenes.

Unknown World was the first film produced by Jack Rabin and Irving Block who together provided special effects for a number of 1950s films, including Rocketship X-M (1950), Invaders from Mars (1953), World Without End (1956), The Invisible Boy (1957), The Saga of the Viking Women and Their Voyage to the Waters of the Great Sea Serpent (1957) and tv’s Men Into Space (1959-60), among others. The two also produced Kronos (1957), Roger Corman’s War of the Satellites (1958), The 30-Foot Bride of Candy Rock (1959) and The Atomic Submarine (1959), while Rabin on his own produced/came up with the story for Cat Women on the Moon (1953) and Block with the original story for Forbidden Planet (1956). Terrell (or Terry) Morse was better known as an editor – his one other genre credit was as director of the English-language inserts for Godzilla, King of the Monsters (1954).