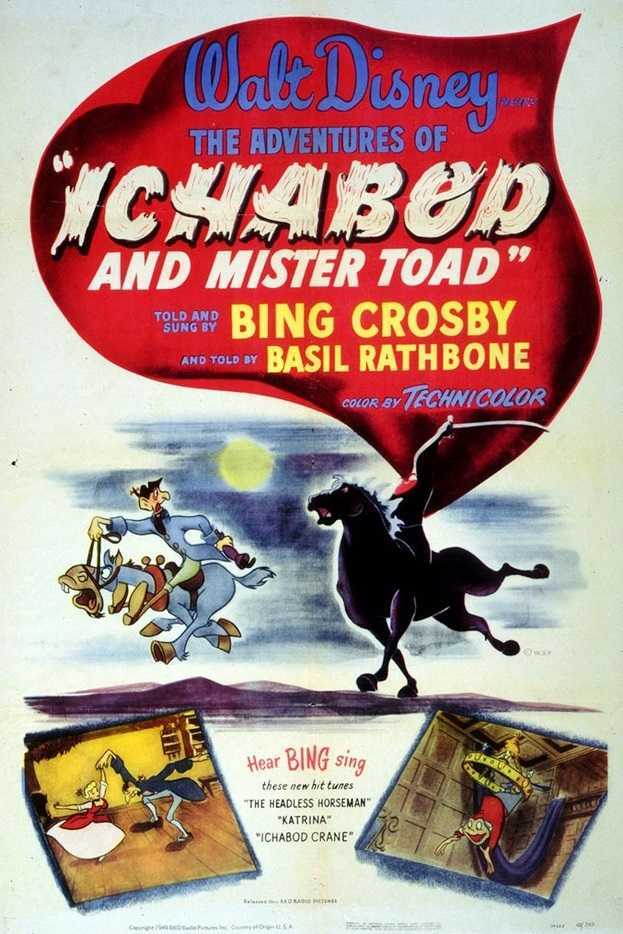 Mr Toad:– Angus MacBadger, the lawyer for the estate of J. Thaddeus Toad, calls Toad’s two best friends Mole and Rat to him. MacBadger is concerned about Toad’s penchant for madcap exploits and the costs for damages that he is running up. As they try to help Toad, he sees a passing car and develops a case of Motor Mania – an all-consuming obsession to have a motorcar. Mole and Rat try to lock Toad up for his own good but he escapes. Toad is then arrested for trying to steal a motorcar and is sent to jail, even though the evil weasels were the real guilty party. Mole and Rat hatch a scheme to rescue Toad from jail and get Toad Hall back from the weasels. Ichabod Crane:– The lanky and pompous Ichabod Crane arrives in Sleepy Hollow to take up a job as the new schoolmaster. Ichabod sees and falls for Katrina van Tassel, the beautiful daughter of a wealthy farmer. Rivalry ensues between Ichabod and the burly, bad-tempered Brahm Bones for Katrina’s hand. At a Halloween dance, Brahm tells the story of the legend of the Headless Horseman that haunts Sleepy Hollow, which terrifies the wits out of the superstitious Ichabod. On the way home, the Headless Horseman then appears and pursues Ichabod.

The Adventures of Ichabod and Mr Toad is one of the better among the handful of lacklustre animated anthologies that Disney made during the late 1940s. Disney had peaked in the earlier part of the decade with films like Snow White and the Seven Dwarfs (1937), Fantasia (1940), Pinocchio (1940), Dumbo (1941) and Bambi (1942). However, the coming of the Second World War meant the conscription of much of the studios’ creative talent and Disney were reduced to making various portmanteau anthologies comprised of shorter length films thrown together. These included the likes of Saludos Amigos (1942), Melody Time (1945), The Three Caballeros (1945), Make Mine Music (1946) and Fun & Fancy Free (1947), most of which feel like half-formed ideas.

The segment is an immensely lively piece with crazed chases across the countryside and a standout sequence where the foursome venture into Toad Hall to get the deed back – with Mole being winched down on a rope but his hat being blown away by the weasels snoring, and a madcap race to get the deed, which has been made into a paper dart, with they diving under the carpet and snatching a pair of bellows to try and stop it from falling into the fireplace. The character of Toad is a joyous lunatic – indeed, Toad is one of the most deliriously manic characters that Disney had ever put to screen.

On the other hand, while Mr Toad is a delight, the Ichabod Crane segment comes out a more mixed piece. The comic scenes between Ichabod and Brahm Bones tend to too much of a mawkish cuteness. The build-up to the appearance of the Headless Horseman is good, with Ichabod being scared out of his wits by everything – the rustling of the wind, tapping flora sounding like drumming hoofbeats, frogs appearing to croak his name, glow-worms in a tree hollow looking like the face of a ghost. The actual appearance of the Horseman as a demonic vision all in flaming red is genuinely fantastic, although the fieriness of this sequence is undercut by the intrusion of the slapstick comedy elsewhere.

The thrust of Ichabod Crane also comes across as mixed. The way the story is written, Ichabod Crane is meant to come across as a pompous windbag who gets what he deserves, while Brahm Bones is meant to be seen as a decent down-to-earth guy who eventually wins through and gets the girl. However, the way it is played on screen, Ichabod comes across as a bumbling, likeably clever nebbish while Brahm is seen as bad-tempered and bullying. This makes the eventual comeuppance of the story mixed, as it seems that the wrong characters end up getting their just desserts. Certainly, Ichabod Crane is a much more faithful adaptation of The Legend of Sleepy Hollow than the Tim Burton film Sleepy Hollow (1999) was.

Both Mr Toad and Ichabod Crane were released separately as short films by Disney – The Legend of Sleepy Hollow (1958) and The Wind in the Willows/The Madcap Adventures of Mr Toad (1975).