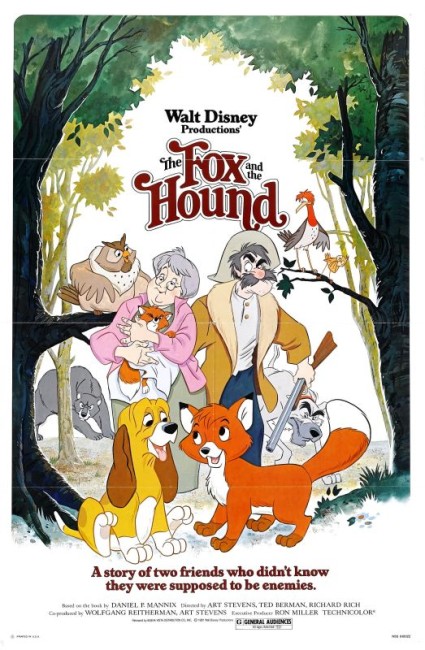 A young fox is abandoned near a farmhouse after hunters shoot its mother. Two birds come to the young fox’s aid and contrive for it to be found by Widow Tweed. She adopts the fox, naming it Tod. As Tod grows up, he befriends Copper, a young pup owned by the neighbouring farmer Amos Slade. However, Slade is intending to raise Copper as a hunting dog and the other farm animals warn Tod that he and Copper are doomed to be mortal enemies. Slade takes Copper away over one winter and Copper returns grown up and in full command of his skills as a hunting dog. When Tod innocently goes to visit Copper again, Slade sets Copper to hunt him but Copper wavers in his decision to kill Tod because of their friendship. However, when Tod causes Slade’s other dog, the aging Chief, to fall from a railway bridge and nearly be killed, Copper swears vengeance against Tod. For his own protection, Widow Tweed takes Tod away to a game preserve. Tod finds happiness there with a female fox Vixey. However, Slade breaks into the preserve with Copper, determined to hunt Tod down.

The late 1960s and the whole of the 1970s and 80s was a desert at Disney studios as far as their classical animation tradition went. During this time, Disney’s output of films was surpassed by their output of live-action films or re-releases of their earlier animated classics. When the studio did venture into original animated films, what emerged was lesser fare such as The Jungle Book (1967), The Aristo Cats (1970), Robin Hood (1973), The Rescuers (1977), The Fox and the Hound, The Black Cauldron (1985) and Oliver and Company (1988), with only occasional highlights such as The Great Mouse Detective (1986). It was not until the successes of The Little Mermaid (1989) and Beauty and the Beast (1991) that Disney began to regain some of the glory that the studio had had during its heyday when Walt was alive.

The Fox and the Hound begins very well. There is an excellent (and particularly well scored) opening – one that recalls Bambi (1942) – with a fox being hunted and then in a sudden reversal shown not to be carrying prey but running with its own child, before it is joltingly shot. The rest of the film continues well, with the scenes with the anthropomorphic animals being conducted with an endearing cuteness. What is particularly good during these early scenes is how the film contrasts a sense of innocence with a knowing sadness, the sense that the happy play between the young friends is tempered by the knowledge that they will grow into adult nemeses. During these sequences, The Fox and the Hound holds some of the quality that sits up there along with Disney classics like Bambi.

Unfortunately, the film never sustains it. The Fox and the Hound was made in the period when Disney were self-consciously crafting what they did within the framework of being family entertainment, where everything came with the expectation that it must be not too threatening for children. The scene where Chief is killed and in seeing Copper’s friendship turning to hate is good but the emotional impact of the scene is wrecked almost immediately after by the revelation that Chief wasn’t killed, merely injured in the fall. It is this crippling belief that Disney fell into that no child should ever be put through the trauma of seeing a likeable character killed off.

Moreover, The Fox and the Hound was also made at a point when Disney’s animation was dominated by a strong slapstick element – many of the cutsie scenes with Tod and Copper frolicking topple over into a silliness. The latter third of the film with Tod’s romantic infatuation and the scenes with he and Vixen dancing about are far too twee and drag down the adult emotions that the earlier sections had.

Most ridiculous is the feelgood ending – one where the granny is seen bandaging the foot of the curmudgeonly farmer and we are suddenly supposed to forget that he has been trying to murder the hero; where the caterpillar that the two birds have been trying to eat throughout turns into a butterfly and they are amazed; where the two childhood friends rediscover their friendship again; where Tod settles down with his lady love and, of course, Chief is fine and still alive again. The film also features some bland songs sung by a flat-voiced tenor.

Amid the host of dvd-released sequels to their animated films that they turned out during the 1990s-00s, Disney inevitably sequelised The Fox and the Hound as The Fox & the Hound 2 (2006).