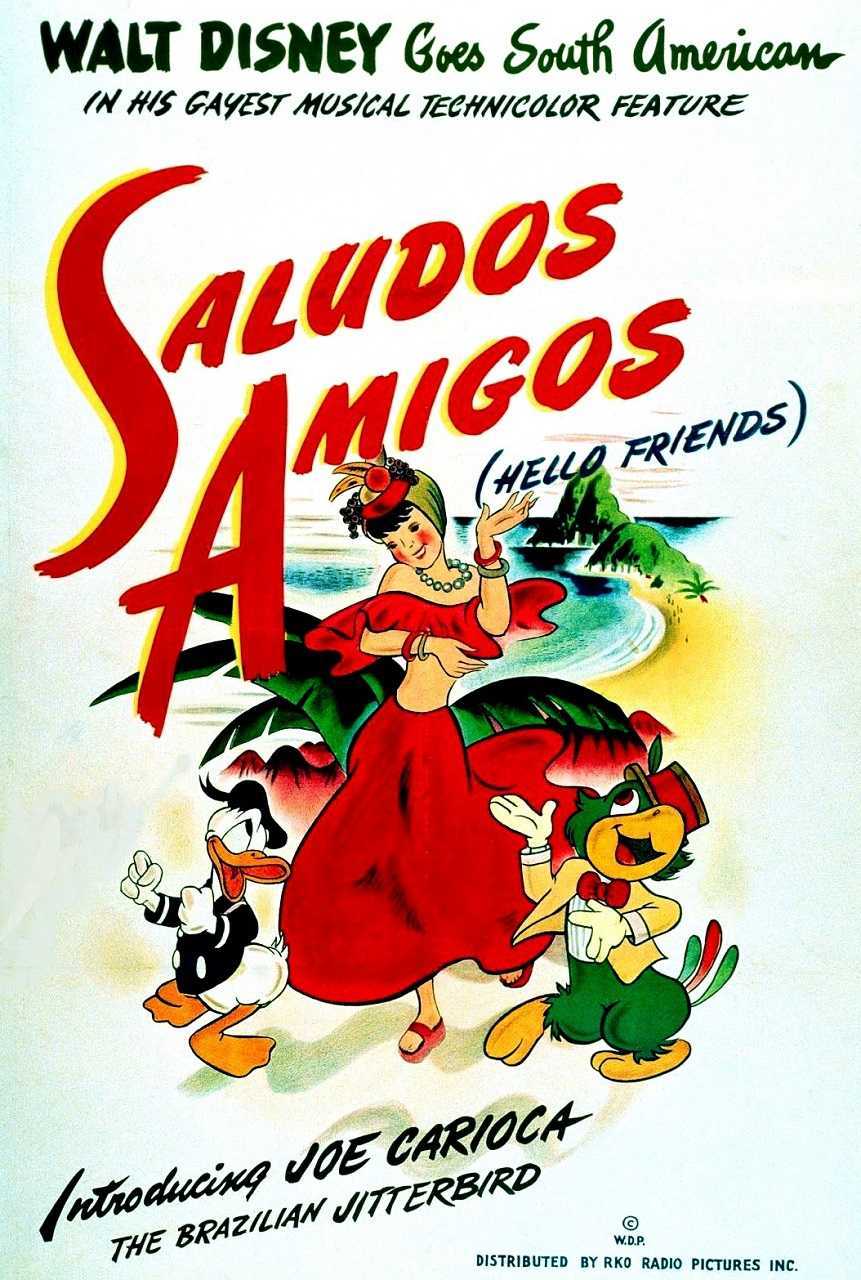 A group of Disney artists go on a tour of Latin America in search of inspiration. The results:– Donald Duck takes a comic tour of Lake Titicaca and the Chilean mountains. When his father falls ill, the young mail plane Pedro must make a perilous mail pickup and travel across the treacherous Andean range, where he runs afoul of storms created by a bad-tempered mountain. The cowboy Goofy is transported from Texas and transformed into a gaucho in the Argentinean pampas regions. The parrot Jose Carroca takes Donald Duck on a singing-dancing tour of Rio de Janeiro.

Saludos Amigos was made by Disney during World War II. This was a time when conscription had stolen the pool of available Disney artists. Disney dealt with this by downsizing from feature length animation to portmanteau-styled animation anthologies. During this period, they also made the likes of Melody Time (1945), Make Mine Music (1945), Song of the South (1946), The Three Caballeros (1946), Fun & Fancy Free (1947) and The Adventures of Ichabod and Mr. Toad (1949).

Although none of the anthologies were particularly bad, this diversion into these compilation anthologies was a considerable comedown from the heights Disney had climbed at the beginning of the 1940s with the likes of Fantasia (1940), Pinocchio (1940), Dumbo (1941) and Bambi (1942) and for several years the studio’s grace fell in the public eye. It took until the 1950s for Disney to return to feature-length animation but even then many of the features felt lesser films and there was the sense that some Golden Age of Disney animation had passed away never to be regained.

Saludos Amigos has one of the most unique concepts ever tried in animation – that of the animated travelogue. At the time the film was made, the Latin American market was one of the largest fan audiences for characters like Donald Duck and Mickey Mouse. Along with The Three Caballeros, Saludos Amigos shows Disney trying to tap directly into this market – in some segments here, even the background lettering comes in Spanish, which suggests that Disney was thinking of the Latino market ahead of the English-speaking one. (Although the truth behind this was that the Disney artists’ tour of Latin America was funded by the U.S. Office of Inter-American Affairs and the project made in a desire to recruit South America as an ally with the US against the Axis Powers in the War).

Saludos Amigos has clearly been conducted as an experimental exercise and as such it is somewhat hit and miss. As the travelogue it sets out to be, it is cursory, only visiting four Latin American locations – Lake Titicaca, The Andes, Argentina and Rio de Janeiro – and leaving the rest of the region untouched. For a feature film, it is surprisingly short – only forty minutes in length – and could easily have supported at least two or three more segments.

The first, third and fourth segments keep fairly much to the travelogue format but the second seems more of an original short. The first and third segments are the most consistent in tone, using familiar Disney characters in lively slapstick scenarios to demonstrate the features and culture of the various regions. The Portrait of Brasil segment, an impressionistic samba number, is the slightest.

However, the second segment is a pure delight where the Disney animators’ penchant for dewey-eyed anthropomorphism in the characterization of the baby plane is utterly gorgeous as we watch it struggling through storms with a mail bag tucked under its wing, coughing and spluttering as it runs out of fuel, going to school to learn ‘reading and sky-writing’ and the like. This is a segment that one wishes had been much longer.