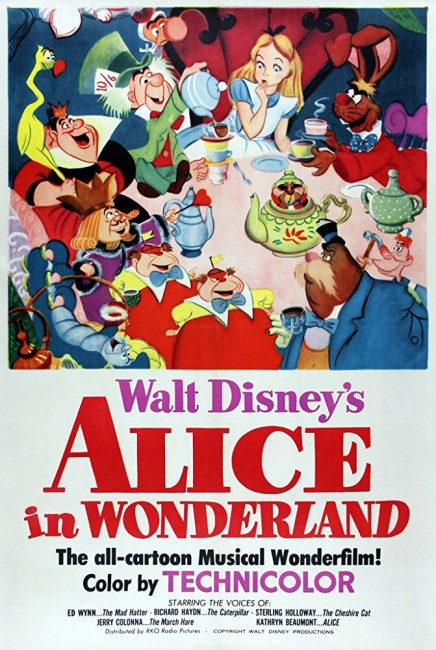 Young Alice follows a white rabbit down a hole into a bewilderingly surreal world filled with strange and eccentric creatures where she engages in adventures at both big and small size.

For all the trite, feelgood family formula that the Disney name has become synonymous with, they managed to produce something surprisingly agreeable when they took on the droll absurdism of Lewis Carroll’s perennial Alice in Wonderland. The film is a hodgepodge of scenes taken all over the place from both Alice’s Adventures in Wonderland (1865) and Through the Looking Glass (1871), as well as others that are outright inventions by the Disney animators. While Disney’s Alice in Wonderland irritated the Lewis Carroll purists, it makes for a rather enjoyable film.

For an American film, the characterisation of Alice is spot-on with Kathryn Beaumont making a wonderfully prim and curious but perfectly British Alice. The animation is conducted with an extraordinary liveliness. The deliriously caterwauling visions of some of the Disney films of this era frequently leave one amazed as to exactly what sort of substances it was that half the animation staff seemed to be hooked on. A wander through the woods involves encounters with a range of genuinely bizarre anthropomorphic creations – ducks that are hooters; vultures that are umbrellas; eyeglass and spade shaped birds; a bird that is a bird cage – it eats other birds, which then become prisoners in its cage; another that is a pair of eyeglasses; accordion owls; birds that operate as pieces of chalk for a blackboard; a dog that has a hearth-brush for a face.

However, it is the Mad Hatter’s Tea Party that achieves levels of genuinely demented surrealism – with the Mad Hatter pouring tea via his sleeve, dipping saucers in his cup and eating them, three-tiered teapots for pouring three cups at once, spoutless jugs that have to be broken to drink the tea and (literally) half-cups of tea. The sequence involving the bashing up of, then buttering, spreading jam on and pouring tea into the White Rabbit’s pocket watch before handing it back and announcing it is broken is a wonderfully malicious piece of farce.

The film does not always work – the diversion to the telling of the story of the walrus and the carpenter is too brief to have much point, as is an encounter with some talking flowers, while the choral songs are badly dated. Nevertheless, Disney’s Alice in Wonderland still holds a great deal of charm.