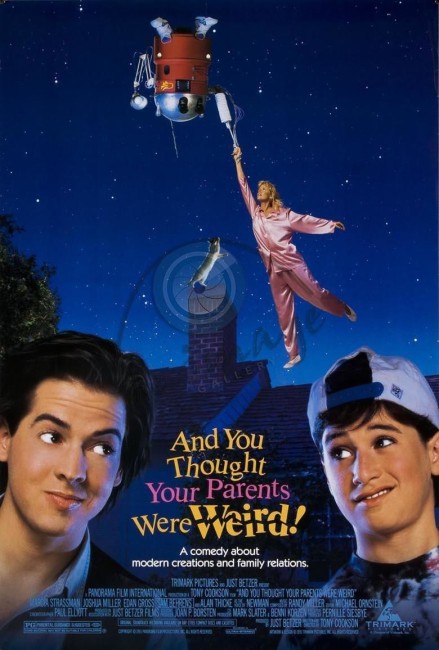 Brothers Josh and Max Carson win a junior science contest with their design for an automated garbage can. They plan to use the prize money from the contest to construct their robot Newman. Josh is attracted to the lovely Beth Allen. While fooling around with an ouija board, the two of them unwittingly cause the spirit of the boys’ late inventor father to return and inhabit Newman. As they try to perfect the design, their father sets about wooing their mother over again, while still in the robot body. They must also deal with a nosy tv reporter who is determined to find what they are up to, and two bullying rivals who want to steal the secrets of Newman to sell them.

The sad news about And You Thought Your Parents Were Weird is that its zany title is the most creative thing about it. The rest is a dreary children’s film, made on a low budget and disappointing on all levels.

The basic idea is weak and the results emerge as little more than a limp clone of Short Circuit (1986). At no point does any of the film suggest the sparkly eccentricity that the title does – it is a sad day when the most imagination in a production has all been employed by the advertising department.

The barely recognisable names – Joshua Miller, Marcia Strassman and A.J. Langer – all give competent enough performances. The villainy comes expectedly over the top – it is hard to believe a bully like Eric Walker could also be a brilliant teen inventor.

The robot, which looks like a motorised garbage can, is surely one of the dopiest ever put on film. Expectedly the film climaxes in a slapstick sequence where the villains get theirs at the pincer of the robot.