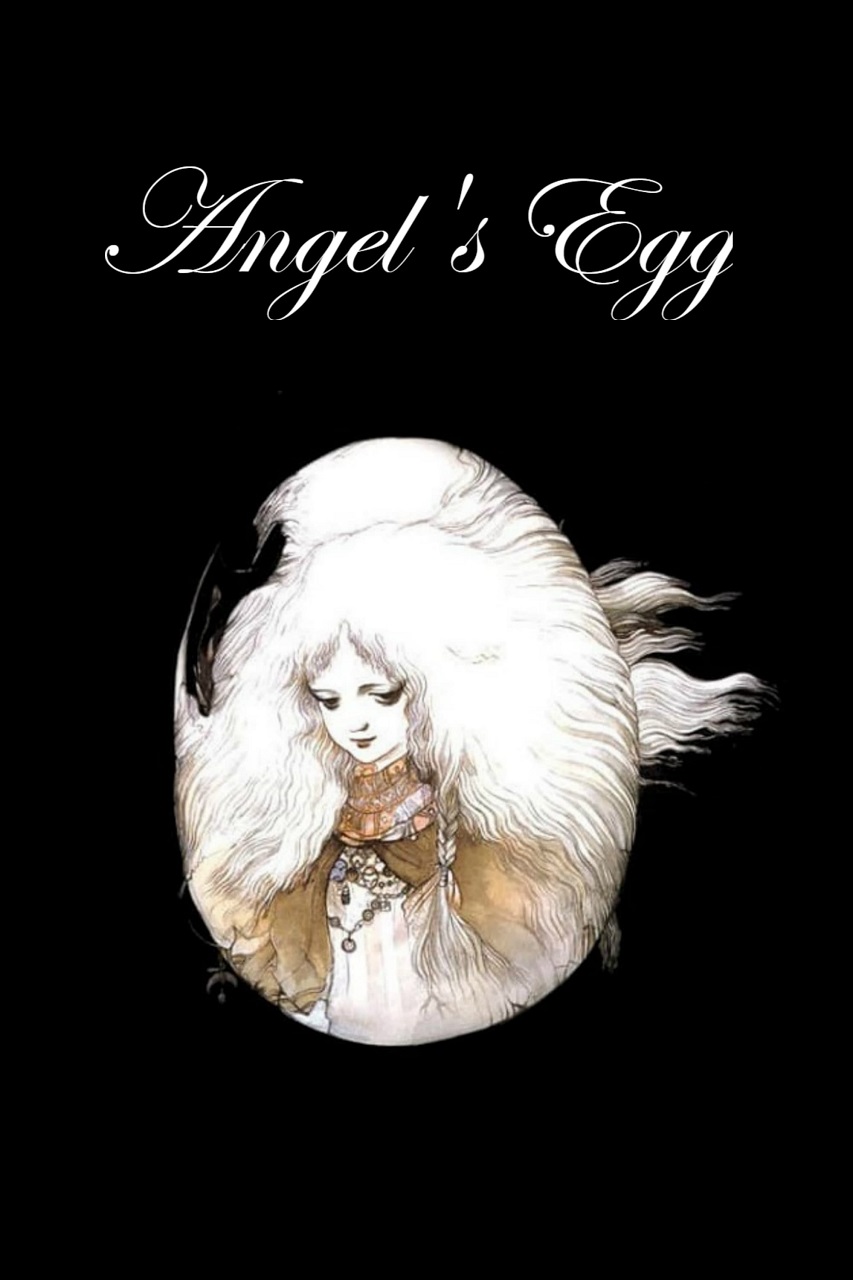 On a strange world, a young girl witnesses the arrival of a ship and watches as people emerge. She finds a large egg and takes it. She meets a man from the ship and cautiously befriends him. He is curious about what is in the egg but she says she does not know. The two of them journey through the city and across the landscape.

Angel’s Egg was the one of first films from anime director Mamoru Oshii who has since become one of the most interesting names in contemporary Japanese fantasy cinema. Initially emerging as a director on various animated tv series, Oshii appeared on cinema screens with the children’s fantasies Urusei Yatsura: Only You (1983) and Urusei Yatsura 2: Beautiful Dreamer (1983), both adapted from a tv series he had worked on, the science-fiction film Dallos (1983), and following this by the Transformer robot films Patlabor: The Mobile Police (1989) and Patlabor: The Movie 2/Patlabor: The Mobile Police 2 (1993). In between this, he moved into live-action with the SF action Red Spectacles (1987) and its follow-up Stray Dogs (1991), and the non-genre Talking Head (1992). He then wowed audiences worldwide with the Cyberpunk anime Ghost in the Shell (1995) and its sequel Ghost in the Shell 2: Innocence (2004). In between, Oshii made the live-action film Avalon (2001) and its semi-sequel Assault Girls (2009) and then returned to anime with The Sky Crawlers (2008) and an episode of Halo Legends (2010). He has also scripted Jin-Roh: The Wolf Brigade (1998) and produced Blood: The Last Vampire (2000).

Angel’s Egg was one of Mamoru Oshii’s earliest films. It is a surprisingly experimental film. It, for example, comes with almost nothing in the way of dialogue – maybe half-a-dozen lines in all. It has a commercially slight running time of only 71 minutes. Furthermore, it is a film that never gives you a handle on what it is – science-fiction or fantasy? It takes place on what looks like another planet with the arrival of what would appear to be spaceships in the opening scenes. This is followed by scenes with the people from the ships passing through the city in giant machines. However, these science-fictional aspects sit alongside much more fantasy-like elements such as angels and scenes with fishermen chasing phantom fish. It feels more like a work of student surrealism than a piece of commercial animation.

The style with its richly detailed backgrounds reminds of the works of Rene Laloux – the director of films like Fantastic Planet (1973), The Time Masters (1982) and Gandahar/Light Years (1988) – who specialised in science-fiction films filled with exotically strange backgrounds. There are times Mamoru Oshii’s visions are striking – the opening scene with the arrival of the ships that look like the Gothic buttresses of giant cathedrals descending from the sky; the beautifully surreal image of the fishermen trying to catch the shadows of flying whale creatures with nets and harpoons against the pavement and walls of building as they pass through the town.

On the minus side, the pace of the film is very slow. The lack of anything approaching a plot proves frustrating – after a long journey across the plane, the film just comes to an abrupt ending. The lack of any build-up, plot or drama leaves you feeling dissatisfied. Indeed, the film’s company more correctly belongs in that of experimental surrealist works like Eraserhead (1977), Begotten (1990) and The PianoTuner of Earthquakes (2005). Perhaps the nearest animated equivalent might be a film like Chronopolis (1982).