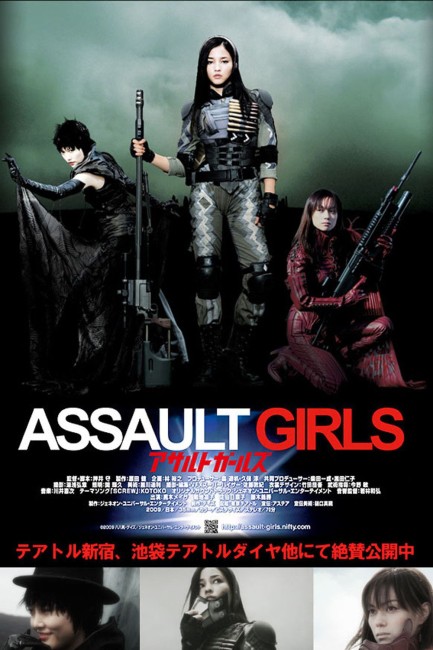 In the future, the population has dealt with economic collapse by creating a society of ordered safety. The only retreat from this has been into Virtual Reality game worlds. One of the most popular of these worlds is Avalon. In an outlaw branch called Avalon[f], three women and one male player fight the huge sand dragons they must defeat to earn points. The Game Master suggests that if they are to beat the scenario, they must team up together.

Assault Girls is a live-action film from Mamoru Oshii. Known principally as an anime director, Mamoru Oshii has become one of the most interesting names in contemporary Japanese fantasy cinema. Oshii began working as a director in various anime tv series before becoming a feature director with the children’s fantasies Urusei Yatsura: Only You (1983) and Urusei Yatsura 2: Beautiful Dreamer (1983), both adapted from a tv series he had worked on, the science-fiction film Dallos (1983), the surreal fantasy film Angel’s Egg (1985), Patlabor: The Mobile Police (1989) and sequel. In between this, he moved into live-action with the SF action Red Spectacles (1987) and its follow-up Stray Dogs (1991), and the non-genre Talking Head (1992). He then wowed audiences worldwide with the Cyberpunk anime Ghost in the Shell (1995). Subsequently, Oshii went onto make Ghost in the Shell 2: Innocence (2004), The Sky Crawlers (2008) and an episode of Halo Legends (2010). Oshii has also scripted Jin-Roh: The Wolf Brigade (1998) and produced Blood: The Last Vampire (2000).

Mamoru Oshii had previously ventured away from animation into live-action with Avalon (2001), a visually extraordinary film that seemed to be trying to find a fusion between anime and live-action. It took place inside a videogame simulation where the lead character slowly woke up to the fact that her life was part of a simulated world. Assault Girls seems to be a sequel of sorts – or at least is said to take place in the same videogame world of Avalon. Oshii had previously directed Assault Girls as an episode of the action movie anthology Kill (2008) and expanded it out as a feature film here, albeit a surprisingly brief 65 minute one. Oshii subsequently returned to live-action with the clone wars film Garm Wars: The Last Druid (2014)

Assault Girls starts well with Mamoru Oshii offering up a long preamble that sets the stage with the idea of a future society that elects to spend most of its time in Virtual Reality … only for the film to fall apart on him the moment he gets inside the virtual world. For anybody who has come expecting more of the amazing visuals of Avalon, which was set in a dusky faded world that looked like World War II era and had the unique look of live-action trying to appear as though it was anime, Assault Girls with thorough disappointment proves to be set outdoors on a bare plane and with standard visuals for the entire running time. Even the complex future scenario outlined in the opening moments proves to be of no relevance to the film whatsoever.

The bulk of Assault Girls feels like a videogame version of Sucker Punch (2011). Mamoru Oshii buys into the same male sexual fantasy that Zack Snyder did in Sucker Punch of having hot-looking girls running around in kickass action poses. Unfortunately, the idea falls down about there. For some reason, Mamoru Oshii has also chosen to shoot Assault Girls in English. The actors are all Japanese and pronounce their English through thick accents that makes the dialogue frequently incomprehensible.

The four players spend their time running around a bare plain tackling giant sand dragons with various combinations of weapons and accumulating points. The sand dragons are represented by some not particularly special visual effects. Beyond this, there is nothing else to Assault Girls. It never, for instance, does anything like gel together into a plot – it seems to have no more ambition that being the filmed equivalent of a videogame and the concept never stretches beyond serial combat encounters.

There is the odd time that Mamoru Oshii finds more than that. There is an contemplative middle section where he forgets about combat sequences for a few minutes and focuses on soothing images of clouds above the plains, the girls just sitting thinking, and an odd sequence of events where one girl carries a snail and places it on the statue of a Buddha’s head sitting in the middle of nowhere and others react to this in differing ways, before the man comes and simply eats the snail. There is also an amusing sequence where Yoshikatsu Fujiki takes on Meisa Kuroki in combat, is repeatedly killed by her and keeps having his life restored only for her to kill him again within seconds each time.