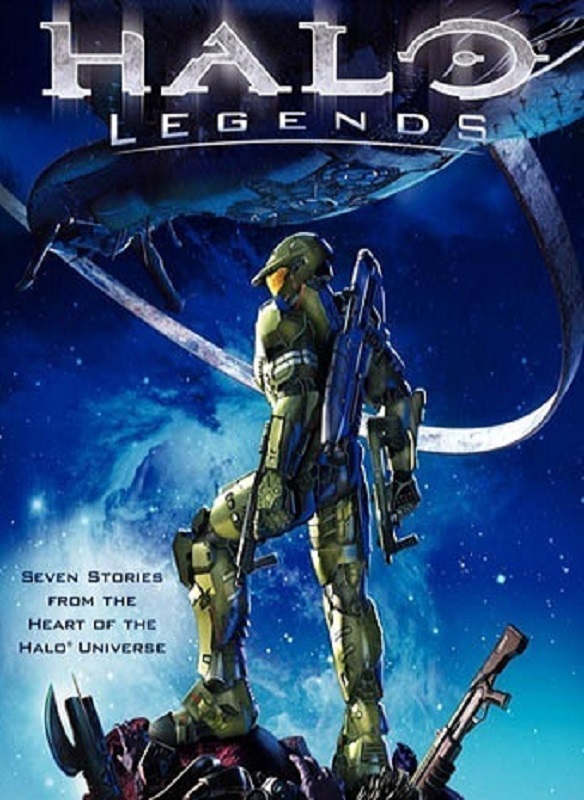 Origins:- In the long distant past, the galaxy faced an insidious threat from the parasitic alien lifeform known as The Flood that sought to attach itself to every sentient organism. The only solution was for the race known as The Forerunners to construct a vast weapon known as Halo that eliminated all living things in the universe. Samples of all life were placed in suspended animation to be revived after everything else was exterminated. Origins II:- After the universe was reseeded, humanity grew up on Earth and then expanded out across the galaxy. There humanity soon came up against the alien race known as The Covenant, which resulted in war. The two races were forced together against the renewed menace of The Flood. The Duel:- On one world, The Covenant Arbiter Fal takes a defiant stance. This brings reprisals from his superiors, including their killing his beloved wife, in order to provoke him to a showdown. Homecoming:- On the war-torn Inner Colonies, several of the genetically engineered super-soldiers known as Spartan Twos make an escape from their hatchery. One Spartan warrior Daisy encounters the girl that she was cloned from. Odd One Out:- The Spartan 1337 is left behind on a planet where he encounters several stranded kids and must fight off an enemy soldier. He then receives surprising aid from the powerful A.I. of a crashed spaceship. Prototype:- One soldier has been nicknamed Ghost because he follows duty without allowing any emotions to intrude. On the weapons testing planet Argolis, the soldiers are commanded to evacuate in the face of a Covenant onslaught. Defying orders to destroy a prototype battle suit, Ghost instead takes the suit into combat against the enemy. The Babysitter:- A group of tough Hell Jumper commandoes are teamed with a Spartan warrior for a jump down into Covenant held territory to eliminate the Covenant Prophet and secure an alien artefact of unknown origin. The Package:- A unit of Spartans are sent into action with a ten minute window in which to conduct an assault on a Covenant fleet and retrieve a captured package. However, the Covenant troops have laid a trap for them.

Halo is a hugely successful videogame from Microsoft Studios, first appearing with Halo: Combat Evolved (2001) designed for the Xbox, and passing through seven different versions since then, as well as several spinoffs. Halo rapidly became one of the most acclaimed modern videogames. In essence, Halo was a first-person shooter game but what made it a cult item was the epic scope of its story, which took place amid a vast galactic war between humanity and the alien Covenant, with the threat of the parasitic lifeform known as The Flood in the background. The game offered a range of locations but the principal one was the titular Halos – a concept derived from Larry Niven’s novel Ringworld (1970) – a series of artificial ring-like structures built as vast habitable surfaces encircling stars that, during the course of the game, are discovered to be artefacts left by The Forerunners to eliminate all life in the galaxy and prevent the threat of The Flood. Halo has been regarded as one of the top videogames out there and its popularity has seen its adaptation into a series of spinoff novels and comic-books.

There was interest in a live-action Halo film between 2005 and 2007, which would have been produced by Peter Jackson with a script by Alex Garland, the author of The Beach (2000), 28 Days Later (2002), Never Let Me Go (2010) and Dredd (2012), and to be directed by Neill Blomkamp who went onto make District 9 (2009) for Jackson after the collapse of Halo. The project ended up falling through because of the huge budget that required collaboration between two studios, 20th Century Fox and Universal, who backed out and refused to accept Peter Jackson and Microsoft’s demand for large cuts of the upfront box-office gross. For now, this anime compilation package is the only film version of the game that we have, although there were also two subsequent web-series, the low-budget Halo 4: Forward Unto Dawn (2012) and the very good Halo Nightfall (2014), both of which were later released as films.

First there was Final Fantasy: The Spirits Within (2001) but it was the Wachowski Brothers who sparked a trend when they commissioned The Animatrix (2003) – which Studio 4oC were also an instrumental part of – as a series of animated spinoff tales from The Matrix (1999). The Wackhowskis toured Japan, selected a series of anime directors and gave them the assignment to make a series of self-contained short films set in the Matrix universe. A similar idea was conducted with Batman: Gotham Knight (2008), hiring a group of anime directors to each deliver a series of Batman animated shorts. With Halo Legends, the same concept has been applied to the world of the Halo computer game.

The two finest episodes of the film come at the very start with Origins and Origins II, both from Studio 4oC and relative newcomer directors. The two stories, drawing from the elaborate back history created by the Halo games, between them create one of the most epic canvases that any science-fiction film has ever written itself on. The first story starts with the long forgotten Forerunners who came way before humanity, obliterated all life in the universe to save it from invasion by the parasitic The Flood and then created an ark of preserved genetic samples, while the second part takes up at the start of human history, all of which is passed over in a matters of minutes, and then out into humanity’s future among the stars and the encounter and war with The Covenant, before the two species are forced to cooperate against the renewed menace of The Flood. Such an epical scale of a story that sweeps across entire epochs of time is something that has only been covered before in written works of science-fiction such as the books of Olaf Stapledon and Isaac Asimov’s Foundation series. The results are dazzling.

The third episode The Duel comes from celebrated anime director Mamoru Oshii, best known for Ghost in the Shell (1995), Avalon (2001) and The Sky Crawlers (2008). Oshii merely supervises newcomer Hiroshi Yamazaki who sits in the actual director’s chair. Oshii and Yamazaki have chosen to make the episode in an animation style that has the feel of being hand-painted in watercolours, which certainly creates a unique look when it comes to the action scenes. Story has always been less important for Mamoru Oshii who tends to get wound up in overly complex metaphors – the one here could have worked as a traditional non-fantastic samurai story with almost no rewriting and does leave you grasping somewhat trying to follow the details of the relationship between the two nemeses and their oaths.

Homecoming comes from directors Koichi Mashimo and Koji Sawai who have both worked on numerous anime tv series, in particular .hack//SIGN (2002) and various of its spinoffs. It is an okay episode, although the narrative structure flashing back from a war zone seems initially confusing and takes some time to show you where the story is going. Coming after The Duel, Homecoming opts for a far more traditional anime look in its characters. The episode reaches a passable end in its confrontation between clone and original but is nothing standout.

Odd One Out from Saisuke Nishio, a director on numerous incarnations of Dragon Ball Z, is the head-scratcher of the compilation. Where all the other episodes are serious and mostly centred around tough marines in war scenarios, this opts for more traditional anime-type characters and battle scenes. This episode has a clearly comedic tone – the wackiness sets in from the kids turning up on dinosaurs and goes upwards from there. The episode is silly and eminently forgettable, leaving you only wondering what the decision was to include it here.

With Prototype, the anthology starts to find its ground again. Directed by newcomers from anime television, the episode has a hard edge typical of the action heavy focus you see in much science-fiction animation. There is a nicely grim humanism to be found here, something that anime can do well. And when the episode gets to the power-suited battles, it shows its strength with satisfying effect. The Babysitter from newcomer Toshiyuki Kanno is another worthwhile episode in a similar vein. There is a reasonable story and an emphasis on character rather than action, while the piece comes together with fair and satisfying effect.

Finally comes The Package from Shinji Aramaki, the most high-profile anime director to handle any of the segments, Aramaki having also made works like Appleseed (2004) and Appleseed Ex Machina (2007). Aramaki is one of the finest science-fiction/action directors in modern anime. He opts for much more of a CGI look to the episode and creates some fine and satisfying action scenes.

On the whole though, Halo Legends ranks as an interesting disappointment. It starts with epic ambition but the episodes seem bitsy, never to open up satisfyingly as stories. The problem for much of this is the vast scale of the Halo game and diverse species and player characters within it, resulting in the stories hopping around between different sides and lifeforms, which is confusing to anybody coming to the film without prior knowledge of the Halo universe. Some of the episodes during the middle gain their strength when they get to the action and combat scenes but these are nothing particularly standout, nothing that other science-fiction anime does not do with a great deal of regularity. There is so much more that Halo Legends could have been.