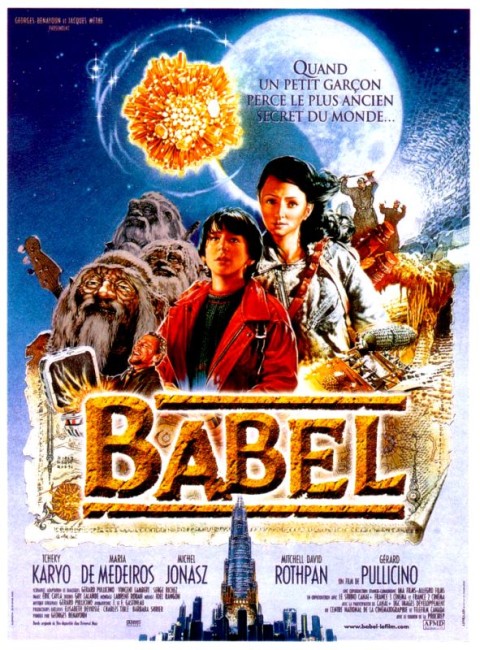 Young David Carat’s dog Woodstock brings home a parchment it finds in the sewer. David’s father writes one of his advertising punchlines on it and takes it to the office. That night all the tv sets in the household are shorted out by a lightning storm so David sneaks into school to get back the portable tv confiscated by his teacher so he can watch the documentary about his missing mother. There he is contracted by three Babels, small creatures thousands of years old, who need his help in stopping the billionaire Nemrod from finding the parchment. Nemrod needs the parchment to find the stone that came from the Tower of Babel, which he intends to activate that night during the millennial lunar eclipse, something that will unleash madness everywhere and allow him to rule the world.

For filmmakers in the 1990s, the approach of the millennium was like some projection screen for whatever social concerns they wish edto read onto it – and among these there were some very peculiar takes on it all. Besides all the usual predictions of doom, gloom and social collapse – Strange Days (1995), End of Days (1999), The Millennium Bug (1999) and variations on the Biblical End – The Book of Life (1998), Extraordinary Visitor (1998), we had everything from serial killer thrillers-come-quests for enlightenment – tv’s Millennium (1996-9); action films – End of Days; and Samuel Beckett-esque existential dramas – The Hole (1998) – as well as this oddity, a children’s film version of the Biblical Apocalypse.

Naturally, with Babel being a children’s film, the fire and judgement of the original Biblical Babel myth is considerably watered down. Rather than the Tower of Babel story being about human hubris, about people being judged for the presumption of building a tower to try and reach the heavens, whereas according to the film, the Tower of Babel was simply smote because one person built it in order to insert a crystal that would drive everyone else mad so they could rule the world. It is a move that takes the myth from showing humanity as arrogant by nature to one that sees humanity as essentially decent, and venality as something that is created by outside sources (a crystal and one greedy individual). Moreover, any reference to Biblical Jahweh is reinterpreted as the ecumenically PC “Creator – who some might know as God.”

Babel is a Canadian-French co-production that was shot simultaneously in French and English. In all regards, it is an insipid children’s film. The script manages some badly contrived plot devices – a vital map is brought home by the child hero’s dog whereupon his father writes an advertising jingle down on it and takes it to his office, which is in the villain’s modern Tower of Babel and just happens to stand right next to the hero’s school; the hero’s teacher just happens to moonlight as the villain’s chief computer tech; while the young hero just happens to stumble into the midst of the villain’s scheme and the Babels’ attempt to save the world when he sneaks into school at night to steal back the portable tv set that his teacher confiscated so that he can watch a tv documentary about his missing mother after all the tv setss in his home are blown up by a lightning storm.

Director Gerard Pullicino also scripted the film and composes the score – and in every department, his work falls to a singular banality. Almost all the supporting characters in the film – the father, the father’s scheming girlfriend, the father’s boss and the villain’s two henchpeople – are played with a buffoonish shrillness. As the father, Michel Jonasz gives less of an impression that he is a single parent than he is a slapstick mime artist.

The effects are mediocre and the Babels not very convincing – their lip movements never synch with the dialogue. Worse, the Babels, as seems virtually requisite for any short person in a children’s film, never seem to do much more than take comic pratfalls. Being non-human characters they quickly appropriate modern colloquialisms – at the film’s low point, Gerard Pullicino has them doing an impromptu stage rendition of ZZ Top.