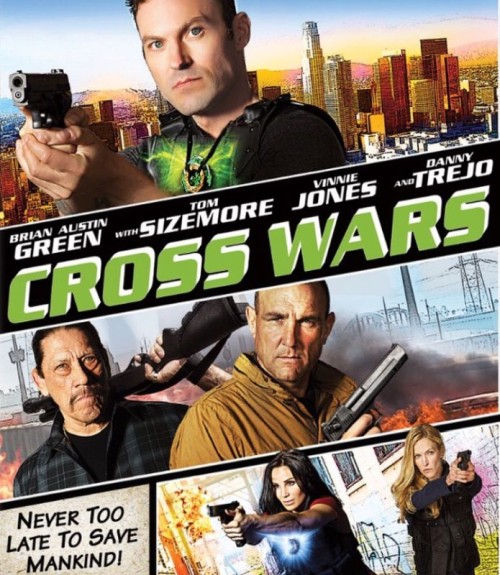 Callan leads his team of mercenaries against a new villain known as Muerte who has set out to take over control of the crime operations in L.A. Muerte has prepared a series of traps for them and has his acolytes blow up the warehouse that Callan’s team use as a base. Muerte’s henchmen then attack Callan in a bar as he meets his ex Riley who heads a girl-gang of crimefighters. Callan suggests that Riley and her girls move in with them at their safe house and that they combine forces. Callan then discovers that their nemesis Gunnar is not dead as they thought and has returned seeking revenge against Callan, as well as to complete his plan to destroy everybody on Earth so that he can finally die.

Cross (2011) was an independent action film directed by Patrick Durham who had produced several low-budget horror films elsewhere. I reviewed it here as it had a number of fantasy elements, including an immortal villain and hero Brian Austin Green wore an amulet of power. Director/writer/producer Durham also appears as the mercenary known as War in both films.

Cross Wars is a sequel to Cross, even though I doubt there are many people that were burning for more adventures. (The end credits also announce a third film). I didn’t think that Cross was a particularly great film. It showed a lack of discipline in the story department, which frequently seemed all over the place. None of this seems to have been tidied up by the time of Cross Wars. This is most evident in the fact that the first third of the film introduces Danny Trejo as a major badass villain who is taking over and eliminating all the crime in the city and appears to be targeting Callan’s team and a rival all-girl gang of mercenaries. However, after introducing this menace, Muerte is forgotten about and we instead get a reintroduction of Vinnie Jones, the immortal villain from the first film. It is as though the production team either ran out of money to afford Trejo or else Vinnie abruptly found he had a gap in his schedule and the film was hastily rewritten to include him.

There is also no explanation why so many teams of mercenaries are running around L.A. – let alone why the LAPD would not react with maximum force and try and stop so many heavily armed vigilante teams in an urban area, or even how the group manage to finance the considerable amount of firepower and accessory equipment they come armed with. The other ridiculous thing to me was the framing story, which has a mother reading a comic-book to her son as a bedtime story – the whole idea of someone reading a comic-book aloud seems so absurd that it left me giggling.

Cross engaged me to a passable extent but Cross Wars seemed tedious. One of the biggest killers of the film is the introduction of Jumahn Jones to the team. He gives a performance that seems modelled on Chris Rock, consisting of a never-ending stream of inane banter and one-liners in the middle of every situation. In the opening scenes he is rambling on about what he had for lunch while they search a junkyard and you start to tire of the character within about five minutes of his introduction. It is this constant need to give the team a series of nonchalant flip banter that feels badly forced and something at which Patrick Durham has little affinity in directing.