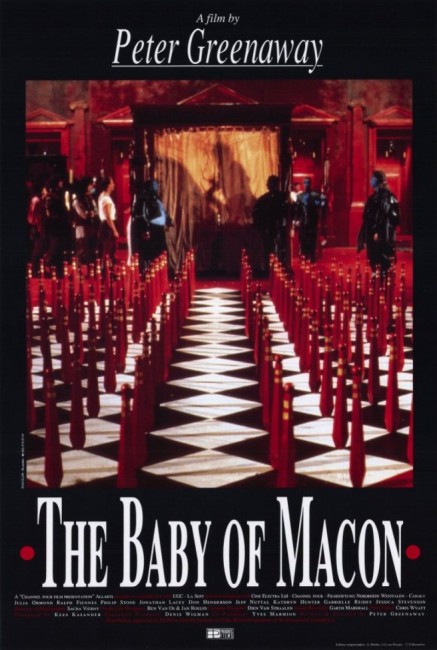 In the year 1600 in the Italian town of Mâcon, a disease-ridden old crone gives birth to a baby. However, people refuse to believe that a beautiful baby could be hers. Taking the opportunity, another woman quickly claims that the baby is hers and that it was Immaculately Conceived and delivered via virgin birth. The woman uses the townspeople’s awe to claim privileges, all the while keeping her parents caged up so that the truth cannot be known. The woman tries to seduce the bishop’s son but the baby miraculously kills him in order to protect the woman’s virginity. When the woman then suffocates the baby, the bishop retorts with a horrifying punishment – having the woman raped 206 times by sanctified soldiers.

Greenaway’s films often feel like the cinematic equivalent of the literary game of oulipo – a game wherein an author say may try to write a story in which the letter ‘a’ isn’t used or where every word starts with ‘T’. Greenaway’s films are constructed as much, if not more so, in terms of their visual games and patterns as they are for their narrative – Greenaway is frequently fascinated with numerical sequences and the repetition of unimportant detail.

The other thing that strikes unmistakably about a Peter Greenaway film is the sumptuousness of its decor – its rich costumery, lavish dressings and densely textured tableaux, which sometimes verge on comically ornate over-elaboration. Greenaway films are also like rituals – The Baby of Mâcon at times suggests the elaborate progression of a High Anglican service, particularly during the scenes where the baby is dressed in luxurious clerical garb while a clergyman ritually reads out a series of high-flown symbolic names for each piece, or the baby’s accompaniment by a clerical tenor who sings all its pronouncements a capella.

The cinematic game that Greenaway indulges in The Baby of Mâcon is a meta-fictional one. (See Meta-Fiction Films). On one level, there is the drama of the film, yet we also see that a period audience is watching this as a play. Greenaway readily blurs the line between the film, the play and the real lives of the actors outside of the play into one stage with no dividing line between any of the three. In one lovely moment, the daughter is judged and the prince is distraught only to be told by one peasant, “It’s only a play.” “Shall it all be words and music?” the prince despairs. “Sir, be grateful for the music,” comes the peculiarly haunting reply.

Greenaway will pull back from scenes of powerful emotional impact – Ralph Fiennes’s death scene – to show an audience watching what is going on with striking effect. Greenaway even includes on-screen set changes between different scenes with blue-skinned characters appearing as stage handlers. At the end of the film, the cast bows to the play audience and then step past them to take their wigs off and bow to the cinematic audience.

In one remarkable scene, Greenaway tries to do his equivalent of Rope (1948) – the film that Alfred Hitchcock directed all in eight shots – with a single shot that goes on for some eight minutes and moves between several different scenes – from the church where the bishop condemns the daughter, to the military barracks filled with showering soldiers, to the bed where the soldiers line up for the bishop to bless them then wait their turn to rape her, an act we sit through watching thirteen times.

Peter Greenaway’s origins are in the English arthouse, yet for some time Greenaway has been pushing a social taboo-breaking edge – witness The Cook, the Thief, His Wife & Her Lover and its assault on the pretension of good eating that eventually ventured over into cannibalism; The Pillow Book, which combined sex, calligraphy and revenge; or Drowning By Numbers with its elegant rondeau about husband killing; and 8½ Women and its smorgasbord of sexuality. Greenaway takes a considerable glee in battering away at the sensibilities of the arthouse intelligentsia that initially proclaimed him a genius. Indeed, Peter Greenaway may well be the only consistent director to be acclaimed more by the arthouse than he is by the genre he most ends up in – horror.

The Baby of Mâcon, which never received a proper release in the US because of its content, assaults an audience with such images as infanticide (in the disturbing final moments the townspeople saw the baby apart up and take parts of it as fetishes), a bishop sanctioning his own daughter to be raped 206 times so he can kill her, and other such brutalities on good taste.