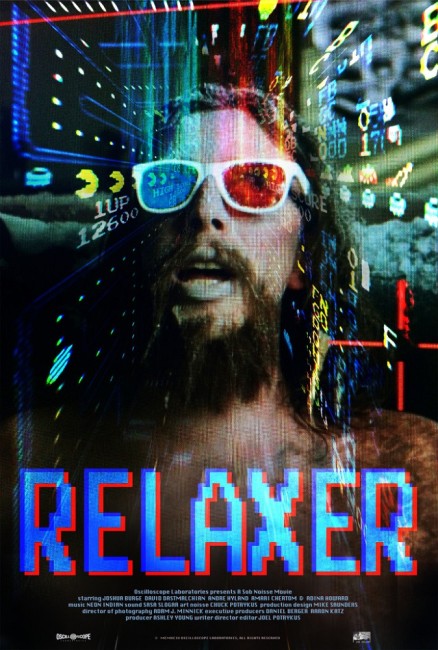 It is nearing the end of 1999. Abbie Havemeier sits on the couch in his brother’s apartment. His brother Cam constantly offers a series of challenges and calls Abbie a loser for his failure to complete any of them. Abbie accepts a challenge to get past the 256th level of Pac-Man. The challenge is made difficult by Abbie not being allowed to move from the couch. While Abbie sits there, determined to complete the game, various others visit. These include his friend Dallas who refuses to give Abbie supplies without payment and janitors come to release bug bombs. Throughout this, Abbie attempts to obtain something to drink. At the same time, the Y2K Apocalypse strikes outside and plunges the world into chaos.

Relaxer was the fourth film from Joel Potrykus. Potrykus gained a name as an indie filmmaker with Ape (2012) and Buzzard (2014), both also starring Joshua Burge who also plays the lead role here. I previously reviewed Potrykus’s The Alchemist Cookbook (2016) with Ty Hickson living in a cabin in the woods where he may have summoned The Devil or just as equally have gone off his meds.

Relaxer is a film that comes with a “WTF am I watching?” quality to it. This begins from the moment the film opens where instead of opening credits we get the end credits – the list of thank you, assistant directors, caterers, copyright notices etc – playing out. Relaxer is conceived as an absolutely minimalist film. It is set in a single room and consists of several progressive scenes (almost like the acts of a play). Throughout these, Joshua Burge remains seated on the couch – in fact, while the couch is a multi-seater he does not even move from the same cushion on the couch – wearing only a pair of boxers. The film also seems to have a weirdly condensed timeline where you are not sure if it is taking place over the course of days or, as the end would seem to indicate, several months.

From the opening scene, the film plays out in ways where you are shaking your head in disbelief. The first scene takes place as an extended conversation between Joshua Burge and older brother David Dascmalchian through which the two are constantly issuing challenges to each other, all of which seem to operate by a series of bizarrely incomprehensible rules. Dascmalchian’s in-the-face bullying of Burge makes the scene an uncomfortable watch. The most out there moment is where Burge urinates into a plastic two-litre container of milk while Dascmalchian is out of the room and is then bullied by Dascmalchian into drinking it, resulting in an explosion of liquid as Burge vomits up everywhere.

The second scene (for want of a better description) comes when Burge calls up friend Andre Hyland and gets him to bring supplies over. However, Hyland refuses to hand them over without being paid there and then stands doing a strung-out stand-up act at a motormouth pace that involves much quoting of dialogue from Jerry Maguire (1996). This comes amid him trying to conduct tasks with two bottles of soda attached to either hand with masking tape, before the bottles explode, whereupon he taunts Burge by pouring the contents into a janitor’s bucket and then throwing the empty bottle at him.

As here and in the subsequent scenes, there is a constant cruelty being inflicted on Joshua Burge. This goes from the bullyings by brother David Dascmalchian to Andre Hyland’s withholding the bottles of soda for non-payment and even throwing an exploded bottle at Burge. You watch these being inflicted in considerable discomfort – Burge’s pleadings just to have a drink or a sandwich that has been sitting in the microwave (for what may have been weeks) and, following Hyland’s departure, the attempts to use a claw arm to pick up the fallen drink cup from the coffee table, all without moving from the same spot on the couch.

The situation becomes increasingly more surreal with the arrival of the two janitors who proceed to plant a bug bomb. In one hilarious scene, they pick up and move the couch with Burge still on it, while he asks “Could you move me over to the kitchen so I could get something to eat?” At the end of the scene, we see the room filled with yellow bug bomb fumes in the midst of which Burge sits continuing to play the game while wearing an industrial facemask, lifting it to eat some of his sandwich.

As the situation becomes even more surreal, we see Joshua Burge seemingly use psychic powers to break the glass of the window so that he can lift the soda cup out the window on the end of his taped together combination tripod and claw arm to get some water only to lose the cup. He then uses his tripod contraption to bash a hole in the wall so that he can reach over and get some water from the pipes – only for someone upstairs to flush the toilet and he be drenched in a wash of shit.

The most surreal is the final scenes where The Millennium occurs, although we seem to be in an alternate reality where the Y2K bug did occur and the world descended into a Social Collapse. We see Joshua Burge clearly some months later – or at least where it is now winter outside (and he is still dressed in his boxers) and having grown out a straggly beard. We even see him cooking what look like bits of shoe leather on a small campfire on the coffee table made using the tripod, while later we find that he has been eating the dead bird. His brother and a girl companion return, clearly now survivors looking for whatever supplies they can, and find Burge still there.

There are hints that Burge might have psychic powers – when he appears to cause the window to break and may be causing heart palpitations for Amari Cheatom. The final scene is an entertainingly ludicrous one where [PLOT SPOILERS] he finally gets up from the couch and uses his ability to cause David Dascmalchian’s head to explode Scanners (1981)-style.