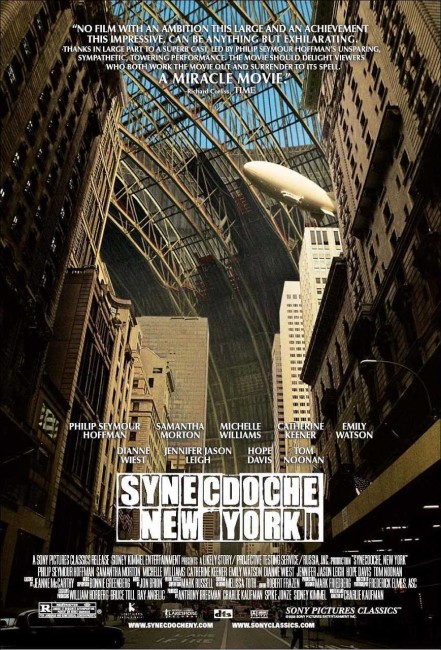 Caden Cotard is a theatre director living in Schenectady, New York. He is plagued by ill health and fears about mortality. After he directs a successful run of ‘Death of a Salesman’, his wife Adele goes to Berlin on her own with their four-year old daughter Olive and decides to stay there. Caden engages in a liaison with Hazel, the theatre ticket desk clerk but this does not work out very happily, and later takes up with the actress Claire Keen. Caden is then offered a theatrical scholarship in order to create his own production. He hires a vast warehouse space in New York where he builds a replica of various parts of the city as stage for his play and begins rehearsals. In a determination to be truthful, he hires actors to play the various characters in his life. However, as preparation and rehearsal drag on for years going into decades, the people in Caden’s life and the actors playing the equivalent characters start to blur into one.

Charlie Kaufman is one of the most exciting of modern screenwriters. Kaufman first gained attention with the hit of Spike Jonze’s Being John Malkovich (1999), which set out to confound and twist an audience around with its sublimely wacky play of ideas. Kaufman subsequently went onto write the script for George Clooney’s hilarious directorial debut Confessions of a Dangerous Mind (2002) about gameshow host Chuck Barris’s supposed double life as a CIA agent and Adaptation. (2002) for Spike Jonze. Adaptation. started as a standard adaptation of a novel where Kaufman clearly became bored halfway through and turned the process of adaptation into an amazing meta-fiction that kept shifting between the filmed story and a meta-narrative concerning Nicolas Cage playing both Kaufman and Kaufman’s (fictional) idealised twin brother self (who also received co-screenwriter credit). Kaufman’s most acclaimed screen work was Eternal Sunshine of the Spotless Mind (2004) for Michel Gondry, a conceptually ingenious and mind-bending weave of memory and science-fictional devices that became an audience hit. Synecdoche, New York was Charlie Kaufman’s debut as a director.

We have an enormous amount to be grateful for in that Charlie Kaufman has not been swallowed up and crushed by the Hollywood system and that his work retains its individuality thanks to the unique directors assigned. The writer that Kaufman reminds the most of is Britain’s Dennis Potter, who usually wrote works for tv and occasionally film with the likes of Pennies from Heaven (1978), Brimstone and Treacle (1982), Dreamchild (1985), The Singing Detective (1986), Track 29 (1988), Blackeyes (1989), Lipstick on Your Collar (1993), Cold Lazarus (1996) and Karaoke (1996). (Maybe you could call Charlie Kaufman a Dennis Potter shot through with the self-loathing comedic angst of a Woody Allen).

Potter’s work was wrapped in incredible layers of meta-fiction that constantly blur a line between fiction, the fantasies of writers and daydreamers and the real world they live in. There are a great many similarities between Synecdoche, New York and Dennis Potter’s masterpiece The Singing Detective – badly remade as the film The Singing Detective (2003) – in both, a creator that is clearly a stand-in for the author creates a deeply personal work while suffering from ill health but soon the fictional work comes to overtake their life altogether and blur into their deepset personal issues. In both, you get the impressions that Potter and Kaufman are writing something autobiographical.

Like Woody Allen (and Dennis Potter), Charlie Kaufman seems to believe that self-examination and analysis is the ultimate in creative honesty on screen. To this extent, Kaufman’s characters are constantly rent with self-loathing – Jim Carrey in Eternal Sunshine, Nicolas Cage as Kaufman in Adaptation. in envy of the success enjoyed by his more successful twin brother. Philip Seymour Hoffman’s Caden Cotard here is the ultimate expression of that – where Hoffman has been made up with an incredibly unbecoming haircut and skin pallor, not to mention is constantly afflicted by infections, pustules, twitches and health worries both real and imagined. Indeed, it is perhaps the film’s one credibility hole that so many women seem attracted to such an ugly and essentially unlikeable character.

Synecdoche, New York was a very divided film when it came out and not a huge success. A large part of the problem is the density of the work that Charlie Kaufman throws at us. Synecdoche, New York is not always an easy film to work with; it becomes wound up in so many layers of meta-fiction and with jokes that Charlie Kaufman wants to make or points he has to say, that trying to follow everything becomes a major strain. Looking through other reviews and online comments, audiences seem divided 50/50 on whether they liked the film and found a brilliance to it or regard it as depressing and too difficult to follow. One suspects that some of this has to do with audience expectation – it certainly helps a good deal to go into the film familiar with Charlie Kaufman’s love of mind-bending games and meta-fiction.

I am happy to confess that I belong to the crowd that found a brilliance to Synecdoche, New York. No denying, the film is a headache to follow and is one that you need to return to a second time to want to explore more of it. The measure of this is that it is one of the few films that I immediately wanted to return and watch again for this very purpose – most films that one ends up reviewing have the feeling that you have grasped everything they have had to say the first time around.

Charlie Kaufman takes his time leading into the main parts of the film, taking us through Philip Seymour Hoffman’s ailments and separation from his wife Catherine Keener. But for the characteristic Charlie Kaufman sense of humour – the punning confusions between neurologist and urologist, or psychosis and sycosis – these scenes could be a relatively ordinary comedy. As we become drawn into Philip Seymour Hoffman’s massive theatre project, Synecdoche, New York starts to become increasingly more surreal. Time seems to collapse and the world outside the theatre plays out at a dilated rate the deeper Philip Seymour Hoffman becomes embroiled in the world he is trying to depict.

There are appealingly surreal touches – like Samantha Morton who buys a house that is on fire and seems to spend something like thirty years with it continually burning while she lives there (before eventually dying of smoke inhalation!); Tom Noonan who appears throughout various scenes, sometimes even inside Philip Seymour Hoffman’s house, and then turns up to an audition, announcing that he has been watching Hoffman all his life before being cast as Hoffman’s stand-in inside the play; Hoffman being driven to return to ex-wife Catherine Keener’s apartment and clean it night after night and then casting a woman (Dianne Wiest) to perform the role in the play in a perfect simulation of the apartment, before he then allows Weist to take over his own role and becomes an actor in the play, playing her part as Weist playing him feeds him instructions through an earpiece as to what to do, even issuing instructions like “die now”.

Like Wim Wenders in films such as Wings of Desire (1987) and Until the End of the World (1991), Charlie Kaufman aches with the effort and impossibility of trying to squeeze all of the world into an artistic frame. Synecdoche, New York is about a great many things – one of them being the obsessiveness of trying to artistically use one’s own life as a text; other parts with his desire to say something about the fragility and futility of life.

The most head-spinning aspects are when the play becomes so wound into itself that Hoffman has to cast actors to play the people in his life and then when those actors become wound into his life too he has to cast actors to play their parts, resulting in he and assistant Samantha Morton moving about followed by the actors playing them and then the actors playing the assistants all mimicking and dressed as the person in front of them.

There is a considerable ingenuity to the scenes where Tom Noonan as Hoffman’s stand-in starts dating Samantha Morton and so Hoffman becomes involved with the actress playing Morton (Emily Watson) and his frustrated desire for Morton starts to play out; or scenes where domestic arguments play out on a stage, cutting between Hoffman as director addressing the characters in the scene, which blurs into him having domestics and addressing the character as though they were his girlfriend.