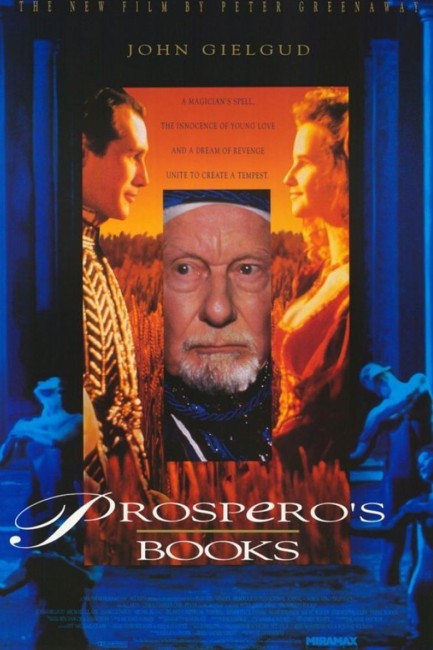 Prospero, the Duke of Milan, lives in exile on a remote island, with the company of his daughter Miranda and a number of spirits he has managed to tame. Using the magic contained in his collection of books, he conjures a tempest to sink a ship containing several of his former compatriots who have come searching for him. Ashore, his friends join with the island’s original owner, the beast-like Caliban, in a plot to kill Prospero.

Prospero’s Books is eccentric arthouse director Peter Greenaway’s uniquely individualistic take on William Shakespeare – an adaptation of one of Shakespeare’s more overtly fantastical works The Tempest (1611). One is tempted to remark that Shakespeare loses.

What Peter Greenaway does is use Shakespeare more as a text to bounce his accustomed eccentricities – almost ritualistic runs of numerical sequences and recitations of arcane lists throughout – off. The resulting effort emerges more of a gay pride parade than anything resembling classic Shakespeare. The screen is packed with nude dancing nymphs of both sexes; Caliban is nude, bald and painted in mottled pink and purple body paint and is sent to twist his way through the sets like a centipede with back pains; the costume designers have planted their tongues in cheek and gone absolutely wild – the visiting Milanese, for instance, are dressed in three foot diameter Francis Drake collars, even wider brimmed feathered hats and platform soles to hysterically funny effect; paper is blown through the sets right throughout the film; random, often endlessly repeated images are inserted in the middle of the screen in boxed inserts and overlays.

The film opens on an amazingly silly scene with swimming mermaids and John Gielgud attempting to conjure up the tempest while bathing in a swimming pool with a toy ship at the same time as a nude boy nymph urinates into the water. Greenaway treats John Gielgud as though he were a clockwork Shakespeare-spouting automaton to be wound-up and sent moving obliviously through the caterwauling mardi gras as just another absurdity in the spectacle. To add confusion to even those familiar with the play, John Gielgud voices all the character in the film while Ariel is played by several different actors, the effect of which is naturally thoroughly bewildering.

All of which might have been interesting as a three-and-a-half minute music video but when dragged out to two-and-a-quarter hours almost collapses under the unintentional hilarity of the exercise. This is the usually entertaining Peter Greenaway probably at his most pretentious. The actual images and recitations from the titular books do look more interesting than anything else, created as they are with some amazing computer animation and optical effects.

Other adaptations of the The Tempest include:– the famous Forbidden Planet (1956), which relocated the story in science-fictional terms; Derek Jarman’s fine The Tempest (1979); Paul Mazursky’s modernised Tempest (1982); The Tempest (1998), a tv version that locates the story during the American Civil War; and Julie Taymor’s visually fantastical The Tempest (2010) with a female Prospero.