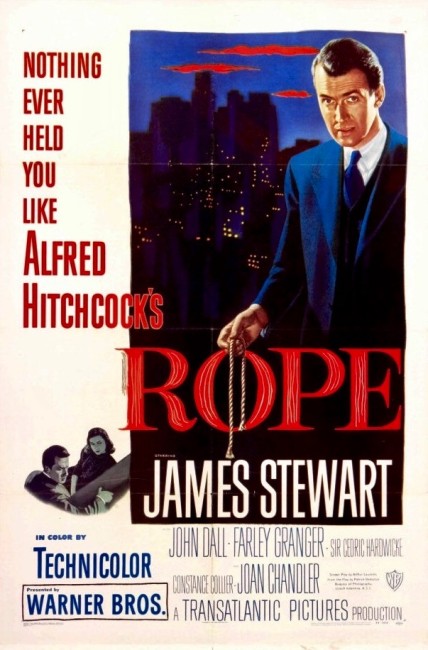 Two university student roommates, Brandon Shaw and Philip Morgan, strangle their friend David Kestler with a rope. They place the body in a chest in the centre of their apartment. They then use the chest as the table at a dinner party, inviting David’s e and father to attend, unaware they are dining right above David’s dead body. They also invite their old college professor Rupert Cadell, playing a game with him, determined to demonstrate how they have put into practice his Nietzschean theories that the intellectually superior are able to defy ordinary moral laws, by showing how they have gotten away with murder.

Among the many great masterworks that he made during his lifetime, Rope is one of the more overlooked films in Alfred Hitchcock’s canon. It is one of Hitchcock’s most peculiar films – indeed, one of the most unique experiments ever conducted as a film.

The film is based on a play that was first staged in 1929. When it came to filming the play, Hitchcock decided to shoot the film as though it were a play. Thus the whole film takes place in only eight takes. At the time, the maximum length of film that cameras could hold was around ten minutes and so each shot is around 8-10 minutes in length. The transitions are subtly denoted by cuts when everybody is out of frame or when the camera moves behind someone’s back.

The gimmick works surprisingly well. The script is tight and it is this that drives the suspense. Within the limitations of his ten or so shots, Hitchcock manages to move his camera to underline the tension with a surprisingly fluidity. Hitchcock had the walls built on hinges and the furniture placed on rollers so that it could be taken out of the way as the camera moved about. The film becomes a small masterpiece of choreography – in particular, there is a beautiful set-up at the end where James Stewart reenacts the murder and the camera moves in and out of closeup following all the actions. (This was also incidentally Hitchcock’s first film in colour).

Hitchcock’s dark obsessions lie underneath the film in ways that were far more out there than any other thriller of the era. It is these that make Rope of considerable interest to the psycho genre. Unlike many of the other thrillers and film noirs of the era, the plot does not concern itself with the whodunnit aspect and the usual suspense unveilings. Rather Hitchcock is interested in getting inside the perverse psychology and motivation of the characters. The film’s study of decadent morality, full of Nietzschean philosophical justifications, is particularly fascinating. The central premise – where the students murder someone, hold a dinner party for his family using the chest that contains the body as a table and even wrapping some books for the victim’s father in the titular murder weapon, holds a wonderfully ghoulish perversity.

There is even the suggestion that the two students are gay, something quite daring for the time the film was made. Rope is loosely derived from the notorious true-life Loeb-Leopold killings in Chicago in 1924 wherein homosexual lovers Nathan Leopold Jr and Richard Loeb, both university students, stabbed fourteen-year-old Bobbie Franks with a chisel and dumped acid over the body, all acting according to Nietzschean theories of moral superiority. The Leopold-Loeb story has also inspired several other films – see also Compulsion (1959) and Swoon (1992). This is something that Hitchcock is not unaware of and even plays into, casting Farley Granger and John Dall, who were both gay in real life, as the two killers. In a perverse turn the script is written by Arthur Laurents who was Granger’s live-in lover at the time.

There is some good acting, particularly from John Dall who plays with an arrogant sneer, delighting in the game and refusing to even give in in the end. On the other hand, Farley Granger’s obvious twitching paves the way to his cracking all too clearly from the outset. James Stewart appears in the first of several roles for Hitchcock. There is a relative surprise, when one is used to his typical lazily rambling performances, of seeing Stewart play with a keen alertness.