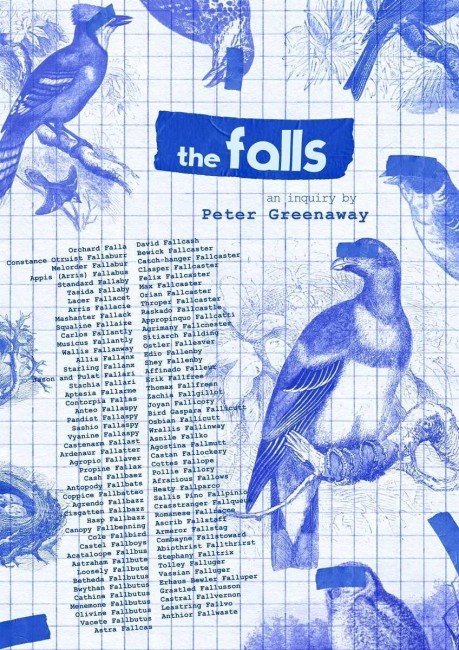 A documentary depicts the effects of a catastrophic Violent Unknown Event. 92 people whose names all begin with ‘Fall–’ have been chosen from the register of survivors and profiled, with the documentary showing how each has begun to mutate, develop new languages and an obsessive fascination with birds.

The Falls, as might be expected from any film by Peter Greenaway, is a work of thorough eccentricity. It is an hilarious piece of abdurdist storytelling presented as a work of cod deadpan documentarism. The project feels as though Greenaway had started off playing the old creative writing class game of taking at random several photos or a piece of film and coming up with an off-the-cuff story to connect them – indeed, a character plays a variation on this very game in Greenaway’s A Zed and Two Noughts (1985). (It is an economical move on Peter Greenaway’s part that allows him to construct an entire film using stills and pieces of film that appear to have been cannibalised from virtually anywhere).

The Falls purports to profile 92 people, each of whom has survived a Violent Unknown Event (the details of which, almost in a parody of The Picnic at Hanging Rock (1975), are kept conflicting and deliberately unclear). Each develops an obsession with birds and flight in some eccentric way, along with peculiar languages (which allows Greenaway to conduct some marvellous cod linguistic anthropology) and peculiar mutations. For each of the 92 profiled, Greenaway wanders off to tell some wonderfully nutty little story – in one of the funniest moments, one character develops the theory that the Violent Unknown Event was orchestrated by Alfred Hitchcock in order to deal with the unexplained ending of The Birds (1963).

The film is filled with many characteristic Greenaway-esque touches – the peculiar fascination with the cataloguing of seemingly trivial details; numeric sequences – the number 92 has a recurring significance; wilfully eccentric connections of logic; the farcically straight-face sense of humour. One can even note odd in-references to other Peter Greenaway films – there are several mentions of his earlier shorts Vertical Features Remake (1976) and A Walk Through H (1978). One of the biographies also makes mention of the three Cissy Colpitts’ who would later become the three central characters of Greenaway’s Drowning By Numbers (1988).

The Falls is a genuinely eccentric film. Eccentric as much for Peter Greenaway’s drolly absurd sense of humour as for the fact that he has devoted three hours to it – indeed the session that one was at ended with at least half the audience walking out. For all that, The Falls is an undeniably likeable film.