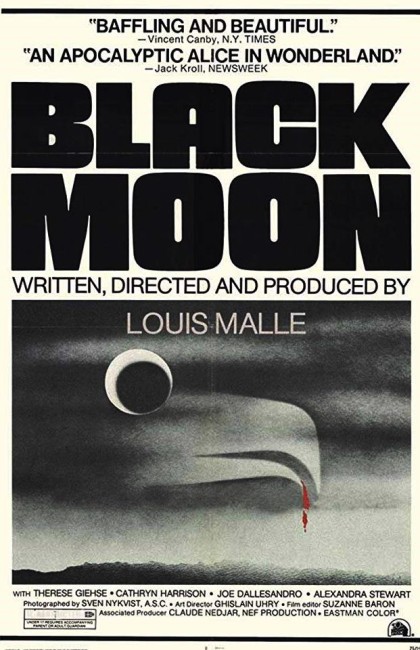 A young girl Lily travels through the countryside as society collapses around her. On her journey, she encounters unicorns, singing flowers and talking animals. She comes to a farmhouse where an old bedridden lady lives with her son and daughter who are both also named Lily. The old lady dies but later is alive and well. Lily tries to make sense of the strange happenings around her.

French director Louis Malle came to fame in the late 1950s with the thriller Elevator to the Gallows/Frantic (1958). Although he was around at the time of the French New Wave, Malle was never a part of it. He made various films over the next decade with the likes of The Lovers (1958) and Lacombe Lucien (1974), but his greatest success came a few years later with English-language, US films such as Pretty Baby (1978) and in particular Atlantic City (1981) and the arthouse hit of My Dinner with Andre (1981). Malle kept up a consistent output of films until his death in 1995, alternating between French and English-language with the likes of Au Revoir, Les Enfants (1987), Milou en Mai (1989), Damage (1992) and Vanya on 42nd Street (1994). Other than Black Moon here, he only ever made one other venture into genre material with the William Wilson segment of the Edgar Allan Poe anthology Tales of Mystery and Imagination/Spirits of the Dead (1968).

While stating that Louis Malle was never part of the French Nouvelle Vague with its wilful experimentalism, shucking of narrative convention and flagrant surrealism, Black Moon could be said to be his one his dabble in the genre. (To this extent, he has even recruited Joyce Buñuel, daughter-in-law of the legendary surrealist filmmaker Luis Buñuel and later a director in her own right as his collaborator on script).

Malle had decided he wanted to make a film that used his home in the Dordogne valley in Quercy as location. He had also wanted to work again with Therese Giehse who had challenged him to make a film in which characters did not speak. Malle came up with the idea for the film after having a dream of Giehse lying in his bed. Much of the film was improvised and created without a clear script. The resulting film was released to a very mixed critical reception.

Exactly what Black Moon is about is a genuine scratch of the head. A number of other genre writers have pegged it as a science-fiction film. Malle stated that the setting is futuristic and that the social upheavals that we see in the background are the wars between the sexes, although this is something that is not clear solely from a watching of the film. Certainly, the film’s non-sequitir happenings place it far more with its feet in the camp of surrealism than science-fiction, while the unicorns, singing flowers and talking animals that turn up make it far more a work of fantasy. It perhaps falls into the same kind of science-fiction by virtue of a nominal absurdism that a number of other efforts from around this era such as French New Wave works like Jean-Luc Godard’s Alphaville (1965) and Weekend (1967), and the later likes of The Falls (1980) and Memoirs of a Survivor (1981) do.

The film is largely a picaresque of strange events where Cathryn Harrison plays a part not unakin to Alice in Wonderland (1865). She wanders through the countryside and grounds of the house where she encounters such oddities as an elusive unicorn (which is eccentrically not played by a white horse as you might expect but a stubby Shetland pony) and singing flowers. Therese Giehse sits in bed having strange one-sided conversations into a ham radio set and talking in squeaky nonsense speech to a rat that also talks back to her. At one point, she appears to die but is alive again a few scenes later.

There is a bizarre comic scene where alarm clocks keep going off in the bedroom and Cathryn Harrison is driven so crazy by them that she throws them out the window, only for another to keep going off. Nude children are constantly seen chasing pigs through the grounds. Cathryn Harrison seems to hear the thoughts of Joe Dallesandro and has a one-sided conversation with him where she answers what he is thinking at her.

Therese Giehse appears to have the mental ability to slam the door of her room shut and later humiliates Cathryn Harrison by repeatedly causing her knickers to fall down, while she sits in bed cackling uproariously and taking Polaroids of Cathryn’s embarrassment. There is the bizarreness of the scene where Alexandra Stewart comes into the bedroom and undoes her top so as to breastfeed her mother Therese Giehse, while Cathryn Harrison also inherits this role and does the same at the end. Exactly what all of this means is entirely baffling.

One of the great joys of the film is British actress Cathryn Harrison, the granddaughter of the celebrated Rex Harrison. Cathryn, who was only fifteen years old at the time, had previously appeared in Jacques Demy’s The Pied Piper (1972) and in Robert Altman’s very similar surrealist film Images (1972). She has a great beauty and moves through the film with an aristocratic elegance mixed with a child-like puzzlement. She is an actress that should have gone onto much greater work but seemed to only pass through sporadic British tv costume dramas since then. The other strange piece of casting in the film is Andy Warhol star and gay icon Joe Dallesandro who plays the role of the unspeaking brother who is also named Lily.