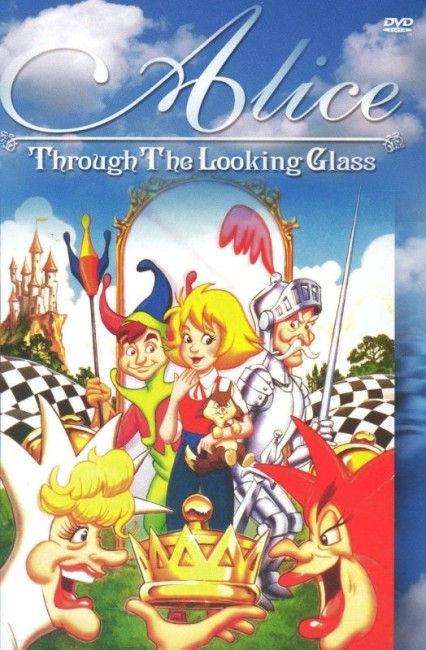 Young Alice is home on a snowy day when her father, a vet, has to go tend some animals. Alice walks through her mirror and finds herself in a fantastical land on the other side. Joined by the prankster/magician Tom Fool, she tries to find her way back out through the mirror again. She learns that in order to do so she must travel to the other side of the land, which is designed as a chessboard. If she makes it to across the eight squares to the other side, she will be crowned a queen and can move back at will. As Alice sets out, she encounters people and creatures inhabiting each square that are at turns bizarre, nonsensical and threatening.

This little-known animated film is an adaptation of Lewis Carroll’s Through the Looking Glass (1871), which was of course a sequel to Alice’s Adventures in Wonderland (1865). This adaptation, from veteran tv writer Jameson Brewer, does the crass and inconceivable thing – it modernises and Americanises Alice’s Adventures in Wonderland. Indeed, the film is less an adaptation of Through the Looking Glass than it is a version of Lewis Carroll that has been reconstructed to modern children’s movie formula. It does demonstrate one thing – that Lewis Carroll (who has the ignominy of being credited as Lewis Carrol on the credits) would never have been accepted in today’s children’s tv environment.

The film has only a passing resemblance to the books. There is the central idea from Through the Looking Glass of Alice travelling through a mirror and finding herself in a land modelled on a chessboard and having to make her way across to the other side to be crowned a queen. There are occasional sequences that have been replicated from the book – Alice taking a journey on a train that takes to the air; the meetings with the White Knight, Humpty Dumpty, Tweedledum and Tweedledee (who are now two argumentative joggers) and the Jabberwocky and the Snark (who are now standard moronic and cuddly children’s movie monsters).

Most of the rest of the film has been improvised from scratch. Sadly, the new creations have little of Lewis Carroll’s absurdism and are just fantasy standards – centaurs, unicorns and pegasi. There is the odd surreal moment – Alice finding herself in a carriage with a talking goat and horse and a character made out of newspaper who gets offended and insists that she stop reading him; the train that takes to the air to cross hills and goes underwater to cross rivers; the journey via a paddle boat that travels across an empty riverbed; and Alice’s encounter with the White Knight, where she apologises “I don’t have a lace hanky [to give you], but I do have a Kleenex.”

Even considering the rewriting of the story to children’s movie formula, the way that the quest has been pumped up is irritating. Alice is now given a companion in the trickster/magician Tom Fool but when you have a character that can do fairly much anything – teleport, transform attackers and the like – there is no threat and more importantly in terms of character arc no destiny that is ever earned upon Alice’s part. There are also a number of insipid songs.