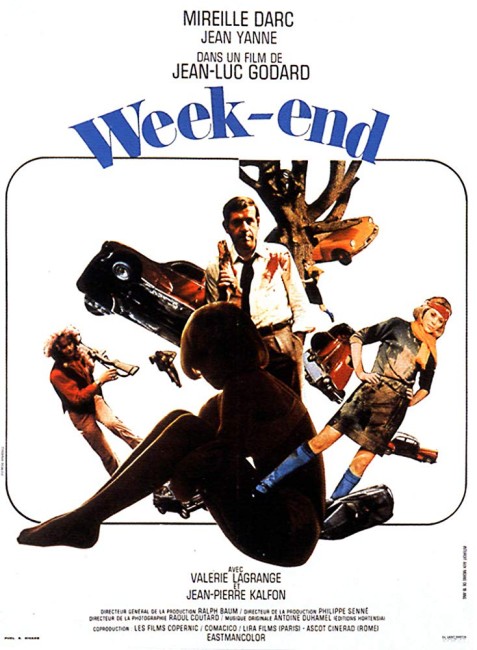 Husband and wife Roland and Corinne Durand drive out into the countryside for the weekend to visit her mother with the intention of squeezing money out of the inheritance. Along the way, they become embroiled in the increasing social unrest being enacted on the roadside. Their car becomes stalled in a massive traffic jam and they are forced to continue on foot. On their journey, they encounter everything from armed revolutionaries to historical characters and a man claiming to be God.

Jean-Luc Godard was one of the essential directors of the French New Wave or Nouvelle Vague. Born in 1930 and raised in Switzerland, Godard began writing for the influential French journal of film criticism Cahiers du Cinema. Godard’s first and most successful film was Breathless (1959), which became one of the key influences on the New Wave. There Godard took a traditional film noir plot and shot it through with ragged editing styles and a savvy cinematic self-referentiality that had audiences excited at the freshness of it. Godard then went onto a variety of other films, including the acclaimed character drama Contempt (1963), the flop anti-war film Les Caribiniers (1963), the controversial A Married Woman (1964), Alphaville (1965), which played around and deconstructed both science-fiction and detective films, the picaresque Pierrot le Fou (1965) and Masculin-Feminin (1966), which merged relationships and Marxism, to name but the most well-known of his films.

Weekend is fairly much the point that Jean-Luc Godard began to move away from these earlier films, which had been filled with an energetic vibrancy fuelled by his love of cinema, towards a much more politicised film. Into the 1970s and beyond, Godard became almost exclusively interested in political cinema, forming the Dziga Vertov Group, a filmmaking collective with specifically Marxist ambitions that aimed to conduct social revolution on film and give cinematic voice to disenfranchised groups.

At the same time, Godard’s work started to lose the acclaim of the arthouse intelligentsia. A number of his projects during this time – various film made for the BBC and Italian tv, an attempt to make a film on behalf of the PLO – were either not released by their distributors or fell apart. He had the odd success – the controversial Hail Mary (1984) about a modern Immaculate Conception and his gonzo adaptation of Shakespeare’s King Lear (1987) – but mostly his films have become dry political treatises that have abandoned even the masquerade of narrative and preach direct to their audience with the likes of Pravda (1968), concerning the 1968 Soviet invasion of Czechoslovakia; A Letter to Jane (1972), a filmic essay based on a single photo of Jane Fonda, and Germany Year 90 Nine Zero (1991) about the political state of post-reunified Germany.

Weekend is a film that divides people between regarding it as brilliant filmmaking or those who see it as boring and pretentious pseudo-intellectualism. Where one’s opinion falls here is largely the extent to which one holds French New Wave in high regard or not. I must admit to being on the side that regards Weekend (and most of the French New Wave) as tedious, rambling and pretentious. Godard sets Weekend up as a sort of Marxist/existentialist road movie where he takes to course no less than the decay of Western civilisation.

As Godard’s middle-class couple travel from the suburbs to countryside, society appears to be progressively falling apart all around them before erupting in armed revolution. Godard’s class war treatise certainly succeeds in occasionally disturbing – like the offhand reference at the end, where it appears that Mireille Darc has eaten her husband. There is also the famous ten-minute long tracking shot that follows Mireille Darc and Jean Yanne as they pass along what starts as a traffic jam but becomes increasingly something more apocalyptic as we see burning cars and blooded bodies in the wrecks.

On the other hand, Weekend is filled with such a rambling pretentiousness that I quickly abandon my attempts to defend it. Jean-Luc Godard has been called brilliant for creating a film that not only attacks bourgeois values with a revolutionary zeal but also launches into traditional storytelling in a similar way, throwing out narrative structure and even logical coherence in a kind of grand barricade-storming anarchism. Maybe. At the same time, the difference between a film that is boring, pretentious and incoherent and between one that is brilliantly surreal and defies traditional narrative and coherence seems to be precious little.

Godard offers five-minute lectures on Marxism and the disintegration of society spoken in English (and this is a French film with English subtitles); an encounter with a man in a telephone box that ends in both groups singing alternate lines of a song into the phone; the appearance of a messianic hitch-hiker who manifests a pig in the backseat of the car and ends up running about in a field chasing miraculously materialised sheep; various encounters with historic and fictional personages; a man who has a grand piano delivered and then plays Mozart in a barnyard; and a sequence with a cook cracking an egg over a girl’s naked body and shoving a fish up her vagina that looks like a Monty Python gag waiting to start.

For all Weekend‘s being championed as an attack on bourgeois values, it is one that oddly leaves one confused as to where Jean-Luc Godard’s own views lie. While the film makes a potent and biting attack on materialism and the consumer society, the revolutionaries by contrast are seen as even worse than the capitalists – as murderous and cannibalistic. For all Jean-Luc Godard’s embracing Marxism in the subsequent decade, Weekend is not exactly a film that makes a sympathetic plea for his cause.

If anything, what Weekend offers is not a scathing indictment of materialism but a misanthropic view of the human condition – it seems to say that civilisation only masks greed and that were the revolution to come it would only be another form of barbarism. There is considerable irony to the film’s pretensions as well – its advice for the handling of philosophers and poets is to set them on fire, yet equally it spends a lengthy amount of time doing exactly what it condemns – preaching to its audience.

Jean-Luc Godard’s other genre films are:– RoGoPaG (1962), a continental anthology film to which Godard contributed a surreal segment portraying Paris after the nuclear holocaust; Alphaville (1965), a surreal intergalactic detective story; the Anticipation segment of The Oldest Profession in the World (1967) about an alien visitor meeting a prostitute of the future; Hail Mary (1984), Godard’s controversial modern version of the Immaculate Conception; and Oh, Woe is Me (1993) in which a god may have appeared to have sex with a woman.