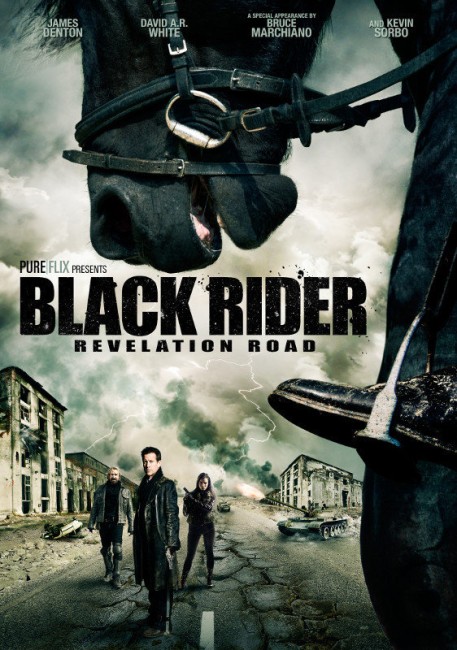 It is two years after The Rapture has occurred and society has collapsed into a series of isolated communities across an anarchic wasteland. Josh McManus roams the abandoned highways of Montana in his car. He intervenes to save Emily, a teenage girl abducted by scavengers, but she is stabbed during the chase. Trying to save her life, Josh takes her to the nearby community of Wolf Point. He is refused entry until Sofia, one of the community members, defies the guards and opens the gates to let him in. For this, Josh is sentenced to be executed but the leader Drake offers Josh his freedom if he will go out into the wastelands and find the town’s former doctor Grace, Sofia’s mother, who left to join the community of the mysterious Shepherd. Josh sets out on his journey, joined by Sofia who hides in the trunk of his car. Out in the wasteland, he must fight off the scavengers on his quest to find the Shepherd and save Emily’s life.

The first two Revelation Road films were set around The Rapture and had David A.R. White dealing with the immediate aftermath in which a percentage of the world’s population had been bodily taken up to Heaven. By the time of The Black Rider, it is now two years after the collapse of civilisation. It immediately becomes apparent that Gabriel Sabloff is wanting to make a Christian version of Mad Max 2 (1981).

The film’s Mad Max homages become more like photocopies. The world is broken up into small self-contained communities living in a desert filled with scavengers who prey off others. The hero in both films is a grim loner who fights according to his own moral code (where it must be said that playing the unshaven, tight-lipped figure with badass fighting skills is actually an improvement over the gloopy blandness of David A.R. White’s performance in the other films). He cruises the wasteland in a muscle car that is not the same model but clearly intended to evoke Max’s V8 Interceptor, where Gabriel Sabloff even copies George Miller’s shots of placing the camera down at the level of the hood and cruising along the car’s length.

On the other hand, the idea of a Christian action film causes you to do a double take. There is a great idea of the divinely inspired action hero who seems to be unable to lose a fight and has provenance working on his side as is suggested at several points, even though not much is done with this. Interestingly enough, David A.R. White seems conflicted over the whole issue of “Thou shalt not kill” and has a debate with Hilty Brown about the justifiability of self-defence at one point. On the other hand, the film comes to no particular resolution on the debate and later has action set-ups in which White is seen using guns and people being shot. It is the case of the film’s adherence to a particular genre triumphing over what should have been a much deeper moral conflict on the part of its Christian characters than that.

The Black Rider never particularly goes anywhere. David A.R. White sets out on a mission and eventually finds a commune led by the serenely aloof Robert Gossett, although his mission comes to a surprising non end with the girl he set out to save choosing to die and go to Heaven with Jesus (Bruce Marchino) and the missing mother still not located. With the last minute appearance of the mysterious duo in a Lear Jet acting on clear behalf of the Anti-Christ, not to mention a last scene cameo that features the return of Brian Bosworth from the other films, it seems that a sequel is being set up, although this has yet to come about.