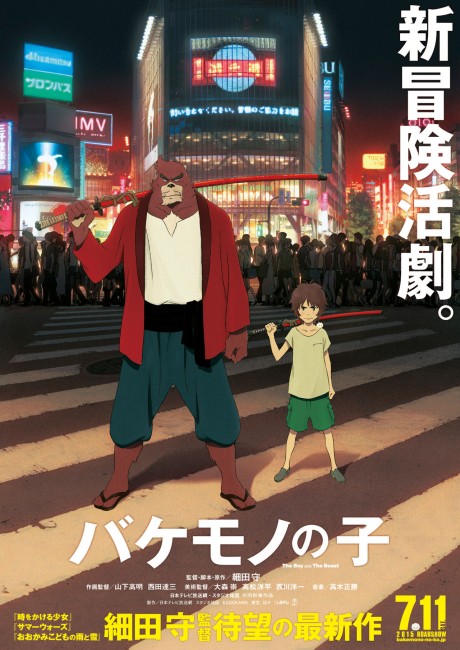 Seven year-old Ren roams abandoned and alone in the streets of Tokyo. He is spotted by a hooded figure with beast-like features who suggests that Ren follow if he wants shelter. Ren follows the figure through a warren of alleyways to find himself in the world of Jutengai, which is inhabited by beast people. He is reluctantly given a home by Kumatetsu, the creature he has followed, who renames Ren as Kyuta. The others around are shocked when Kumatetsu announces that Kyuta, a human, is going to be his apprentice. The aging master of Jutengai has announced that he will soon retire and become a god but is having difficulty deciding in what for he should reincarnate. In the meanwhile, Kumatetsu and the popular favourite Iozen vie to become the new master. After they meet in the marketplace and fight, Kyuta stands up to cheer the downed Kumatetsu on because nobody else is, in doing so helping him recover. They then begin training, Kyuta discovering Kumatetsu’s weaknesses by shadowing and mimicking his moves and slowly learning how to fight himself. Now aged seventeen, Kyuta wanders back into the human world where he is taken by Kaede, a girl he meets in the library who teaches him to read, urges him to study and finally go and meet his father again. Kyuta and Kumatetsu then argue over Kyuta’s spending so much time in the real world and Kyuta decides to leave Jutengai, only for Kumatetsu to slide back into his old ways just as his big showdown with Iozen is about to take place.

Mamoru Hosoda has emerged in recent years to the forefront of Japanese anime directors. Hosoda first appeared on cinema screens with works adapted from tv series such as Digimon: The Movie (2000) and One Piece: Baron Omatsuri and the Secret Island (2005). However, it was with The Girl Who Leapt Through Time (2006) that his name began to attract attention and this peaked with the excellent Summer Wars (2009) and Wolf Children (2012).

The Boy and the Beast is set in one of the parallel worlds that anime seems to love – a magical place hidden beneath or in the corners of this world and filled with a rich menagerie of strange and wondrous creatures. This has become an anime staple ever since the huge hits of Hayao Miyazaki’s My Neighbor Totoro (1988) and Spirited Away (2001). See also the likes of Pom Poko (1994), The Cat Returns (2002), Oblivion Island: Haruka and the Magic Mirror (2009), Children Who Chase Lost Voices from the Deep (2011) and A Letter to Momo (2011).

The story that Mamoru Hosoda throws into the mix is an appealing variant on the prickly sensei and his pupil theme that has worked through The Empire Strikes Back (1980), The Karate Kid (1984) and countless martial arts films. Hosoda’s variation is to turn this into a grudgingly caring and supportive relationship between two mutually stubborn personalities – sort of like Mowgli and a much grumpier version of Balaoo from The Jungle Book (1967). This starts well and the film has a lot of fun progressing through the standard training montages. The main complaint I would make is that the world we are in seems a little sketchy and taken for granted – other than a strange bestiary of creatures and the occasional rule about how peace is maintained, we get very little about it that sets it aside from the other worlds listed above.

In mid-film, The Boy and the Beast does a strange tonal shift where it goes from the comically amusing sensei/pupil film to abruptly take the story away from Jutengai and back into the real world. At this point, it starts to slow down and become a teenage romance of sorts – one that peculiarly pushes the importance of education to the forefront. It is also Mamoru Hosoda venturing back into the theme of the boy divided between two selves – human and beast – that we saw in Wolf Children.

It all starts to come together nicely at the end, even if you feel that Hosoda rushes to a big dramatic denouement the film didn’t need – a typical mass destruction and epically-scaled climax because that’s what anime does – not to mention creates a villain figure who only emerges out of left field in the last twenty minutes. It is not a film that soars with the same huge emotional rewards that both Summer Wars and Wolf Children did but suffices rather enjoyably.