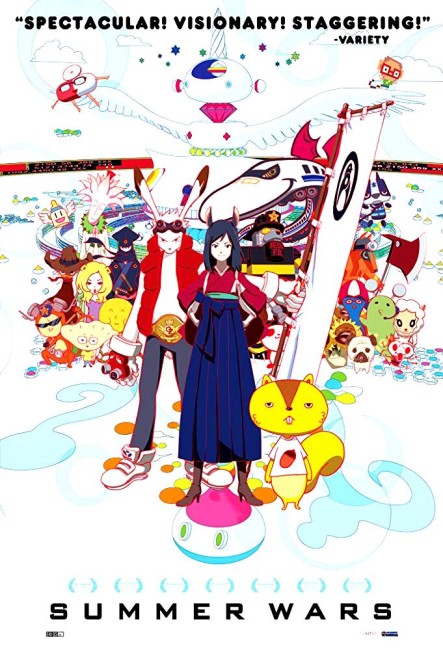 The social networking site OZ where everyone interacts via avatars has become one of the most popular websites in the world with some businesses even moving their centre of operations into OZ. High school student Kenji Koiso is asked by his classmate Natsuki Shinohara to accompany her to a family get-together and jumps at the chance because he has a crush on her. When they get there, Kenji finds that it is the occasion of Natsuki’s grandmother Sakae Jinnouchi’s 90th birthday and that Natsuki is passing him off as her fiancee. Kenji bluffs his way through and is welcomed among the extended Jinnouchi clan. Kenji is also a maths genius. He receives a piece of code by anonymous text message, which he easily cracks. The next morning he finds that this piece of code has been used to hack into and bring down OZ and that he is listed as a wanted fugitive. Arrested, he protests his innocence. He is released as it becomes apparent that OZ has been taken over by the rogue artificial intelligence known as Love Machine and that Love Machine is now using OZ to wreak havoc on emergency and control systems all across Japan. As Love Machine’s malicious attacks begin to have fatal consequence, Kenji and the Jinnouchi clan realise that the only means to stop it is to enter OZ and defeat it in combat.

Mamoru Hosoda is a rising name in Japanese anime. Hosoda appeared as a director on the tv series Digimon: Digital Monsters (1999-2003) and co-directed the film spinoff Digimon: The Movie (2000). Hosoda subsequently went onto make the film One Piece: Baron Omatsuri and the Secret Island (2005), spun off from another anime series, and was set to direct Howl’s Moving Castle (2004) before being replaced by Hayao Miyazaki. More recently, Hosoda had a reasonable hit with the anime version of The Girl Who Leapt Through Time (2006). Summer Wars shows Mamoru Hosoda finally reaching full strength and delivering an exceptional work that leaves him as potentially one of the next big names in anime. He subsequently went onto make the likes of Wolf Children (2012), The Boy and the Beast (2015) and Mirai (2018).

It becomes apparent that OZ is intended as some combination of Second Life and Facebook, as designed via the Superflat artwork of Japanese artist Takashi Murakami. The film immediately plunges us into OZ, where the play of primary colours, shapes and wealth of detail overwhelm with the visual splendour of the world that Hosoda and his animators have created. The array of bizarre avatars proves bewildering to the point of information overload in terms of the density of visual detail. There are some stunning action sequences during the various battles that take place in OZ.

There is a certain tendency to regard the virtual world as merely an extension of the usual goings-on in anime – the climactic battles with Love Machine in particular reflect this where it seems defeating a hostile program is something that has to be conducted by battering it with more and more force in combat; where individual avatars/profiles in a social network are treated as souls than can be bartered in a card game (one just kept asking why avatars were so all-important and what would stop people simply creating new ones). However, one suspects that the OZ and Love Machine aspects are only there to sell Summer Wars to a certain anime demographic that eats up all the epic-sized mass destruction and where Mamoru Hosoda’s real interest lies in telling a real-world story about a large extended family.

All of the hyper-real candy-apple colouration and visual information overload comes in direct contrasted to the real world scenes, which are shown in earthy, naturalistic and rundown tones. There is a wonderfully simple and contemplative beauty that comes in the countryside scenes – something also to be found in the anime of Hayao Miyazaki (who constantly seems to be an influence on Hosoda’s style) – casual shots watching a grasshopper balanced on the end of a frond, a bud blooming, the line of sunrise moving down a hillside.

There is an enormous energy and bubbly vitality to the scenes where the extended Jinnouchi clan arrive for the birthday party preparations. Here Hosoda manages to engender a wonderfully sincere emotion – there is something incredibly touching to the scene where Kenji is arrested and confesses to the grandmother in front of the gathered clan before he goes that it meant something for him to be there. There is a beautiful tenderness to the scenes where they are grieving for the death of the grandmother and Kenji and Natsuki sit on the porch and she says simply “I can’t stop the tears” and he reaches out his hand to touch hers.

Each member of the sizeable clan comes with their own individuality and there is a depth and honesty to the interactions, like the scene where the grandmother challenges Kenji to the game of hanufada, telling him if he loses that he must take care of Natsuki. The grandmother is one of the most warmly rounded characters to come this way in animation in some time – her combination of wisdom – requesting in her will that her funeral reflect that “the worst things in the world are to be hungry and alone” – and formidable determination – the marvellous scene where she decides that something must be done about the crisis and gets on the phone and uses her connections to bring everybody together. There are few films that hold such a portrait of family togetherness as this does.