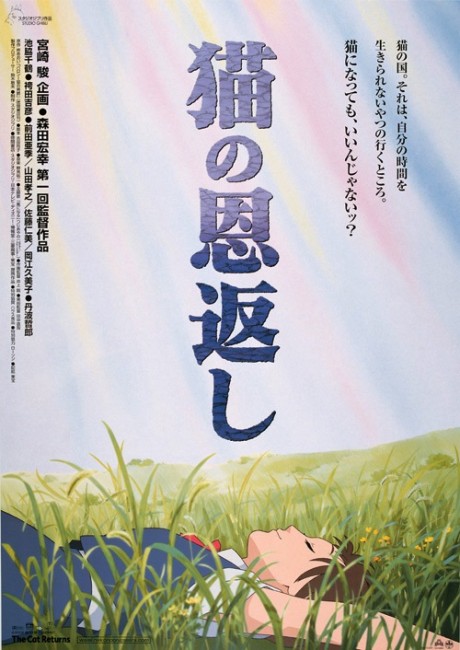 Schoolgirl Haru Yoshioka runs out into the street to save a cat from the path of an oncoming truck. She is startled when the cat then stands up and thanks her. That night she receives a visit from the King of Cats who informs her that the cat she saved was his son Prince Lune and that she has the gratitude of the entire cat kingdom. The next day, Haru finds herself inundated by gifts of catnip and mice from cats everywhere. Trying to put a stop to this, she then learns that the King has decided she is going to marry Lune. As she despairs about what to do, a mysterious voice tells her to go to the Cat Business Office by following a large white cat. She does and enters another dimension where she meets the cat Baron Humbert von Gikkingen who decides to come to her aid, along with his servant, the fat white cat Muta. She is then abducted by the King’s cats and taken to the cat realm in preparation for the wedding. Once there she finds that she is now changing into a cat and that she is doomed to remain one if she does not escape by dawn.

The Cat Returns is an anime from Studio Ghibli, the production company founded by Hayao Miyazaki, the animation director best known for epics like Princess Mononoke (1997) and Spirited Away (2001). Miyazaki only executive produces this time out and instead hands direction over to Hiroyuki Morita, a newcomer who had formerly worked as an animator on various other Ghibli features.

The Cat Returns is actually a loose sequel to an earlier Ghibli production Whisper of the Heart (1995), a film that was largely a teenage romance and much more realistic in style, from which the characters of the Baron and the fat cat Muta make a reappearance (hence the title ‘the cat returns’). Although in the non-fantastic original, Muta was merely a cat and the Baron a statuette in an antique shop who came to life in a few brief scenes in a story that the heroine decided to write.

The Cat Returns received a surprisingly negative response from a number of anime fans. Largely the problem seems to be that people were expecting another Princess Mononoke or Spirited Away from the Ghibli/Miyazaki name attached. While the film does not scale the sublime heights that Hayao Miyazaki did with either, it is delightful and perfectly charming in its own right. The problem is more, one suspects, a case of Miyazaki having raised the bar of people’s expectations so high that anything slightly less comes as a disappointment.

Certainly, there are many familiar elements of Hayao Miyazaki’s films here. The girl’s venture into the otherworld filled with bizarre talking animals has many similarities to Spirited Away and My Neighbor Tortoro (1988), while the chase sequences through the maze and up the tower that climax the film are reminiscent of the nutty slapstick dementia of Miyazaki’s The Castle of Cagliostro (1980). The film also returns to the shoujo anime style that Miyazaki has ventured into upon a number of occasions.

Hiroyuki Morita’s strength is in the characters and in a perfectly naturalistic sense of humour. There is a charm to the heroine’s plight – finding herself pursued by hordes of cats, with perfectly wrapped gifts of mice appearing in her locker and her horror at discovering she is about to be married to the cat prince. Morita gets marvellous play out of the characters in the background, especially the grumpily overweight Muta and his constant being sidetracked by food and fights with the raven Toto.

The scenes in the otherworld realm are appealing. Maybe Morita doesn’t craft his otherworld with the painterly contemplative beauty that Miyazaki does in Spirited Away but there is a lot of fun to be had in the slapstick chases through the maze, the bizarre antics of the performers at the wedding banquet and the heroine’s increasingly perplexed problem at finding herself turning into a cat and being served up platters of raw fish.