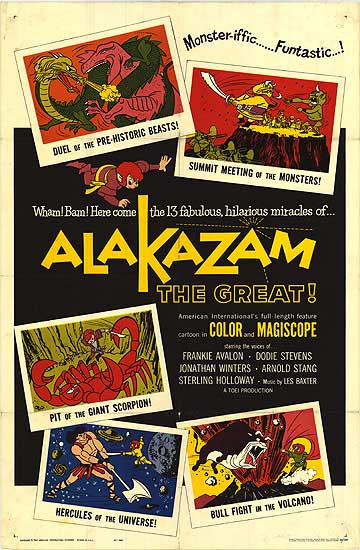 The mischievous monkey Alakazam become the king of Majutsoland after winning a bet. In his arrogance, he forces Merlin, the world’s greatest magician, to teach him all there is about magic. Thus empowered, he goes and steals from the gods themselves. Angered, Amo, king of the gods, strips Alakazam of his powers and imprisons him inside a mountain to learn humility. Faced with the death of his beloved Dee-Dee, Alakazam pleads with the gods for her life and so is given a chance to earn her redemption by going on a pilgrimage with Amo’s son.

It is hard to see where Alakazam the Great attained the reputation that had itself listed by the Medved Brothers as one of the The Fifty Worst Movies of All Time (1977). Alakazam the Great was originally made in Japan by the legendary Osamu Tezuka. However, it was imported and dubbed by American International Pictures for English language release using a number of voice talents of the era, in particular pop stars Franke Avalon and Dodie Stevens and comedian Jonathan Winters.

The film a sentimental and mawkish in places – but if that is a crime then most Disney product is infinitely more guilty of. There are some rather sickly songs and the dubbing is not very good (an original restored version with subtitles is probably long overdue). On the plus side, the film comes with a sly sense of humour that makes it quite endearing. Certainly, few cartoons move with such fast-paced action. The film’s rare availability on video and existence as an internet bootleg has began to see it reevaluated as a lost early anime classic in recent years (although the Chinese animated version of the same classic story – see below – is by far the better film).

Alakazam the Great was one of the handful of films directed by Osamu Tezuka, the cult creator of numerous manga (and the person credited with the distinctive manga/anime look), the most famous of which was Kimba the White Lion (1965-6) and Astro Boy (1963-6).