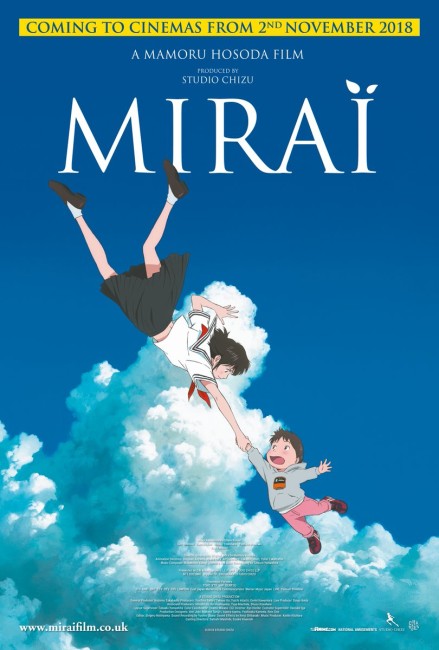 Four-year-old Kun is upset when his parents return home with a new baby girl that they name Mirai. Kun is distressed to find that this suddenly means that less attention is given to him. He responds with tantrums and defiant behaviour, while deciding that he hates Mirai. The garden of the house transforms and there Kun meets everyone from the teenage Mirai of the future to the family dog Yukko in human form and travels into the past to meet his mother as a child and his grandfather, who proceed to show him life through their eyes.

In recent years, Mamoru Hosoda has emerged at the forefront of Japanese anime directors. Hosoda first appeared on cinema screens with works adapted from tv series such as Digimon: The Movie (2000) and One Piece: Baron Omatsuri and the Secret Island (2005). His name began to attract attention with The Girl Who Leapt Through Time (2006) and peaked with the likes of Summer Wars (2009), Wolf Children (2012) and The Boy and the Beast (2015). Mirai received a great deal of critical acclaim, including being nominated for Best Animated Film at the Academy Awards, although lost out to Spider-Man: Into the Spider-Verse (2018).

Hosoda was inspired by his three-year-old son and seeing the jealous ways that he acted when Hosoda and his wife had a baby daughter (who was also named Mirai). It’s a very baby and child-centric film. I am not a parent so a good deal of the focus in the early scenes, which consists of Kun adjusting to the new arrival in the house and his acting out didn’t do much for me.

On the other hand, I could appreciate the cuteness appeal. Clearly, Hosoda and his animation crew have sat observing children in real life to create their montage of scenes with Kun (Hosoda apparently brought his kids into the studio for the animators to model). I suspect though that the people who praised ‘Mirai so highly and pushed it at the awards were audiences for whom the baby-centric theme resonated.

The most fun to be had in the film is during the sequence where the teenage Mirai with the aid of Yukko the dog urges Kun to put away the ritual dolls – every day they stay out after the ceremony is over means that it will be longer that Mirai remains unmarried (according to local superstition). What ensues is a rather funny caper scene where Kun and the others sneak into the living room while the absent-minded father is working at the dining table and unnoticed by him contrive to pack the dolls away (all in the right order the ritual requires) and try not to be noticed – only for things to go wrong.

There is some fun to be had with the various companions that Kun meets, especially the feisty Mirai and what we realise is the family dog Yukko. The scenes where Kun seemingly travels through time to meet his mother when she was his age or his grandfather take on a more sentimental tone.

The oddest of these sequences is one where Kun travels into the future where Tokyo Central train station has become a vast network and he is greeted by a robotic ticketmaster at the help kiosk. There is no particular explanation of the agency involved in this – whether it is all something in his imagination or some magical process has caused him to travel through time. There is a nice, genteel story arc that plays throughout about how each of these characters allows the child to grow up a little more in his own way.