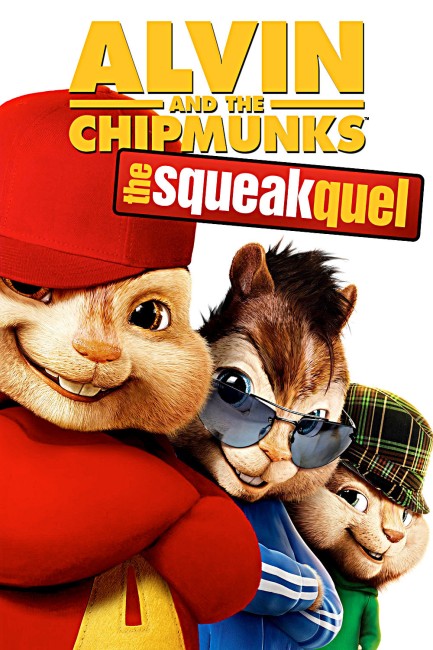 Alvin and the Chipmunks are at a concert in Paris when a stunt performed by Alvin hospitalises Dave. Dave sends the Chipmunks back to L.A. in the care of his Aunt Jackie. However, the Chipmunks are not even out of the airport when they cause her too to be hospitalised. That leaves them in the care of her layabout nephew Toby who is only interested in playing videogames. On Dave’s instructions, the Chipmunks are signed into West Eastman high school. They soon find this a difficult environment as the jock Ryan determines to annihilate them because they are stealing away his popularity with the girls. Meanwhile, Ian Hawke encounters The Chipettes, three female chipmunks who have come to see Alvin and the others. When he discovers they can sing, Ian realises that this is his ticket back to the big time and grooms them as a rival musical act. The principal persuades The Chipmunks to enter an inter-school music competition to win the money shortfall the school needs. Ian then sets out to enter The Chipettes into the competition instead, demanding a playoff between the two groups. Meanwhile, Ryan has wooed Alvin away to join the football team. As the time of the deciding performance nears, Simon and Theodore face a split in the Chipmunks.

I hated the Alvin and the Chipmunks movie. It was one of those cinematic experiences where you come out feeling that you would happily gnaw off body parts if only you could reclaim that hour-and-a-half of your life. It was one of the most soulless and cynical pieces of marketing in some time – a film conceived around a brand name from the past, everything pitched down at the level of poop and vulgarity jokes, and the Chipmunks constantly making smartass and pop-culture gags. Not to mention it all being conducted in those irritatingly squeaky helium voices. And then of course there was the cynicism of a film conducting a moral message about the characters being exploited when the entire Chipmunks phenomenon had been conceived as a marketing gimmick since 1959.

For the sequel, the producers have found a replacement director in Betty Thomas. One supposes if you want to find a director perfectly suited to the sensibilities of an Alvin and the Chipmunks film then Betty Thomas should be at the top of your list. A former actress, best known as a regular on tv’s Hill Street Blues (1981-7), Thomas made her feature debut with The Brady Bunch Movie (1995) and then went onto the remake of Dr Dolittle (1998), which became the model for this type of live-action talking animals film in taking a classic series of stories and subjecting them to infantile fart and poop gags. Everywhere else, Betty Thomas’s directorial record has been based on aiming for the lowest common denominator – Private Parts (1997) about the life story of Howard Stern; 28 Days (2000), which turned the AA process into a Sandra Bullock romcom; the staggeringly unfunny remake of the tv series I Spy (2002); and the high school comedy John Tucker Must Die (2006). Thomas seems the perfect anti-intellectual filmmaker – she is someone whose work makes an automatic beeline for the witless and vulgar.

It is through grated teeth and with firm dedication to the cause of completism that I force myself into the theatre to watch a second round of Alvin and the Chipmunks in live-action. Even the subtitle The Squeakquel has the mental feel of fingernails grating on a blackboard when you read it for the first time. You get a sinking feeling from the first few minutes of the film where Jason Lee, the human star of the original is conveniently sidelined in another country, where clearly Lee, who is otherwise a fine comedy actor, was gritting his teeth about the prospect of returning and had been offered a good deal of money just to make a token appearance.

The annoying David Cross, who loudly proclaimed everywhere that he only made the first film for the money, is back and placed in centre stage where he relishes the opportunity to be as obnoxious as possible. The new star of the show gets to be Zachary Levi, the star of tv’s spy comedy Chuck (2007-12) who affects a gormless range of expressions as if he didn’t have many clues what he was supposed to be doing.

I am perturbed to report that I did not find Alvin and the Chipmunks: The Squeakquel as bad as I was expecting to. It is less intrusively annoying than the first film, contains less in the way of obnoxious vulgarity and manic pop culture gags. It also feels like it has more to it as a story than the first one. Mindedly, that is a question akin to asking whether one prefers big or small turds – a turd is still a turd no matter what and all the things I hated about the first film are still present in about equal amounts.

The principal new idea this time around has been to introduce the characters of the Chipettes, the trio of female Chipmunks that were introduced on the animated series in 1983 after appearing as backup singers on several Chipmunks records. The plot for The Squeakquel is blatantly an attempt to jump aboard the bandwagon of the High School Musical (2006) phenomenon, not to mention American Idol (2002– ) mania. Thus the premise is altered in order to slot them into a high school setting ie. though having massive worldwide popularity as recording/performing artists, the storyline now mandates that they take a few steps backwards and be made to go to high school. Like High School Musical, the big dramatic hook the film builds to is one where the Chipmunks and Chipettes have to face off in a live musical competition.

The subplots throughout are all cliches borrowed from the high school movie genre – the humiliations by bullying jocks and the eventual comeuppance of the underdog(s); the character subverted by newfound popularity before realising that this means he has abandoned his friends. About the only cliche we do not get is where the hero has to choose between the bitchy, popular girl he desires and the sweet girl-next-door type he never thought of as anything more than a friend.

Betty Thomas directs in inane slapstick sequences. The film is filled with sequences with the Chipmunks causing Jason Lee to be compacted in an automatic hospital bed, they going berserk through the school halls, meeting Aunt Jackie at the airport and causing her to be hospitalised. As always, Betty Thomas aims for Lowest Common Denominator jokes – there is a sequence with Theodore waking from a bad dream and getting into bed with Zachary Levi before inevitably being driven away by a long drawn-out fart.

The dubious highlight of the film is a sequence involving a rescue of the Chipettes from a stretch limo by a toy motorcycle and remote-controlled model helicopter. That the punchline of the sequence involves David Cross getting a twelve-inch model motorcycle rammed into his testicles gives a fair idea of where the film is coming from. There are numerous pop culture jokes, with lines referring to the likes of Taxi Driver (1976), Apocalypse Now (1979) and The Silence of the Lambs (1991) – not exactly films you would expect the film’s target moppet audience to be familiar with.