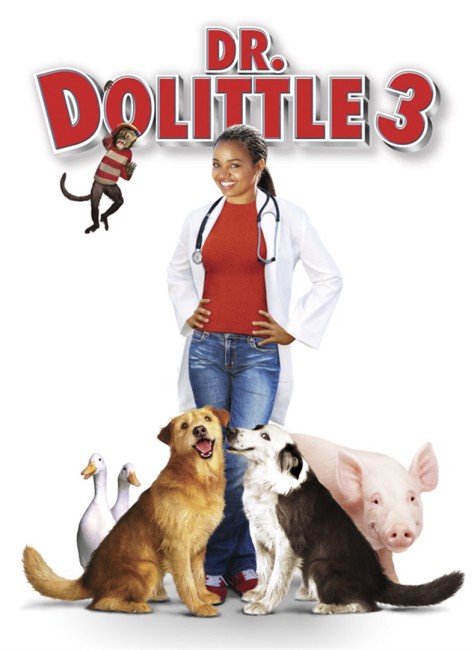 Dr Dolittle’s seventeen year-old daughter Maya has inherited her father’s ability to speak to animals. However, she believes that this is causing her to be regarded as geeky by the other students at school. After Maya sneaks out of home to attend a party, her mother decides to send her away on a summer program at the Durango Ranch. Ashamed of her abilities, Maya hides who she is by giving a different surname. At the ranch, she and the bitchy Brooklyn end up competing for the attentions of the owner’s hunky son Bo. Maya then discovers that the ranch is about to be foreclosed. She persuades the rest of the kids to come together and use their talents to enter the local rodeo and win the prize money to save Durango. However, Maya realises that to win the competition she must stand up to accept her own abilities.

This is the third of the films that began with the cinematically released Dr Dolittle (1998) starring Eddie Murphy. This was followed by Dr. Dolittle 2 (2001), also with Eddie Murphy and also released to theatres. Though shot for a theatrical release, Dr. Dolittle 3 was only released to dvd. By this point, Eddie Murphy is no longer present and the only actors from the previous films are Kyla Pratt who played his youngest daughter and Kristen Wilson who played his wife. (Phil Proctor also repeats his voice role as the drunk monkey that he took over in the previous film). Two more films, Dr Dolittle: Tail to the Chief (2008) and Dr Dolittle: Million Dollar Mutts (2009), also featuring Kyle Pratt (but not Kirsten Wilson), were subsequently released. (It should be noted with Eddie Murphy absent, the title is inaccurate as the film series no longer features anybody with the honorific Dr Dolittle).

What was annoying in the previous Dr. Dolittle films has become utterly excruciating by the point of Dr. Dolittle 3. A moronic level of humour has been allowed to run riot. In particular, the film gets taken over by talking animals making smartass lines: “The hawk has left the building”, “Don’t hate the player, girl. Hate the game” or “You got served.” A snake weaves before a victim, asking “You want to dance with the devil in the pale moonlight?” in a Mexican accent. The kids engage in an egg fight in the henhouse while Lucky sits on the sideline going “Give me a ten spot on the tough one.” The monkey is seen enjoying a rectal exam, while the aging rooster is even seen with a calendar of chicken pin-up girls at one point (keeping in mind that Dr. Dolittle 3 is meant to be a family film).

In one of the most inane scenes, Kyla Pratt sneaks away to a party and is followed by the monkey who starts throwing things at her from a tree where her attempts to shoo it away are taken as being dance steps that are copied by all the other partygoers. It is hard to describe how lame this sequence is. If the previous films had caused Hugh Lofting, who wrote the original Dr Dolittle stories in the 1920s and 30s, to start turning in his grave, then Dr. Dolittle 3 would surely accelerate his remains to something near the speed of light.

Beneath all the annoying humour, the cliches fly quickly and heavily. There is the bitchy rival ranch of more highly skilled hands who are pitted against the underdog heroes in competition; the underdogs have to come together to risk all in a big contest to save the ranch from foreclosure; the rivalry between the plaintive heroine and a good-looking uber-bitch for the attentions of the good-hearted hunk of the show; the champion who has lost his mojo and needs to be coaxed to come back into the ring one more time; and the heroine who just needs to have faith in her abilities in order to save the day. Once we get to the main competition, the film compounds its annoying humour (which is at least put on a backburner) by becoming dreadfully sentimental.

At least the other Dr Dolittle films had the enormously talented Eddie Murphy driving them; all that Dr. Dolittle 3 has is twenty-year old Kyla Pratt who just seems too pouty and introvertedly neurotic to carry a film all on her own.

There does seems some odd cultural mix-ups going on when the film tries to throw together an urban African-American kid into a ranch setting. Black rancher John Amos even has a speech at one point talking about Manifest Destiny, which would be par-for-the-course did it not come from a Black man, one of the cultures of the time that were explicitly exploited by the whole move westwards. The film also tries to mix urban hip-hop culture up with Country and Western in a bizarre miscegenation where Kyla Pratt for no particular reason gets up to sing a hip-hop number in a Country and Western bar, announcing to the audience that it is in her own style that she calls “hick hop”.