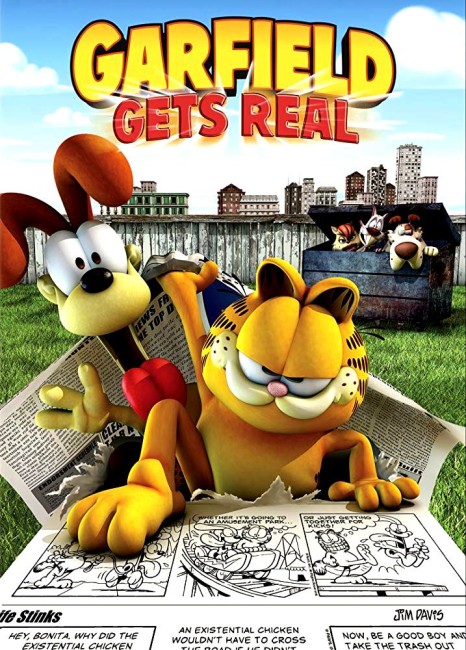 Garfield feels bored with his life at Comic Studio where he poses for the shots that are then turned into panels of the comic-strip he appears in. While they are in the projection room watching people reading the strips in the newspapers, Odie tears his way through a gap in the screen and escapes into the real world. Seeing all the hot dogs available there, Garfield eagerly follows. The two enjoy life in the real world. However, they then learn that with them absent the comic-strip is to be cancelled unless they can find a way to get back home.

Garfield Gets Real was the third film based on the popular syndicated comic-strip Garfield about a lazy sarcastic cat. There had been a number of Garfield animated tv specials but the film series began with the live-action Garfield (2004), which led to a sequel Garfield: A Tale of Two Kitties (2006). Neither of these were well-received generally or by Garfield fans. Garfield Gets Real was a planned third Garfield film, although, unlike the other two films, it is animated. Though this film was originally made for theatrical release and even intended to be released as a 3D film, it ended up going to dvd in most territories. None of the personnel behind the other live-action films are involved, although the comic-strip’s creator Jim Davis does write the script and co-produce.

Certainly, with Jim Davis involved, Garfield Gets Real comes closer to the look of the comic-strip than either of the live-action films. Garfield is also thankfully freed of the smartass one-liners that he gained in the films, although is far mellower than the lazily sarcastic character that we get in the comic-strip. Worse though, Garfield gets shamefully sentimental: “Reality is where your heart is,” he says at one point. “And my heart is with the comics, you guys.”

The animation comes in a uniquely vivid visual style. The most impressive part of the film is the opening sequence where the sun rises across the town and everything comes to incredibly vibrant life as the light touches it, resulting in an entire town of bouncing buildings and vehicles, all shown in mind-boggling detail.

The basic premise has been taken from films such as The Purple Rose of Cairo (1985) and Last Action Hero (1993), which centred around the idea that the cinematic world was a separate reality in a different dimension from the ‘real world’. There were also efforts like The Adventures of Rocky and Bullwinkle (2000) and Fat Albert (2004) where characters from familiar animated tv series push through the envelope that allows them to enter the ‘real’ ie. live-action world. Here Garfield lives in a highly stylised cartoon world – one where superheroes fly through the sky, pianos dance in the streets, dustbins are animate and the animals and the humans converse. The film even gets cameos from other syndicated newspaper comic-strip characters such as Dagwood from Blondie and Grimm from Mother Goose and Grimm and it is left for us to assume that this is the world where all comic-book characters exist.

The main problem with Garfield Gets Real is this very concept. The notion that the world where Garfield lives is one where comic-strip characters are filmed and then the shots screen-printed and turned into the strip’s panels is an awkward one that fails to pass even five seconds plausibility. The biggest problem though is that there seems little difference between Garfield’s world and the real one. By contrast, The Purple Rose of Cairo, Last Action Hero, Fat Albert et al draw much comic disparity between the fictional and real worlds with characters from one coming up against reality checks in the other. Here however both worlds are equally stylised and there is little difference between either – the animation style between either does not change, while animals can talk in both worlds.

Moreover, the film climaxes on an unreal series of action stunts with Garfield and companions racing around a burning hotel in a hopper cart and Garfield conducting a rescue via chandelier that more appropriately belongs in the unreal world of cartoon physics. There is not even any scene where Garfield realises that the real world is different to the one he comes from – instead, Jim Davis drives the story along with lazy plot devices like Garfield missing his home and the contrived suspense-sustainer of the need to get back before the comic-strip is cancelled. One suspects the original intent was that the animated world was portrayed flat and the real world would have been seen in 3D – but being released flat, this only leaves one with the impression that Davis failed to put much effort into thinking about the basic concept.