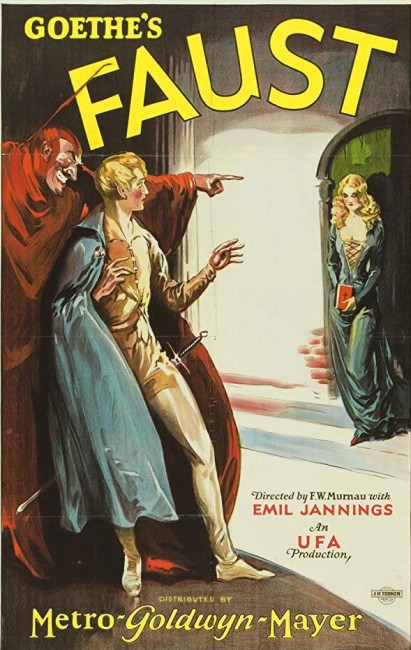 Angels try to stop The Devil as he races across the Earth. The Devil insists that the Earth is his and strikes a bet with the angels as to whether he can corrupt the aged scholar Faust. Appearing in the guise of the lecherous Mephisto, The Devil infects a town with the plague. Faust struggles long to find a cure. Mephisto tempts him with the power to heal the dying. Next Mephisto offers Faust youth, the riches of the world and the love of the innocent Margarethe, all in return for Faust agreeing to be is forever.

German cinema between the two World Wars was one of the greatest of all periods of fantastic cinema. It was a period that produced everything from The Cabinet of Dr Caligari (1919) to Nosferatu (1922), the lost The Golem (1914) and its prequel The Golem (1920) and Fritz Lang’s Dr Mabuse, The Gambler (1922), Siegfried (1924) and Metropolis (1927) to name but the most famous.

Faust was directed by Friedrich Wilhelm Murnau who is possibly one of the greatest directors of the silent era, having made the likes of Nosferatu, The Last Laugh (1924) and Sunrise: A Song of Two Humans (1927). F.W. Murnau’s name came into notice in recent years after being played by John Malkovich in Shadow of the Vampire (2000) in a thoroughly libelous portrait.

Faust is one of the most fabulous pieces of pure cinema to come out of the German silent era. Many of the films of this period delved deep into Teutonic mythology – Faust takes the Mediaeval worldview literally and crafts it into a series of extraordinary cinematic images. This is evident from the opening scene in which The Devil and The Four Horsemen race across the Earth only to be met by an angel wielding a sword of light. The film is filled with images that have an extraordinary visual potency – of The Devil standing covering the town in his giant black shadow as he infects it with the plague. The summoning of Mephisto is a great set-piece – replete with flaming circles of protection, clouds racing across the Moon, storms and winds that try to drive Faust from his place, and the appearance of the Four Horsemen amid lightning and fireballs – a sequence that cries out for a widescreen treatment and better visual effects.

In another great piece, Mephisto takes Faust on a journey around the world across landscapes and up into the clouds that flock with flights of demons, to the final appearance at the wedding of the Duchess of Parma in a flamboyant display of trickery. It is only during the latter half that the film slows down and becomes involved in the weepy melodrama of Faust and Margarethe’s romance.

F.W. Murnau goes against the grain and makes Emil Jannings’s Mephisto more of a comic than a diabolic figure. During his initial appearance to Faust, Emil Jannings makes for an interestingly brutish, almost slaveringly lascivious Mephisto. During the bulk of his appearances in black and in a cap with a two-foot long feather, Jannings’ comic moments – the expression of distaste on his face as he beholds a statue of the Virgin, or the pain as he jams his hands into his ears to block out the sound of a church organ – are a joy to behold. One of Murnau’s more indulgent parts is the lowbrow slapstick romp where Faust and Margarethe frolic in the garden while Mephisto seduces Margarethe’s aunt in the kitchen, a sequence underscored with Mephisto’s comically evident distaste at having to deal with the woman’s obviousness.

The latter half builds to a wonderfully melodramatic climax that comes straight from a Gothic novel – the heroine’s hair turns white; she is left unwed with child and is rejected as she travels from house to house through the town and finally driven out into the snow, throwing herself at what she thinks is her mother’s ghost; her cry – demonstrated by her face flying across the landscape – being heard in Hell by Faust; and of course Faust throwing himself on the pyre and the two lovers being reunited in death where their love proves enough to overcome Mephisto’s evil. This melodramatic theme of a love as a force, greater even than death, is a common one that runs through many films of the German silent era.