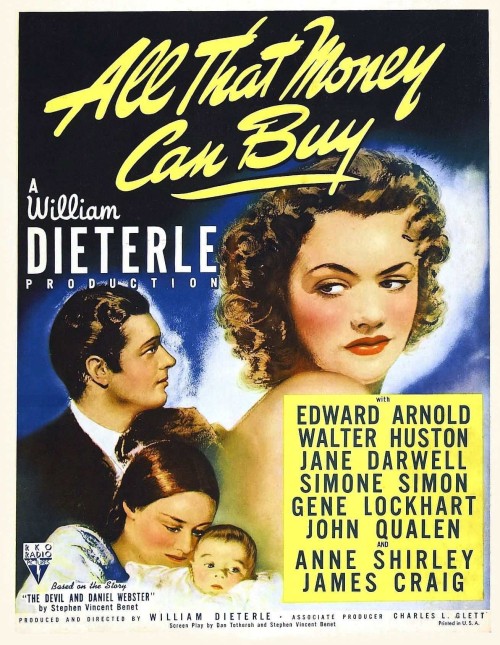 aka The Devil and Daniel Webster; Here is a Man

1840 in the town of Cross Corners, New Hampshire. The farmer Jabez Stone is down on his luck. The local moneylender is threatening to foreclose on his farm. Jabez’s wife then becomes ill and Jabez spills the last of the grain. Jabez idly says that he would sell his soul to The Devil for just two cents. Mr Scratch then appears, causing a fortune in gold coins to materialise. Mr Scratch offers Jabez a contract for seven years’ good luck in return for his soul and Jabez eagerly signs. With the gold coins, Jabez is able to help the other farmers in the area. Scratch then causes the other farmers’ crops to be blighted. They are forced to work for Jabez but he imposes loan conditions that are tougher than the ones he originally suffered. Jabez becomes callous towards his wife and takes a mistress after Scratch causes the seductive Belle to appear. As the seven years ends and Scratch comes to collect on the contract, Jabez starts to realise the consequences of what he has done. He begs the famous lawyer Daniel Webster to defend him. However, Scratch calls the worst criminals in American history to be the jurors.

All That Money Can Buy is based on The Devil and Daniel Webster (1937), a short story by Stephen Vincent Benet that has gained a classic status and been oft reprinted. Daniel Webster (1782-1852) was an actual historical figure – a celebrated 19th Century lawyer who became a US Senator and then the Secretary of State under three different Presidents during the 1840s and 50s. All That Money Can Buy was made in an era where lawyers like Clarence Darrow had attained national celebrity and the lawyer was seen as an heroic figure of legendary oratorical power – certainly, with the morally disreputable position in society that modern lawyers have attained, it is hard to imagine that All That Money Can Buy could ever have the same impact were it made today.

All That Money Can Buy is a film that is determined to make a big moral message about greed, poverty and the greatness of the American nation. It makes its points in ways that are often highly sentimentalised. Director William Dieterle throws in touches that would be maudlin cliches today but were still fresh and had an enormously resonant effect at a time when the film was made – heavenly lights coming down from the sky, luxuriant crops of wheat growing in the field, calves suckling from cows, weather vanes turning in the breeze above the barn.

Characters come as stylised caricatures – the pinch-faced miser counting gold coins; Simone Simon oozing seductivity from every pore; and a fine performance from Jane Darwell as the character of the shrewd mother, speaking wisely caution and folksy wisdom. Sharp symbolic contrast is made between Jabez’s wife and mother wearing severe bonnets as they sit in church and Jabez gambling and drinking with his friends at home as Simone Simon lies seductively draped over his shoulders. Deep at heart, this feels like a film that would not have been out of place with the Puritan Fathers.

The images of poverty throughout are ones clearly drawn from the then recent The Great Depression (1929-36), more than they have anything to do with the historical era of the USA in 1840 – farmers face bankruptcy and being driven off their land, an issue that struck a big chord during The Depression. In fact, All That Money Can Buy seems more of a Frank Capra film than it is ever one of the Light Fantasy films of the 1940s – Here Comes Mr Jordan (1941), A Guy Named Joe (1943), The Ghost and Mrs Muir (1947) etc. Like a classic Capra work, the film creates an allegorical tale of the corruption of ordinary folk struggling against economic downtroddeness and holds faith in home and hearth, not to mention a steadfast belief in the stars and stripes.

Indeed, the film alters the original short story, which is largely concerned with Jabez’s deal with The Devil and subsequent court case. In the film, the emphasis of the story has been placed on the Depression era issues of materialism vs moral virtue and about Jabez surrendering to greed after making the deal with Scratch (an issue that does not feature in the short story). It is not, for instance, until we are 90 minutes into the film’s 106-minute running time that we even get to the courtroom. The new emphasis is surely evident in the changing of the film’s title from that of the short story, The Devil and Daniel Webster, to that of All That Money Can Buy, which comes with underlying suggestion of prosperity and greed.

Like the infamous Gabriel Over the White House (1933), All That Money Can Buy has no qualms about tying together religion and American (conservative) politics. One of the great surprises is how partisan the film manages to be, identifying Daniel Webster as a Republican and more than clearly sympathising with the Republican politics of the era (even though the real Daniel Webster was a member of the Federalist and Whig parties). And when it comes to the trial scenes, the film leaps off into ardent, flag-waving patriotism (the aspect that it is most faithful to the original short story).

The most incredulous part of the film is when Daniel Webster argues that the American constitution is superior to a pact that is forged in the heavens – at one point, he argues that Scratch is not able to lay claim to Jabez’s soul because he is a foreign prince and holds no legal authority in the US! Indeed, Daniel Webster’s argument for the saving of Jabez’s soul is seen in terms of American nationalism. Jabez’s freedom from damnation is directly equated with American freedom from oppression and the constitutionally enshrined right to self-determination. “Ladies and gentleman of the jury don’t let the country go to the Devil,” Edward Arnold’s Webster argues at one point. Webster’s climactic soliloquy is expectedly a rousing piece of writing, even if it is one that is completely swayed in terms of arguing for American strength and nationalism.

Director William Dieterle creates a number of striking images of the fantastique. In the first few minutes, there is a memorable sequence where Edward Arnold’s Daniel Webster sits writing as the shadow of Mr Scratch appears on the wall behind him, whispering in his ear that he could become President, before Webster angrily thumps the table and the shadow vanishes. The film is often shot in a stark, fervid light. People’s faces are underlit or come in narrow bands of shadow.

There are some fabulous scenes in the mansion towards the end with faces pressed up against the bay windows; the people from beyond the mountain eating at the banquet table; Simone Simon dancing with James Craig where we strikingly see her dress and the other dancers all gauzed out; and the captivating image of Walter Huston’s Scratch holding the souls of the damned as imprisoned butterflies. There is a marvellous scene during the dance where Scratch plays Pops Goes to Weasel as James Craig pursues Simone Simon through the crowd, dancing in and out of light and shadow, while all throughout Scratch whips up the dance on the fiddle calling out “faster, faster,” and the camerawork following them becomes more frenzied.

One of the more amusing issues today is just how much of an effect the Hays Code (which was set up in the early 1930s to decree what was morally permissible in Hollywood) has on the film. Jabez Stone is forced to swear “Concern it,” as he clearly was not allowed to say “Damn it” according to the morality of the day.

Actor Alec Baldwin directed and played Jabez in a modernised remake Shortcut to Happiness (2003) with Anthony Hopkins as Daniel Webster and Jennifer Love Hewitt as the equivalent of Scratch, but this version was left uncompleted because funding ran out, although the partially completed version has been released. Nelvana’s tv-made short film The Devil and Daniel Mouse (1979) replays the basic idea with cartoon animals and rock music. The story was also parodied in one of The Simpsons (1989– ) Treehouse of Horror episodes.

Director William Dieterle (1893-1972) was a German immigrant to the US. He made other genre works such as Six Hours to Live (1932), a thriller about a man resurrected from the dead; the excellent Shakespeare adaptation A Midsummer Night’s Dream (1935); the classic Charles Laughton adaptation of The Hunchback of Notre Dame (1939); the supernatural romance Portrait of Jennie (1948); and the German-made spy thriller/mad scientist film Mistress of the World (1959).