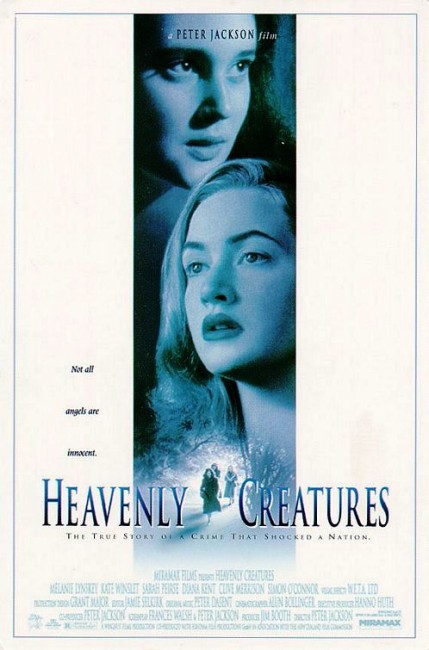 Christchurch, New Zealand, 1953. Shy 14 year-old Pauline Parker becomes best friends with classmate Juliet Hulme, the daughter of a visiting professor from England. Pauline is drawn into Juliet’s rich world of make-believe – of romances with movie stars and her idolizing of Mario Lanza – and the two enter into what they call ‘the fourth world’ where they create the fantasy kingdom of Borovnia. However, Juliet’s father thinks the relationship is becoming too obsessive and entering into homosexuality. When Juliet’s parents make plans to return to England, the two girls decide to run away together. When Pauline’s mother tries to stop them, they make plans to kill her.

Within the space of three films – Bad Taste (1988), Meet the Feebles (1990) and Braindead/Deadalive (1992) – Peter Jackson proved himself the master of the tongue-in-cheek splatter film. With Heavenly Creatures however, Jackson left that behind to make his first ‘serious’ film. It was Jackson’s bid for respectability. Certainly, Heavenly Creatures was hailed by many people who repudiated Peter Jackson’s earlier films for their gross-out factor. Heavenly Creatures‘s critical acceptance, including winning the top prize at The Venice Film Festival and being nominated for Best Adapted Screenplay at the Academy Awards, took Peter Jackson into an entirely different arena – the arthouse circuit and mainstream critical acclaim.

The fan press has a certain tendency to greet every successful low-budget director they feel they have discovered with accusations of selling-out when they make a big-budget film. While trying not to fall into the cynicism, one has to say they felt disappointed in Heavenly Creatures. While good, it never succeeds in scaling the heights ascended by Bad Taste, Meet the Feebles or Braindead.

Certainly, it does show a director who has matured in a remarkably short period of time – within the space of three films, Peter Jackson went from a genuine seat-of-the-pants filmmaker to someone who can use the Panavision frame, helicopter shots and CGI effects with a fluidity that often cries out in its boldness. Some of the photography here – like the cameras circling the Port Hills or the mid-shot jumps between the real world and fantasy – is simply marvellous.

At the same time though, Peter Jackson is still the teenage kid with a Bolex making home movies and taking great delight in conjuring up novel trick effects. Heavenly Creatures jumps in with all manner of effects magic – plasticine figures come to life, morphing landscapes, unicorns, giant butterflies and a malevolent Orson Welles stepped out of The Third Man (1949) and still in black-and-white. It is an impressive smorgasbord that Jackson serves up, yet at the same time one wonders, what is the point of all the Cinefex trickery?

1994 seemed a year where everybody was making lesbian-lovers-turned-killer movies – with the Canadian Fun (1994) and the British Butterfly Kiss (1995) also coming out around this same time. Both Fun and Butterfly Kiss create disturbing psychological portraits of psychopathically misguided lesbian infatuation. The least likely thing, when you think about it, that a film about lesbianism and murder should be is a CGI effects vehicle. Contrarily, Peter Jackson stated that the reason that he made Heavenly Creatures was a desire to try out the CGI technology he had just purchased.

You can see what drew Peter Jackson to the true-life Parker-Hulme murder that happened in 1954 – not the historical incident but the fact that he seems to want to leap off into the Fourth World with the two girls. In the documentary Good Taste Meets Bad Taste (1988), we are given a portrait of Peter Jackson’s younger years where he made plasticine stop-motion animated short films, not unlike the girls here. Jackson’s interest in the Parker-Hulme story seems less anything to do with portraying an incident that is well fixed within the New Zealand psyche than it is an affinity with the two girls florid dream lives.

For all that, the dreamland conjured up by the film remains resolutely unfantastic. While some of the unicorns, butterflies and morphings achieve brief moments of fantastic wonder, the dreamland never means anything on a symbolic level. Before he developed the wings that made him into an A-list director, Peter Jackson seemed regrettably stuck at being a physical director. His earliest films work the best because they are live-action cartoons – his idea of subtlety here is crudely cutting away to the heads of plasticine figures being chopped off when the girls get annoyed. Instead of showing the nature of the psychopathology that drove the two girls, all Jackson does is get inside their fantasies along with them but the great irony is that for all this he never tells us what is going on inside their heads. He is however aided considerably by good playing from Melanie Lynskey and particularly Kate Winslet in her big screen debut.

I may be alone in being a New Zealander who regards Heavenly Creatures as a so-so film – most other New Zealanders regard it very highly and it topped a poll of the best New Zealand films. (In a side note, I also briefly lived two houses away from the girl’s school that appears at the opening of the film). The Parker-Hulme murder does seem to be one that is strangely fixated in the national psyche – it had already fueled two books and a stage play prior to the film.

After Heavenly Creatures came out, an intensive international search was made for the whereabouts of the real Pauline Parker and Juliet Hulme and in an irony that was surely greater than any fiction, it was discovered that Juliet Hulme is nowadays better known as novelist Anne Perry who specializes in writing Victorian murder mysteries, while Pauline Parker was later discovered living in Kent, England.