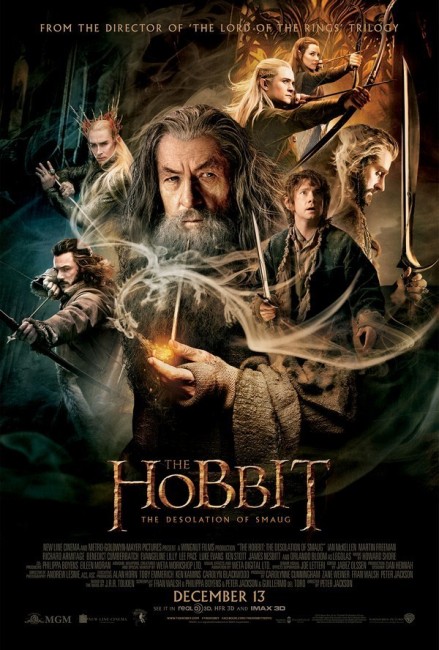 Fleeing from the attack by the goblins and Wargs, Gandalf leads Bilbo Baggins and the party of dwarves to seek refuge at the home of Beorn, a skinchanger who alternates between man and bear. Beorn directs them to follow the path through Mirkwood Forest. While Gandalf must leave on another mission, the rest of the group pass through the woods but are attacked by giant spiders. Saved by elves, they are thrown in the dungeons but are rescued by Bilbo who has used his ring to become invisible. Escaping down the river in barrels, they come to Lake Town where they encounter the bargeman known as Bard who they pay to smuggle into the town. Their presence is discovered by the soldiery of the town’s Master as they try to steal arms but Thorin persuades the townspeople of the riches that can be found in the dragon’s lair. They finally arrive at Lonely Mountain where Bilbo is in sent alone to confront the dragon Smaug and find the dwarven Arkenstone.

The way that Peter Jackson acted during the pre-production of The Hobbit – his underhand union busting activities, his falsifications and half-truths on the matter and manipulation of New Zealand people’s pride about the films – gave me cause to switch off him as a person in a major way. (See above-listed link for An Unexpected Journey for details). Even though Jackson’s dishonesty is something that strikes close to home for me, I went in determined not to allow this to affect the viewing of The Desolation of Smaug. After all, as I recently argued on the issue of Orson Scott Card and Ender’s Game (2013), dislike of an author/filmmaker’s politics and personal views should not stand in the way of critically evaluating their works.

All of that said, I went into The Desolation of Smaug hopeful but came out heavily disappointed. Indeed, I would argue that The Desolation of Smaug is the weakest work that Peter Jackson has delivered under the Tolkien banner to date. More and more, The Hobbit trilogy is starting to feel like Peter Jackson’s equivalent of the Star Wars prequels. Where George Lucas took nearly two decades to go from creating a trilogy of fan favourites to returning with a second trilogy where everything the fans had loved was drowned out by visual effects and the Lucasfilm empire’s obsession with marketing, Peter Jackson has done the same in under a decade.

Jackson doesn’t quite fail in the same way that Lucas did. Lucas’s failing was simply a misunderstanding of his fanbase, of thinking that the effects and toys were all that people wanted and somehow neglecting any of the warm character interplay, the sense of wonder and mythological arcs that drove his original trilogy. Jackson understands his fanbase only too well and has made a good deal of effort to give them more of exactly what they want – more of Tolkien’s world, more epic adventure, more visual effects wow, more endearingly likeable characters, the return of familiar characters and everything driven by a massively scaled plot where the destinies of a world and its different races play out against forces of ultimate evil.

The problem for Jackson is that all of this worked fine when it came to The Lord of the Rings where he was condensing a story that was originally published in three volumes. He and his co-writers were able to pare the text away to find the adventure at the core of the story and all of this worked perfectly well when delivered up as three films. The Hobbit, originally published by J.R.R. Tolkien as a children’s tale, is a single work that is four-and-a-half times smaller in size than the three Lord of the Rings books. However, this far slimmer work is being expanded out to fill three films each of around three hours running time – in other words, it is being stretched out to fill as much material apiece as each of the The Lord of the Rings films. Jackson and his co-writers have padded the story out by ransacking some of J.R.R. Tolkien’s other story fragments for filler. That and throwing in lots of fanservice where we see pieces from the original trilogy connecting up – reappearances of characters like Legolas, Galadriel and Saruman, meeting Gimli’s father, seeing the origins of Sauron. Even so, The Hobbit films are starting to feel over-extruded.

This feels particularly the problem when it comes to The Desolation of Smaug. For Tolkien, much of the book was essentially a picaresque where Bilbo and the party of dwarves have encounters with various peoples and creatures on their way to the Lonely Mountain. An Unexpected Journey spun a three hour movie out of the first six chapters of The Hobbit and likewise The Desolation of Smaug covers chapters 7-12 of the book. More so than any other section of the book, these six chapters are filled with brief picaresque adventures – the meeting with Beorn, the journey through Mirkwood Forest and battle with the spiders, the encounter with the silvan elves and escape by barrel, the arrival in Lake Town.

In the film, all of these are extruded out into major pieces of drama. The relatively brief encounter with the wood elves now includes an entire new character, Evangeline Lilly’s Tauriel, who becomes actively involved with the rest of the plot, even the suggestion of a romance with one of the dwarves (Aidan Turner), as well as the reappearance of Legolas (a much crosser and angrier Orlando Bloom).

The most extruded section is the arrival at Lake Town, which in one of the film’s most imaginative touches has been designed as built on piles in the midst of the lake. In the book, this section simply involves the dwarves turning up and announcing their presence to the townspeople, while in the film there is much subterfuge sneaking around the town where their presence seems in defiance of the rule of the town’s Master. The character of Bard is rewritten from what was simply a guardsman in the book to now become a bargeman and smuggler. The rest of the film’s story is padded out by Gandalf journey to encounter the Necromancer (scenes that only occur offstage in the book), who we learn is to become Sauron and has freed the Nazgûl.

The other problem is that none of these picaresque set-pieces seem terribly interesting. There is the constant feel that the story is having to inflate them into more than they otherwise are. The encounter with Beorn is rather flat – we see him transform from bear into man and then nothing much happens, about all he does is outfit the party and give some advice; the encounter with the spiders is a re-run with the journey into Shelob’s lair in The Return of the King but is surprisingly uneventful. Similarly too, the lurking around Lake Town seems filled with potential for revolt against the Master but never amounts to anything. The B plot with Gandalf off to visit the Necromancer is all build-up and much cryptic mumbling about what it means with very little actually happening.

The other Lord of the Rings films were filled with set-pieces that made you go wow – Gandalf’s encounter with the Balrog in The Fellowship of the Rings, The Battle of Helm’s Deep in The Two Towers, even the rescue by the eagles in An Unexpected Journey. Here there is little that ever achieves that. We have to wait the better part of an hour before Peter Jackson gets his act into gear and finally provides an enjoyably fast-paced knockabout scene where the dwarves escape by barrel down the river in the midst of an orc attack. Here, you at last feel the film is finding some of the old Jackson magic.

There is, of course, the encounter with Smaug at the climax. The dragon is magnificently brought to life, especially the image of it emerging covered in molten gold. Jackson also draws out the encounter between it and Martin Freeman, lets it take up the better part of twenty minutes whereas it was a much briefer affair and happened slightly differently in the book. The film arrives at the damp squib of a cliffhanger with Martin Freeman going “Oh no, what have we unleashed?” as the dragon flies off to attack Lake Town. By contrast to other dragon films like Siegfried (1924), The 7th Voyage of Sinbad (1958), Sleeping Beauty (1959), Dragonslayer (1981) and Fire & Ice (2008), this only feels as though Jackson is drawing the expected climax of a film out – ie. spreading it over two entire films – and turning it into something far longer than it needs to be.