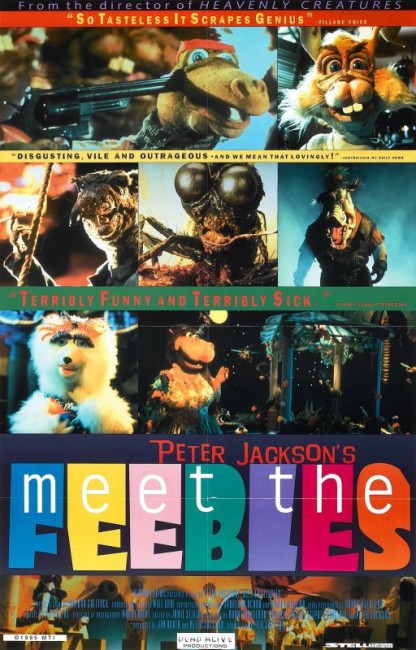 Only a matter of hours from the show being televised live, ‘The Feebles Variety Hour’ is in complete chaos – the show’s star Heidi the Hippo is in a suicidal depression; Sidney the elephant stand-up comic is being pursued by Sandy the chicken for alimony; Harry the Rabbit is diagnosed with AIDS; the lizard knife-thrower is getting desperate without his hit of heroin; and Blech the walrus manager’s crooked drug deals have finally started catching up with him.

Peter Jackson created a cult in New Zealand with his no-budget splatter comedy Bad Taste (1988), one of the funniest and most astute in the mid-1980s brand of popcorn splatter films. Meet the Feebles was Peter Jackson’s second film, which was made with a more substantial budget than Bad Taste.

However, there are some downright obscenely inspired moments, including a car journey down the alimentary canal of a giant octopus (all the cars in the film are Morris Minors – Blech’s limo is black stretch Morris Minor); a glitzy song-and-dance number about the joys of sodomy, complete with plaster exploding penises. The most bizarre moment altogether is a very funny parody of Platoon (1986) and Vietnam War movies – all conducted with Muppet frogs.

Meet the Feebles is one of those films where you either go with Peter Jackson’s way-out venture into bad taste – and enjoy the film – or don’t and hate it. Those who come to Meet the Feebles after Peter Jackson’s more mainstream-accepted ventures like Heavenly Creatures (1994) and The Lord of the Rings tend to wonder what on Earth they have sat down to watch.

The puppetry effects are extraordinarily good, all the more so for the fact that there was a less than one million-dollar budget involved. For Peter Jackson, Meet the Feebles represented a quantum leap over Bad Taste – by this point he has developed a real fluidity of directorial technique.

The adult take on the puppet show had been earlier conducted by the Belgian-made Marquis (1989) and subsequently by Jim Henson’s son Brian with The Happytime Murders (2018).

Peter Jackson’s subsequent films were:– the hilarious zombie splatter comedy Braindead/Deadalive (1992); his critically acclaimed hit Heavenly Creatures (1994), based on a true life story where two schoolgirl lovers murdered one’s mother; his disappointing big-budget Hollywood breakthrough, the ghost comedy The Frighteners (1996); then the enormous worldwide success of The Lord of the Rings: The Fellowship of the Ring (2001), The Lord of the Rings: The Two Towers (2002) and The Lord of the Rings: The Return of the King (2003); the remake of King Kong (2005); The Lovely Bones (2009); and The Hobbit: An Unexpected Journey (2012), The Hobbit: The Desolation of Smaug (2013) and The Hobbit: The Battle of the Five Armies (2014). Jackson has also produced District 9 (2009), The Adventures of Tintin (2011) and Mortal Engines (2018).