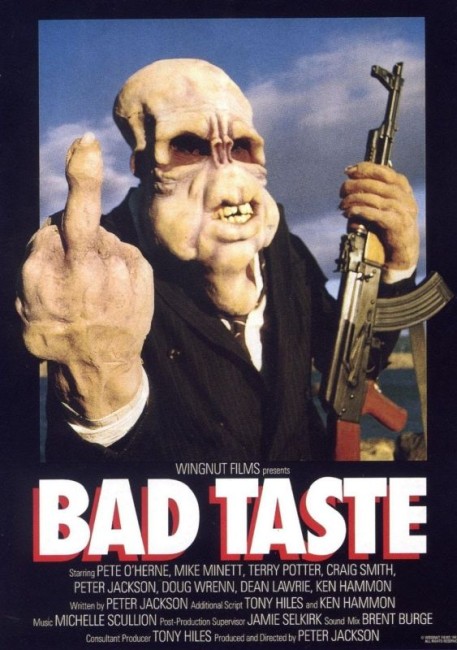 Four agents from the Alien Invader Destruction Service try to stop aliens who are packaging the inhabitants of a small New Zealand town as intergalactic fast-food.

Bad Taste was New Zealand’s genuine homegrown cult splatter film and of course the film that announced the genius of Peter Jackson to the rest of the world. Bad Taste was made on a budget of about only the smell of two used shoestrings and shot on weekends over a period of four years virtually single-handed by Jackson who brought a Bolex and learned how to make films by reading Cinefex magazine.

This is filmmaking as a work of fly-by-the-seat-of-the-pants ingenuity – Jackson created all the makeup effects himself in his own home, even hand-carving the machine-guns when New Zealand gun control laws would not allow him to use real semi-automatic rifles. Due to the vagaries of amateur cast members not turning up, Jackson ended up playing two of the cast himself (one ingenious scene requires one character he is playing to hack apart the other while tied upside down on a cliffside).

The premiere of Bad Taste in New Zealand in 1988 was to watch a cult phenomenon unfolding before one’s eyes. Scripting seems an afterthought, probably more due to the haphazard nature of filming. The times the film stops to deliver dialogue are its most absurd, while the dialogue-based jokes thrown at Nuclear-Free NZ and the North Island/South Island disparities fall flat.

Visually, Bad Taste is so over-the-top it achieves a unique level of surreal slapstick. It is like a Roadrunner cartoon in live-action. One character falls off a cliff, losing half his brains and then spends the rest of the film scooping up others’ brains to put in, although problems are then presented with a loose flap in his skull that has a habit of falling open and losing them all over again. When the same character comes bursting in through a wall, he leaves the outline of a figure holding a chainsaw in his wake. Later he chainsaws his way down through the insides of the lead alien to emerge at the other end to announce: “I’ve been born again.” A bazooka shell fired at a house goes not only in through one wall but out the other side to detonate a nonchalantly grazing sheep. The level of invention that has gone into all of this is both perverse in design and wholly ingenious in execution. Peter Jackson’s homemade makeup effects are more ingenious and convincing than many presented in films with big budgets.

Peter Jackson went on to make two other entries that were equally ingenious and inventive in the low-budget splatter stakes – Meet the Feebles (1990), a perverted spoof of The Muppet Show (1977-81), and the zombie comedy Braindead/Deadalive (1992). Jackson next graduated to the critically acclaimed Heavenly Creatures (1994) about two true-life New Zealand schoolgirl murderers and the disappointing ghost comedy The Frighteners (1996). He then conducted his epic adaptation of the Lord of the Rings trilogy with The Lord of the Rings: The Fellowship of the Ring (2001), The Lord of the Rings: The Two Towers (2002) and The Lord of the Rings: The Return of the King (2003), followed by his remake of King Kong (2005), The Lovely Bones (2009), The Hobbit: An Unexpected Journey (2012), The Hobbit: The Desolation of Smaug (2013) and The Hobbit: The Battle of the Five Armies (2014). Jackson has also produced District 9 (2009), The Adventures of Tintin (2011) and Mortal Engines (2018). It is certainly hard to believe from watching such a gungy, seat of the pants splatter film like Bad Taste that you were watching the work of someone who would later rank in the lists of the most powerful directors in Hollywood.

Strange and interesting piece of trivia about Bad Taste:– the film’s poster art features one of the aliens giving the finger. In the USA, this was considered too offensive and the poster was repainted so that the alien now has two fingers raised in the peace sign. Only in America!