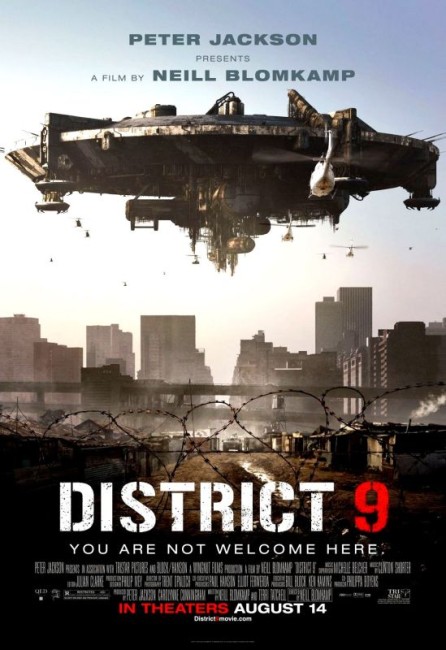 An alien ship has appeared over Johannesburg. The 1.8 million aliens that were aboard have been placed in a refugee camp named District 9. Because of human prejudice against the Prawns as they are known, the MNU (Multi-National United) corporation has been hired to provide private security to move the Prawns to another camp that has been established much further outside the city. MNU bureaucrat Wikus van der Merwe is placed in charge of the operation. This proceeds with much casual violence and indifferent shooting of the Prawns by MNU troops. In one of the District 9 shacks, two of the aliens prepare a special chemical extraction. When Wikus and the MNU troops burst in, Wikus is accidentally sprayed with the chemical. Soon after, Wikus starts to become sick. He is rushed to hospital where it is found that his body is fusing with alien DNA and that he is growing an alien claw. MNU whisk him away, seeking to exploit his biology to use the biochemically activated Prawn weapons they have confiscated but Wikus makes an escape. With a citywide manhunt under way for him, he takes refuge in District 9. As MNU troops come to recapture him, Wikus make an alliance with the aliens in order to conduct an armed break-in to get the fluid back from MNU headquarters, which can offer them hope to return home and he to regain his humanity.

District 9 was a sudden sleeper hit towards the end of the summer of 2009. The surprise about this was that it became a hit despite any indications otherwise – a director who had never made a feature-length film before; an unknown cast who had no international profile (moreover, were delivering their performances through South African accents), including a lead actor who had never acted before; a co-production between South Africa and New Zealand, neither of which exactly strike one as the filmmaking capitals of the world; and a promotional campaign that told audiences little about the film at all – the trailers even came with the appearance of the aliens digitally blurred out.

There was the recognised and internationally famous name of Peter Jackson on the credits, yet, while Jackson was instrumental in helping get the film off the ground, his name was not placed in centre profile during promotion. It is the rare case of a film becoming a success despite flying in defiance of all the adages that the suits that run the Hollywood studios generally agree on as being the things that help make films successful – things like talent with a known track record, big name stars, everything made to appear as though it takes place in the US lest audiences are switched off by foreign accents, and everything slotted into comfortable genre niches so that audiences can know what to expect.

District 9 was the debut feature from Neill Blomkamp, a South African born director who has been resident in Canada since his teens. Blomkamp had previously worked in visual effects as a 3D animator and made his debut with the short film Tetra Vaal (2004). Blomkamp followed this with Alive in Joburg (2005), which is a six-minute version of what would later become District 9, and other shorts like Adicolor Yellow (2006) and Tempbot (2006) concerning a robot that works as a temp office staffer.

The project that propelled Neill Bomkamp’s name to attention was the proposed Peter Jackson produced adaptation of the Halo videogame, which Blomkamp obtained after making three short films set in the Halo universe. When production on Halo collapsed in 2007, Jackson essentially handed Neill Blomkamp $30 million and the resources of his Weta Workshop to make whatever he felt like. It is nice to see Peter Jackson starting to do at last what he should have several years ago – using his considerable resources and clout to give other filmmakers a leg up into the industry in much the same way that other big names like Steven Spielberg did back in the 80s and indeed Robert Zemeckis did with Jackson himself on The Frighteners (1996) – although elsewhere so far all he has served to do is use it to boost filmmakers who hardly need a recognised name attached such as Steven Spielberg with The Adventures of Tintin (2011).

District 9 is a unique and original film. I stop short of slapping it with an instant classic label as many have – it climbed onto the IMBD’s Top 250 films list within its first week of release, for instance. It feels like Neill Blomkamp has drawn his inspiration from Alien Nation (1988) and its idea of alien refugees arriving on Earth where they promptly become the new minority and are banished to their own ghetto. In particular, District 9 feels like Blomkamp has taken the early sections of Alien Nation – the tv footage of their ship arriving in the Mojave Desert and the scenes cruising through their ghetto – and extended them into a full length film. District 9 is maybe Alien Nation as reconceived by way of the harsh and brutal future of Children of Men (2006). In particular, the war in the shantytown towards the end of the film looks as though Blomkamp has taken a substantial amount of inspiration from the extended climax of Children of Men.

District 9 works best in its first third during the MNU evacuation of the Prawn shantytown, which is enacted Found Footage style as though it were tv camera footage. Like Cloverfield (2008), Neill Blomkamp does a fine job in blending CGI effects and animatronics with the raggedly grainy affected realism of handheld video camera footage. What also comes through this is a considerable degree of savagely dark irony – in the casual brutality of the soldiery and blatant lies told to the aliens by the bureaucracy in a laughable attempt to make them conform to human expectations.

District 9 is not a film that leaves one with a high opinion of humanity – even a similarly brutal film like Children of Men gave you the hope that there was something worth fighting for. By contrast, District 9 is a savage indictment of human greed, corruption, prejudice and naked self-interest and has no good things at all to say about authority, the South African police forces, private security forces and multi-national corporations, even the destitute that live in the Johannesburg shantytowns – indeed, almost any human figure depicted in the film.

District 9 is a highly political film. It takes very little to imagine replacing the aliens with people of a different ethnic group and to envisage the story taking place say in somewhere like a Palestinian refugee camp under the contemporary Israeli genocide. It is a film, one expects, that needed to have a South African to make it. South Africa is a country where for most of the 20th Century minority white rule had created a legally entrenched racial divide (apartheid) that regarded all Black and Coloured peoples as second class citizens who were forcibly isolated into their own areas known as ‘homelands’. This saw racial segregation of almost all areas of life – education, public transport, housing, even separate hospitals. Riots in famous areas like Sharpeville and Soweto in the 1960s and 70s saw increasingly heavy-handed military tactics being employed to maintain control, including the jailing of famous protestors like Nelson Mandela and the murder in custody of others like Steven Biko. International economic pressure eventually forced the government of F.W. de Klerk to dismantle these policies.

Although apartheid has been removed, South Africa still remains a highly divided nation today with parts of cities, including Johannesburg, remaining virtually lawless shantytowns filled with dissolute, primarily Black, poor. Perhaps the scariest thing about District 9 is that Neill Blomkamp used a real shantytown as location for the fictional District 9 – seeing it on screen, it seems overwhelmingly inhumane set of conditions in which to live, only for Neill Blomkamp to then tell in an interview how the only set they needed to build was Christopher’s shack.

The first third of District 9 makes for extremely good science-fiction. Thereafter, it becomes more piecemeal. The film feels very much like Neill Blomkamp had a good idea about depicting the treatment of aliens in a refugee camp but never knew what to do with it beyond the first act. After the refugee camp mockumentary ends, the story turns into something akin to The Fly (1986) where protagonist Sharlto Copley starts to mutate into an insect creature as a result of exposure to the alien chemical. This becomes an opportunity for Blomkamp and the Weta Workshop to pile on icky effects and goo, while the plot becomes a standard Wronged Man on the Run type thriller. Even the Found Footage approach is dropped in favour of a standard visual schema.

The latter third of the film becomes a different type of film again. Here Neill Blomkamp turns it into an action film as Sharlto Copley and Christopher the Prawn conduct an armed break-in to the MNU laboratories where everything ends in a massively scaled shootout in District 9 with Sharlto Copley taking on his pursuers in a Transformer-styled power suit.

District 9 starts well and then meanders because it feels like the writers did not have a clear idea of where to wind it up. It becomes inconsistent, for instance, to have the refugee camp first regarded as a place where we feel shock at the aliens being unfeelingly uprooted and casually massacred, only for the same terrain to be turned into the venue for an action movie in the last section where we are meant to be amazed and excited by the same people’s homes being blown up and riddled with heavy-duty gunfire without any apparent concern for the enormous cost of life this would undoubtedly entail. It also becomes apparent that what we took for sharp and witty verisimilitude in the first section – detail regarding the Nigerians, biologically activated weaponry – only ends up being grist sometimes too obviously for plot points later in the film. It does seem ever so slightly incredible, for instance, that the same fluid extract that has the power to transform Sharlto Copley into a Prawn is also the one that is vitally needed to power the alien mothership and get everybody back home.

(Nominee for Best Actor (Sharlto Copley) at this site’s Best of 2009 Awards).