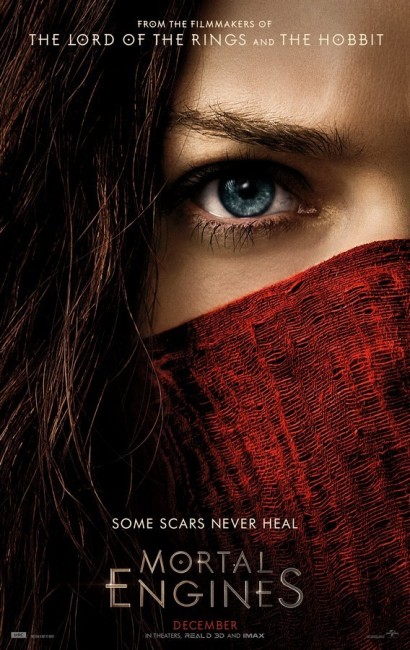 After much of the world has been destroyed by nuclear war, the remaining cities have built themselves into vast motorised vehicles that roam the plains of Europe preying on other cities for spare parts. The small town of Saizhaken is now devoured by the city of London. As the townspeople are absorbed on board, Tom Natsworthy, an apprentice at London’s library, is witness as Hester Shaw attempts to kill Thaddeus Valentine, the Chief Engineer of London. Tom pursues Hester who tells him that Valentine murdered her mother before she falls into the waste chute. Fearful of discovery, Valentine shoves Tom down the chute after her. Abandoned on the plain, the two travel together on foot. Tom learns how Valentine killed Hester’s mother, an archaeologist, to take a piece of salvaged equipment that will allow him to activate a powerful weapon known as The Medusa. Valentine now ousts London’s mayor and takes control of the city and prepares The Medusa. At the same time, he unleashes the near-invincible cyborg Shrike who sets out after Hester killing all in its way. Tom and Hester are rescued by the rebel Anna Wing who comes from the faction of Anti-Tractionists that live beyond the vast Shield Wall that blocks Europe from Asia. They try to stop Valentine as he plans to unleash The Medusa to obliterate the wall.

Mortal Engines joins the list of successive Jackson efforts post-Lord of the Rings that went nowhere. It was a project he intended to direct at one point before stepping back to a producing/writing roles and handing the directing duties over to Christian Rivers, who has worked as a storyboard artist for Jackson since the 1990s. The film premiered at Christmas 2018 and proved a huge box-office flop, only earning back $15 million in the US after being made with a $100 million budget (although it did fare better internationally).

The film is based on Mortal Engines (2001), the first in a tetraology of Young Adult novels by British author Philip Reeve, and is followed by Predator’s Gold (2003), Infernal Devices (2005) and A Darkling Plain (2006). Reeve also wrote a prequel trilogy of books beginning with Fever Crumb (2009) that is set around the creation of the traction cities.

Unlike most Young Adult works, which usually keep their dramas centred around the romantic triangles and perils of their central characters that never seem to amount to much more than conflated schoolyard squabbles, Mortal Engines is a Young Adult series carried by a big science-fiction concept – that of cities having become like the equivalent of giant motorised stock cars, pursuing each other across the post-apocalyptic plains.

It is a film where Jackson and Christian Rivers are clearly taken by the visual possibilities of bringing such a world to life. It is unique and original one, the like of which we have never seen any equivalent on screen before. This is immediately apparent from the opening scene where the small town of Saizhaken is pursued by the behemoth of London. We see the motorised cities moving about on giant tractor wheels, the stalls in the street quickly folding up to becoming armoured plates as the citizenry take cover. The chase is an exciting set-piece (even if I have my doubts that something as massive as a motorised city could race precariously close to the edge of a cliff without causing the entire area to collapse – the weight load of the cities must be astronomical) before the smaller town is snagged with grappling hooks and drawn into the maw of London.

All involved seem to have had an enormous amount of fun with the design of the world. London comes with numerous familiar landmarks such as Big Ben, St Paul’s Cathedral and where the London Eye has been transformed into an elevator, while down below the London Underground still exists and there are red phone boxes everywhere. We even get militarised versions of the familiar British bobby’s uniform. (Although the illusion does get punctured when we see that the library prominently features product placements for the Minions, which also happen to be distributed by Universal).

This does lead to one of the major failings of the film and that is Peter Jackson-itis. Jackson has an unparalleled command of a certain type of visual effects driven fantasy and has created one of the leading effects studios in the world. The downside of the Jackson’s films is that take away the visual effects and his films are rather one-dimensional where it feels like Jackson is only interested in creating effects sequences. This is most evident when it comes to The Lovely Bones where a tragic tale about a girl in the afterlife is hijacked by endless effects sequences, or The Hobbit trilogy where a slim original is padded out to a nearly nine hours worth of screen time with overblown effects sequences. You can also see in many of his films that effects become a substitute for character – where Jackson should be allowing his actors to do the job for him, he over-emphasises inner mood with physical caricature and effects highlighting – or he hammers home amateurish symbolism until it becomes crashingly obvious to every single person in the audience.

Jackson might not be directing Mortal Engines but his imprint is all over it. This is best evident in comparing the film to the Mortal Engines book. The scene where Tom pursues Hester down into the bowels of the city is now blown up into a sequence where they have to run in between giant buzzsaws carving up the devoured town. The scenes at Rustwater focus not on the town or auction but on a sequence with Tom and Hester climbing up the massive wheels of a departing city pursued by the Shrike. The sky city Airhaven is improbably designed as a vast floating structure like some elaborate mobile (you keep wondering what keeps it afloat). The Shrike is not merely freed but Hugo Weaving has to blow up an entire oceanic platform that it has been imprisoned in. In the book, The Medusa was never activated but here we have a massive death ray weapon blowing up The Shield Wall, all in between an aerial battle sequence that is extruded out to some fifteen minutes. The effects are extremely impressive and the show worth watching for them but they do also get in the way of the drama.

The film is fine in its images of people in battle, giant cities racing about and so on. On the other hand, the actual drama proves hackneyed and one-dimensional. Nobody seems to have told Jackson and co that The Shrike comes out as yet another killer robot a la The Terminator (1984). It is played that way for most of the film until a surprise scene in the middle where its nature is abruptly turned on its head in a quite lovely montage of scenes where we see it raising an orphaned Hester – only with that over, it is back to more killer robot stuff. The scene where it suddenly discovers emotions just before it dies has an incredible corniness to it that you greet with disbelief. Similarly, the climactic showdown between Hester and Valentine is rendered ridiculous by the insertion of an “I am your father, Luke”-like twist. It seems sad of Jackson and co that they could not see these scenes for what they are because for anybody except maybe the young who lack a familiarity with the cliches, it is corny, stale drama that seems to be screaming out for a better writer.

(Nominee for Best Special Effects and Best Production Design at this site’s Best of 2018 Awards).