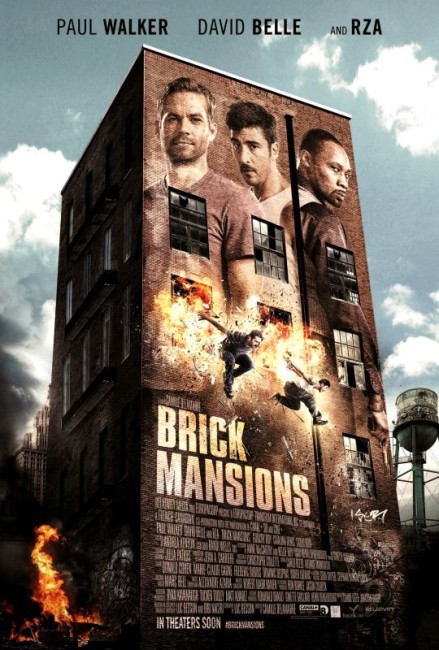 Detroit, 2018. The most troublesome ghetto area of the city have been converted into a walled-off neighbourhood known as Brick Mansions and its populace abandoned inside. Within Brick Mansions, Lino Dupree takes a stance against drug dealers selling in his building by destroying their stash. Brick Mansions drug lord Tremaine Alexander responds by abducting Lino’s girlfriend Lola but instead the two of them capture Tremaine and deliver him to the border police station – only for the dirty cop there to release Tremaine and jail Lino. Lino angrily responds by killing the captain. Meanwhile, Detective Damien Collier is determined to Tremaine who was responsible for killing his father. He is called in by the mayor and told that a nuclear weapon has been stolen by Tremaine’s men. By opening the container, they have activated the bomb and it is due to go off inside Brick Mansions within a matter of hours. He is assigned to go in and deactivate it. Damien arranges for he posing as a prisoner and Lino to be placed in a prison transport where he then conducts a breakout and crashes through into Brick Mansions. Damien sees through his ruse but agrees to work with him to get Lola back from where she is being held as Tremaine’s prisoner. Together, they take on Tremaine’s heavily armed gangland forces in order to get to the bomb.

Banlieue 13 (2004), known as District 13 in the US, was an sf/action film written/produced by Luc Besson and directed by a then unknown Pierre Morel. Besson fairly much borrowed the premise from Escape from New York (1981) in the set-up of a police officer and his companion venturing into a walled-off ghetto to deactivate a nuclear weapon procured by ganglords. This was a reasonable success, all due to Pierre Morel’s electrifying choreography of the action scenes with Cyril Raffaelli and in particular parkour founder David Belle leaping across rooftops and through apartment windows and the like. This led to a sequel, Banlieue 13: Ultimatum (2009), which is lesser but also has Besson, Raffaelli and Belle on board and still contains some fired-up action scenes.

As with a great many other films of the last few years – see the likes of Insomnia (2002), The Ring (2002), The Departed (2006), Bangkok Dangerous (2008), Let Me In (2010), The Girl with the Dragon Tattoo (2011) and Pusher (2012), among many others – Brick Mansions is an English-language remake of Banlieue 13. Luc Besson solo writes the script and co-produces the film, while David Belle is back and plays exactly the same character he did in the first film. Cyril Raffaelli’s detective has been recast with Paul Walker (in his penultimate film performance following his fatal vehicular accident in 2013).

The script is fairly much almost the same as it was in the first film with some minor tweaks – Lola goes from Lino/Leito’s sister to his girlfriend and is not kept as a drug addict by the gang, for instance. The location has been moved from Paris to Detroit, a move that makes the story work with a good deal more resonance when seen in terms of US gangbangers and drug lords. The choice of a futuristic Detroit as location is perhaps also a canny attempt to jump aboard the remake of Robocop (2014).

The remake is under the hands of Camille Delamarre, who was previously an editor on Luc Besson-produced films such as Transporter 3 (2008), 22 Rounds (2010), Colombiana (2011), Lockout (2012) and Taken 2 (2012), before making his feature-length directorial debut here and going on to make The Transporter Refueled (2015). As per the original, Delamarre has David Belle getting into his parkour scenes within the first few minutes in a furious chase bouncing off walls, leaping through windows of apartments, up fire escapes and across rooftops. This is kinetically exciting however having seen parkour action employed in other films in the last few years, this now seems routine by the time of Brick Mansions.

Crucially, the opening sequence fails to kick in with the same electrifying buzz that the opening scenes of Banlieue 13 did. Moreover, whatever rawness these and other sequences might have held is ruined by the constant shakycam. There are a few kinetic sequences throughout – a couple of jaw-dropping jumps between buildings, a slow-motion sequence where Paul Walker and David Belle leap up into the air between two oncoming cars leaving them to crash into each other – but little that stands out. Most of the car chases, fights and shootouts seem routine action movie set-pieces, which is never something you could have said about either of the original Banlieue 13 films.

With the action element failing to ignite much, there seems little else to Brick Mansions. The central problem this film has is that the premise of the original was so slight that without the parkour sequences there is even less to the film. The premise of the original was lifted from Escape from New York, while the idea of razing the area for rebuilding has been taken from films like 1990: The Bronx Warriors (1982) and Robocop 3 (1993). (Although surely, the idea of a city mayor wanting to use a nuclear weapon to raze a ghettoised inner city suburb is a scheme that approaches almost completely insanity even as super-villain’s world-domination schemes go).

As a science-fiction film, Brick Mansions seems negligible – Luc Besson seems to be actively avoiding engaging with any of the film’s ideas beyond the absolute minimum needed to set the film up. For example, the Banlieue films keep leaving me wanting to find out more about the sociology of the walled-off neighbourhood. Here, other than knowing that drugs are scarce on the inside, there seems little difference between both the inside and outsides of the wall – if drugs are scarce on the inside, would there not be just as much difficulty getting the luxury cars RZA and the others readily drive, and even more crucially the gas to fuel them?

Paul Walker is adequate in the lead role – no more, no less than we came to expect from Walker. On the other hand, David Belle seems mellow up against him, lacking the toughness that his character had in the original. The surprise among the cast is rapper RZA of Wu Tang Clan fame. I had fairly much dismissed RZA as an actor after his far too laidback performance in his directorial debut The Man with the Iron Fists (2012) but he surprises here. He has a charismatic presence, a natty set of threads and some of the film’s best lines where he holds his own and manages to out-act both Walker and Belle.

The main problem with the film is the unbelievable eleventh hour redemption of RZA’s villain. [PLOT SPOILERS]. Here he, Walker, Belle and the residents unite after realising that the mayor was trying to nuke Brick Mansions and conduct a revolution by invading City Hall. The epilogue shows the walls having been broken down and everybody living in unity, with even Walker driving through the suburb and waving to Gouchy Boy, while posters in the background announce that RZA is running for mayor.

It is an ending and fadeout that seems so utopian in its outlook as to be absurd – one where we are suddenly asked to forget that RZA, Gouchy Boy and his gang who have made millions as drug dealers and spent the preceding eighty or so minutes employing massive firepower in an attempt to kill Walker and Belle, torture Belle’s girlfriend and turn a nuke back on the city are actually a bunch of decent, oppressed people who only needed to discover their solidarity against a common foe to instantly set their gangland lifestyle aside, forgive one another and settle down in peace.