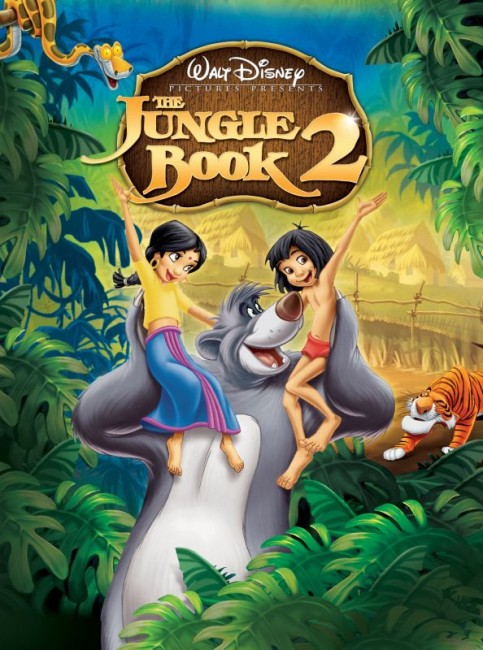 Living in the village with his adopted human family, Mowgli misses his animal friends and the ways of the jungle. His old friend the bear Baloo misses Mowgli too. Baloo ignores the advice of the other animals and sneaks into the human village to abduct Mowgli and bring him back to the jungle. Mowgli’s young girl friend Shanti follows, thinking Baloo is a wild animal. Meanwhile, Shere Khan has returned, seeking revenge for the humiliation that Mowgli showed him.

Once upon a time, animators that cared created Disney Studios. Walt Disney himself placed enormous care and visual invention into his Mickey Mouse and Donald Duck shorts, while later feature-length efforts such as Snow White and the Seven Dwarfs (1937) and Fantasia (1940) pushed boundaries to try and define animation as an art form. In the 1990s however, Disney came to be run by The Suits. During this era, the studio seemed dominated by corporate mentality – it seemed less as though it was run by artists than it was by stockholders determined to milk the label for all it can be exploited for. While in the feature-length animation department Disney has been pushing boundaries, elsewhere its’ back catalogue has been all but ransacked and sold in a garage sale. There has been an extraordinary amount of merchandising sold in the Disney name and tv movie remakes of many of their films.

The Jungle Book was not one of the memorable Disney films – it was only a series of songs and knockabout talking animal antics without even a plot, although proved likeable enough. That said, The Jungle Book 2 is an astonishingly banal follow-up. There is incredibly little to it. Mowgli is taken back into the jungle; we encounter the familiar characters from the original – Baloo, Bagheera, Colonel Hathi, the Cockney-accented vultures; Shere Khan prowls around menacingly – and that is about it.

Outside of revisiting the old characters, there seems even less plot than there was in the original. The sequel certainly brings more polished animation, conducted at Disney’s Australian television animation division, although this is nowhere near the quality of the work in their contemporary feature films. The entire film has the feel of a video-release that has been pushed out onto the big screen.

The Jungle Book 2 also echoes the conservative tone that underlies many Disney films. Many Disney films – Lady and the Tramp (1955), The Aristo Cats (1970), Oliver & Company (1988), Bolt (2008) – make a dichotomy that draws a line between playful street life and the starchy domesticated life of the pet. The Jungle Book 2 draws a similar dichotomy between the jungle and the village – the jungle is seen as a place of perpetual joy and fun, filled with play and singing, while the village is equated with adulthood, duty and seriousness. At one point, the animals even react in horror to learn that the village is a place where people work. Mowgli, like Tarzan, is a character that sits on a dividing line between civilisation and primality.

What is interesting here, in seeing that dichotomy translated into the Disney symbolic divide between play and adulthood, is how Mowgli is eventually persuaded to abandon frivolity and return home to the arms of his substitute human family. For a film that sells itself by appealing to playful fun and silliness, this is a strongly conservative message – as though the film is sternly wagging a finger at children, telling them that they have had their fun and now they must return home and be grown up.