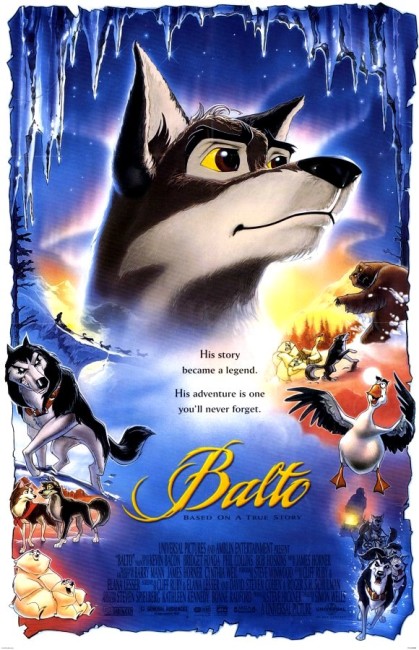 A grandmother tells her granddaughter the story of what happened in Nome, Alaska in 1925. The people of Nome were holding the annual dog race to see which dog was the fastest where the winning dog would lead the husky teams. It was expected that the self-important Steele would win the race but unexpectedly the wolf-dog Balto became the winner. Rosy, the grandmother who was then a child, became ill with diphtheria and the authorities had to radio for anti-toxin to be brought in. Steele tricked the judges into thinking that Balto was feral. Steele was then appointed the head of the husky team and given the assignment to transport the anti-toxin over a several hundred-mile journey. Along the way, the dog team became lost but Steele refused to admit it. Balto went to their rescue. However, Steele became resentful of the challenge to his leadership and made every effort to sabotage the expedition. Balto strove to fight onwards against natural disasters and overwhelming odds.

People used to liken Steven Spielberg to a modern Walt Disney. Although oddly, Spielberg has yet to succeed in the one area that the Disney name is usually associated with – animation. Up until the establishment of DreamWorks SKG, Spielberg’s ventures into animation made under his Amblin banner were the least successful of his films, caught either between the passable and the eminently forgettable – the American Tail films, The Land Before Time (1988) and We’re Back: A Dinosaur’s Story (1993).

Balto, good to report, is the first Spielberg animation film to attain some of the quality of the better Disney animated films. Things subsequently improved with the establishment of the animation division of DreamWorks and hits like Shrek (2001), Madagascar (2005) and Kung Fu Panda (2008) but with these Spielberg appeared to be distant from the process and his name was not on any of the films.

Balto is a satisfying effort that works on every level. Its emotions are warm and engaging and touch the heart in all the right places without being saccharine – an accusation that one could easily make of director Simon Wells’ previous effort We’re Back. The humour is warm and naturalistic. When it comes to the usual pratfalling sidekicks that have become a standard staple of animation, Bob Hoskins’s Russian goose proves one of the most charming of such characters that one can remember in some time. His attempts to get Balto to be a dog – lapping at a bowl, chasing a cat toy or tossing off puns like “I’m so scared I’ve got people-bumps”– are hysterical.

Most of all, the film is dramatically exciting with some marvellous scenes such as the fight with the bear where Balto skids out onto the ice and goes under, or the scenes at the climax racing to cross a collapsing ice bridge, dodging falling icicles and racing to beat the coming avalanche. All in all, Balto is a wonderfully rounded and satisfying animation effort. It may surprise one to know that Balto is based on a true story. Although this has clearly been considerably elaborated – the animals here can talk, for one.

Director Simon Wells is the great-grandson of science-fiction writer H.G. Wells. Simon Wells has co-directed the animated likes of An American Tail: Fievel Goes West (1991), We’re Back! A Dinosaur’s Story (1993) and The Prince of Egypt (1998) and then on his own moved into live-action with the adaptation of his great-grandfather’s The Time Machine (2002), before going onto the motion-capture animated Mars Needs Moms (2011). All but the last of these films are made under the Spielberg banner at either Amblin or DreamWorks.

There were two video-released sequels produced by Universal with Balto: Wolf Quest (2002) and Balto III: Wings of Change (2004).