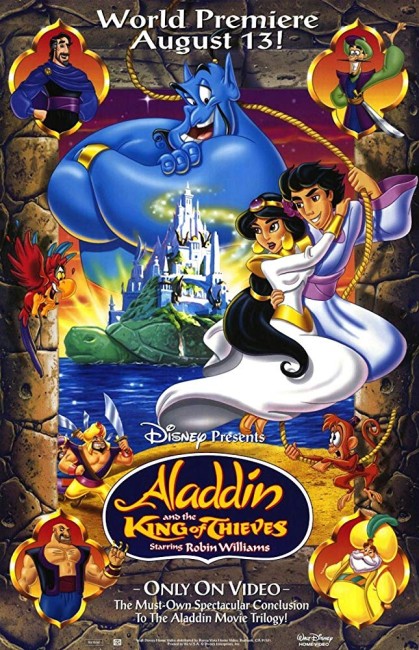 Aladdin and Jasmine are about to be married when the ceremony is raided by Kassim the King of Thieves and his forty compatriots. Afterwards, Aladdin realises that the thieves were attempting to steal a sceptre that contains an oracle. The oracle allows Aladdin one question and so he wishes that he could know who his father was. The oracle guides him to the thieves’ secret cave where Aladdin is shocked to find that Kassim is his father. Aladdin happily wins his father’s acceptance and takes him back to the palace. However, Kassim is more interested in obtaining the oracle and finding the greatest treasure in the world – the whereabouts of the legendary hand of King Midas. Meanwhile, Kassim’s scheming second-in-command Saluk believes that Kassim has betrayed them and comes determines to avenge this.

Aladdin and the King of Thieves was the second sequel spun off from Disney’s popular cinematically released Aladdin (1992). The King of Thieves had been preceded by the video-released The Return of Jafar (1994), which began the lamentable modern trend of Disney sequelising their animation classics with cheaply made video releases. In the midst of this there was also the animated tv series Aladdin (1993-6) from most of the same creative talents and a few years later there would be the live-action remake Aladdin (2019). While Aladdin was popular, I can’t say I ever liked it or its sequels – it is an approach where the Arabian Nights story has been entirely upstaged by a relentless modernism and a pandering to popular culture in-referents.

Aladdin and the King of Thieves is directed by Tad Stones, who co-directed The Return of Jafar and numerous episodes of the tv series. This time Stones has pumped up all the qualities that made Aladdin and Jafar annoying – namely the pop culture references and the character of the genie, which came to dominate the Aladdin films by dint of its manic extroversion. (Robin Williams, who was absent for The Return of Jafar, has returned here to voice the genie). At least by celebrating these facets and throwing to the wind everything else, Aladdin and the King of Thieves achieves a kind of manic enjoyment that makes it more persistently likable than the other two films.

The genie now goes through an utterly bewildering series of transformations – everything from Picasso to Don King, Woody Allen, a talkback host, Forrest Gump, Robin Williams’s Mrs Doubtfire, The Marx Brothers, Bob Hope and Bing Crosby, a SWAT team, the ED209 robot from RoboCop (1987), Marlon Brando as The Godfather and Albert Einstein come to expound his ‘theory of relatives’.

There are cameos from a whole stack of Disney characters – Cinderella, Snow White, Pocahontas, Goofy, the sidekicks from The Lion King (1994), with the genie even appearing in black-and-white as Steamboat Willie. The film makes a good many puns – “It’s Anthony and Cleopatra,” the commentator at a celebrity event says, “and they’re bringing a [Caesar] salad.” King of Thieves also grafts the Ali Baba tale from the Arabian Nights onto the Aladdin adventure, which gives it modestly more substantial story than the previous films.