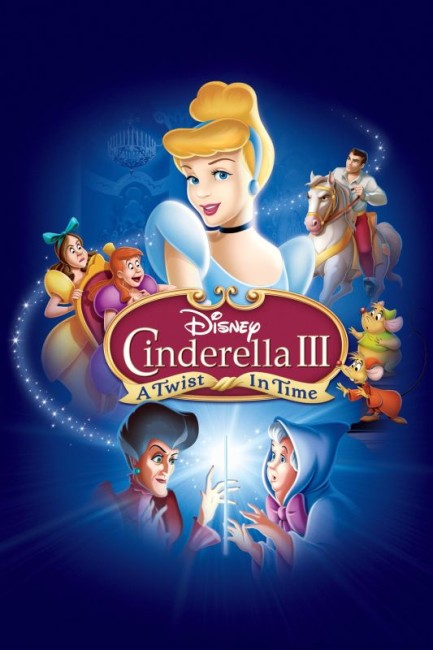 The ugly stepsister Anastasia discovers that Cinderella’s pending marriage to the prince is all down to the fairy godmother’s magic and so she steals the fairy godmother’s wand. The stepmother uses the wand to turn the fairy godmother into a statue and then winds time back to when the prince’s courtiers searched the land with the glass slipper. When the courtiers come to visit them, she magically transforms Anastasia’s foot to fit the glass slipper. Anastasia is whisked to the palace and the prince proclaims her his true love – albeit with the aid of the magic wand to make him think it was Anastasia that he was dancing with at the ball. Cinderella follows to the palace, trying to get her love back. In touching Anastasia’s hand, the prince realises that something is not right. As the stepmother hurries the wedding date along, Cinderella tries to steal the wand back to reverse things.

Amid this, Disney had previously sequelised their Cinderella (1950) with Cinderella II: Dreams Come True (2002). A Twist in Time marks a peculiar fad amid these where, with what only reads as creative desperation, the films offer up alternate versions of the original. This also includes The Lion King 1½/The Lion King 3: Hakuna Matata (2004) where the original was retold from the point-of-view of the talking animal sidekicks.

Cinderella III: A Twist in Time comes from Frank Nissen, a former animation designer for Disney whose previous directorial outing was Pooh’s Heffalump Movie (2005). The idea of an alternate version of the original Cinderella where events turn out differently is intriguing, if gimmicky. The same basic concept, where Cinderella’s stepmother gains control of magic that allows her to alter fairytales and let the bad guys win was also used in Happily N’Ever After (2006), which came out two months before Cinderella III.

Alas, everything transpires very predictably – once the premise is unveiled, the film works its way to its resolution in the straightest line possible. Thus Cinderella goes to the palace to get the wand back and reverse things, the stepmother does everything she can to make the prince marry Anastasia, the prince detects a wrongness, the stepmother tries to get rid of Cinderella while hurrying the date of the wedding up etc etc.

I have always maintained that Cinderella was one of Disney’s more overrated classics. It did create a fairytale, albeit in a ponderous and self-important way. Here fairly much everything that happens in Cinderella III is construed as slapstick – set-pieces with Cinderella chasing the mice through the palace kitchens, a frenetic fight through the halls to get the wand, the shrinking/enlarging of Lucifer the cat, even the king undignifiedly losing his pants as he races to prevent the prince going on his quest. The animation is routine and nothing standout. There has also been the decision made to add banal songs over everything, which only serves to drag out the slim 70 minute running time.