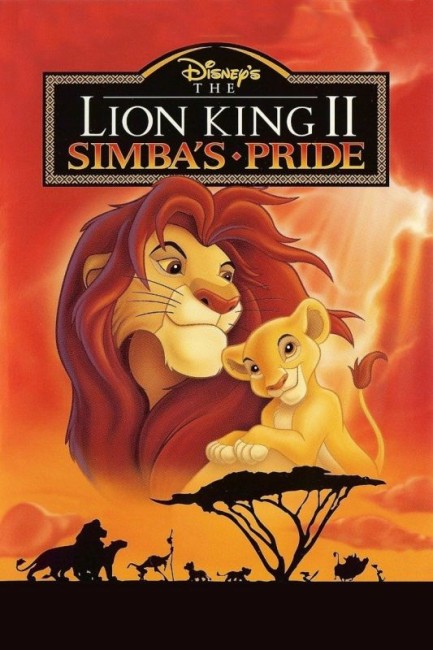 Simba and Nala give birth to a daughter Kiara. As Kiara grows up, a fearful Simba forbids her from leaving Pride Rock. However, Kiara ignores this and wanders away where she meets a young male cub who turns out to be Kovu, son of the late Scar. They are discovered and separated by their mutual parents. Kovu’s mother Zira takes him and educates him in the ways of hate that his father gave himself to. Kovu is then sent back to ingratiate himself at Pride Rock where he is accepted by Simba. As they spend time together, Kiara begins to fall for Kovu, not realising that his real mission is to seek vengeance for his father’s death by killing Simba.

The Lion King II: Simba’s Pride was the first of two – or at least one-and-a-half sequels – to The Lion King (1994). The other was The Lion King 1½/The Lion King 3: Hakuna Matata (2004), which was actually a retelling of the original film from the point of view of the talking animal sidekicks. There was also Timon and Pumbaa (1995), a further animated tv series featuring the two sidekicks. The Lion King (2019) was a subsequent live-action remake.

Simba’s Pride is a little better than many of the other direct-to-video animated Disney sequels. For one, it goes so far as to bring back many of the voice names behind The Lion King – Matthew Broderick, Nathan Lane, Ernie Sabella, Moira Kelly, Robert Guillaume and even James Earl Jones putting in an appearance as the late Mufasa.

The film opens on a blatant copy of the epically scaled opening from the original, which sets a disappointing tone. Eventually though, Simba’s Pride gains its own strengths and becomes a reasonable film in its own right. Though the animation has been produced on the cheap, it comes with a reasonable quality and is nicely drawn. There are also some exciting set-pieces, especially one where Kiara flees from a grass fire and is saved by Kovu.

The story sets up a reasonable character arc – the son (Kovu) groomed by his mother to infiltrate Simba’s camp and kill him where he instead becomes attracted to Simba’s daughter Kiara and everything wavers between romance or vengeance. (This being the type of film it is, there is no particular surprises in guessing which way it will go, but the film crafts all of this reasonably well).

The songs, which are usually eminently forgettable in these affairs, are fun and well written for once. There is a fine number where Suzanne Pleshette as the scheming Zira weaves her web of evil in Kovu’s mind. Standout is the Exile number with its wonderful contrast of baritone, alto and tenor voices. It all adds up to one effort that is unexpectedly decent in the creatively impoverished arena of the Disney direct-to-video animation sequel.

One of the recurrent themes that runs through these direct-to-video sequels is their featuring the children of the characters from the original film – see also The Little Mermaid II and Lady and the Tramp II. Although having gone on to the next generation, there is something amusing to now seeing the free-spirited characters of the original having become conservative parents who are issuing warnings of potential danger to their children who are venturing out into the same wilds that they themselves braved but one film ago.