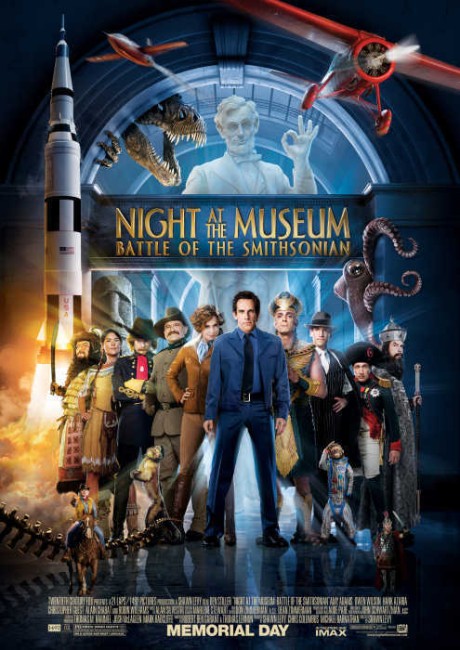 aka Night at the Museum: Battle for the Smithsonian

It is two years since Larry Daley was working as the night guard at New York’s Museum of Natural History. He now runs a successful company where he sells his own inventions via infomercials. He makes a return visit to the museum, only to find that all his friends, the exhibits that come to life by night, have been replaced by virtual exhibitions and are about to be shipped off to The Smithsonian. He bids a sad goodbye. However, after the exhibits are shipped off, Larry receives an emergency call from Jedediah, telling him how Akmenrah’s bad brother Kahmunrah has gone crazy and is trying to obtain the tablet in order to open the gates of the underworld. Larry manages to sneak into The Smithsonian by stealing a guard’s badge. As he and a statue of Amelia Earhart come to life flee through the halls of the museum with the tablet, Akmenrah raises an army of some of the greatest villains in history from among the exhibits to pursue them.

Night at the Museum (2006) was an effort pitched squarely and directly at family audiences. Although it received only middle-of-the-road and mediocre reviews, it was the second highest grossing film of 2006. Viewed, it seemed more a cute concept than a fully fleshed movie where the basic idea of museum exhibits coming to life by night had merely been draped in some certainly excellent special effects and not-terribly-funny comedy routines.

Such success inevitably demands a sequel and most of the production personnel have reunited here. Night at the Museum 2 – frequently referred to as Night at the Museum: Battle for the Smithsonian but only the former on the credits – brings back all the familiar actors and characters – Ben Stiller, Ricky Jervais as the pompous museum head, Jake Cherry as Stiller’s son, the miniaturised duo of Owen Wilson and Steve Coogan, the dinosaur skeleton, Sacajawea, the Easter Island moai that makes goo-goo noises, Attila the Hun, the cavemen and the scene-stealing monkey. Surprisingly absent for most of the film is Robin Williams who turns up at the start and finish (and briefly in the middle as a digitally rendered bronze bust).

Night at the Museum 2 does essentially what a sequel is meant to do – it brings back the familiar characters and it expands the scale of the first effort. Especially the latter – in fact, the entirely film has been premised around doing precisely that. Thus the locale is transferred to The Smithsonian, which we are told is the largest museum in the world, providing a host of new exhibits to come to life – Amelia Earhart, Napoleon, a black-and-white Al Capone, a comically incompetent General Custer, flying and singing cherubim statues, a giant octopus, Rodin’s The Thinker, Albert Einstein bobblehead dolls, the giant-sized marble Abraham Lincoln from the Lincoln Memorial, even cameos from Darth Vader and Oscar the Grouch, and a venture into the Air and Space museum with appearances from the Wright Brothers, the Tuskegee Airmen, Apollo Mission Control and a sequence premised around Ben Stiller and Amy Adams taking flight in the Wright Brothers plane.

One of the cutest additions is having various artworks also coming to life, including familiar works from Jackson Pollock, Andy Warhol, Edgar Degas and Jeff Koons, while the pitchfork from Grant Wood’s American Gothic (1930) proves a handy weapon to defend against the Egyptian hordes before Ben Stiller and Amy Adams make an escape into the black-and-white world of Alfred Eisenstaedt’s classic photograph VJ Day in Times Square (1945).

Exactly like the first film, Night of the Museum 2 is a series of effects scenes and comedy routines and not a lot more – even Ben Stiller seems buried by the show going on around him and rises to the fore surprisingly little of the time. The film zips along in a mindless, brain-unengaged way but rarely involves one on any level beyond the equivalent of watching children’s television.

There seems even less of a plot driving it this time – and one that is dependent on a number of improbabilities (there do not appear to be any security guards or cameras in much of The Smithsonian, the tablet is able to animate statues far from its influence, or even the question of whether it is possible to ‘kill’ a wax/plastic figure as Owen Wilson’s Jedediah is in apparent imminent danger of being throughout most of the film or how Ben Stiller went from a lifelong loser in the last film to highly successful businessman here).

There is a cute seemingly improvised confrontation between Ben Stiller and an uncredited Jonah Hill. Other than the addition of Amy Adams, who makes a perkily sexy Amelia Earhart, and some of the scenes with Hank Azaria, surprisingly little of Night of the Museum 2 adds to anything more than the cinematic equivalent of a junk food snack.

Most present reunited for a further sequel Night at the Museum: Secret of the Tomb (2014).