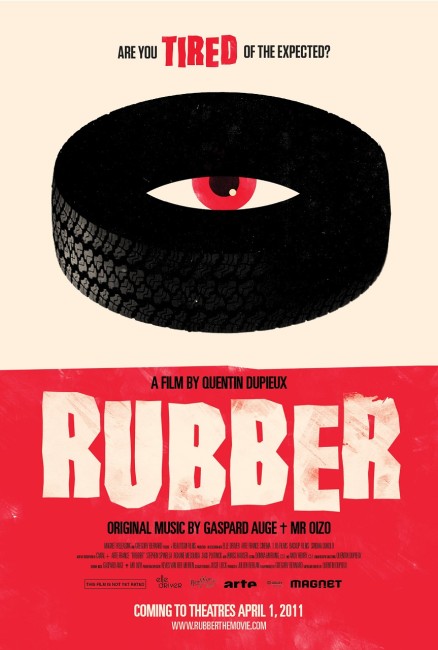 A group of people are assembled in the desert by an accountant where they are given binoculars in order to watch a movie as it unfolds before them. As they watch, an abandoned car tire suddenly comes to life and begins to roll through the sand. It starts to enjoy crushing things and then discovers that it has psychic powers and the ability to cause living things to explode. The tire follows a girl to a nearby motel, leaving a string of bodies along the way. Meanwhile, the accountant feeds the observers poisoned turkey, killing all of them. With everybody dead, the sheriff prepares to give up on the investigation and tells the deputies to go home because everything has been faked for the movie. However, one man in a wheelchair has not eaten anything and survives, wanting to find out what happens. They are forced to play out the rest of the film and tackle the tire as it goes on a killing spree through the town.

There have been monster movie parodies before, usually ones that deal with ridiculous everyday objects on the rampage – see the likes of Attack of the Killer Tomatoes (1978), Blades (1989) about a killer lawnmower, The Killer Condom (1996) and Killer Tongue (1996) to name but a handful. With its capsule description of a killer car tire, Rubber seems to be heading into the same vein – you sit back anticipating either an enjoyable romp through the cliches or else a gonzo deadpan film in the vein of something like Top of the Food Chain (1999) or Trail of the Screaming Forehead (2007).

Nothing however fully prepares you for the ingenuity that Quentin Dupieux does in constantly winding the film around multiple layers of itself until your sides are splitting in delight. If anything, the nearest you could liken Rubber to might be Wes Craven’s Scream (1996) with its characters who sat inside a perfect awareness of the cliches of the very slasher film that was taking place around them.

As much as it is a monster movie parody, Rubber is also a meta-fiction. The film comes with an hilarious frame where all the events that take place are being watched by an audience. This pushes Rubber into the same territory as works like The Singing Detective (1986), Stranger Than Fiction (2006), Written By (2009), Camera Shy (2012), Snowflake (2017), Charlie Kaufman scripts such as Adaptation. (2002) and Synecdoche, New York (2008), and especially Peter Greenaway’s The Baby of Mâcon (1993), which similarly had the drama taking place being watched by an audience as a stageplay. These are all works that at the same time as they show a story ostensibly taking place enwrap it in another whole level about the creative process and/or the knowledge that what is being seen is a fictional work that then comes to influence the other text in unusual ways. (For more detail see Meta-Fiction Films).

Rubber has the funniest opening monologue in any film that one has seen in recent history. The camera opens on a stretch of desert road along which chairs have been randomly placed. A police car then appears and weaves an obstacle course designed to crush every chair before it pulls up and Stephen Spinella’s sheriff gets out of the trunk and turns to address the camera, all the while holding a glass of water in one hand as he delivers a side-splittingly deadpan monologue about things that happen for no reason in films, using everything from Love Story (1970) and The Texas Chain Saw Massacre (1974) to E.T. – The Extra-Terrestrial (1982), JFK (1991) and The Pianist (2002) as examples, before announcing that the film you are about to see is “a homage to the ‘no reason’.” The accountant (Jack Plotnick) then hands out binoculars to the gathered crowd and they are directed to watch the film as it happens before them.

The standard-seeming monster movie is played charmingly tongue-in-cheek. Some of the funniest scenes in the film are the nonchalant images of the tire sitting in a motel room bed watching television, having a shower or it in a chair amidst a house of slaughtered bodies watching Nascar races. The scenes of the tire’s discovery of itself – learning to stand upright and tentatively roll across the desert, it ever so cautiously crushing things it comes across such as a plastic water bottle, a scorpion, a beer bottle and then discovering its psychic powers and splattering a rabbit, before we then see it wheeling and bouncing along as a pop song plays on the soundtrack – are played with perfectly droll wit.

These images are also side-splittingly wound in with those from the watching crowd. The scenes with the tire peeping in on Roxane Mesquida showering are interwoven with commentary from the sidelines about whether or not she has a good ass, while the father snatches the binoculars away from the watching son and the two girls in the crowd stalk off offended. We even get a scene where the others give the man with the camcorder a warning that what he is doing amounts to copyright piracy.

The funniest scenes are those where Stephen Spinella assumes that everybody is dead and starts trying to explain to his deputies that they are in a work of fiction by getting them to demonstrate that their guns are not loaded with bullets, before it is discovered that there is one survivor and they are forced to continue the investigation. It gets even funnier when it comes to the climactic scenes where they are trying to trap the tire using a dummy loaded with explosives and the plan is complicated by Roxane Mesquida protesting about the lame dialogue she is forced to say and Wings Hauser’s wheelchair-ridden old timer come to complain about the improbability of the set-up and ask them to hurry things up. The result makes for one of the smartest and most unexpectedly original monster movie parodies conducted in some time.

Quentin Dupieux was previously known in France as the electronic musician Mr Oizo and had produced several albums. He began directing with music videos and then made the feature films Nonfilm (2002) and Steak (2007), neither of which seem to be widely seen outside France. With the success of Rubber, Dupieux subsequently went onto make Wrong (2012), Wrong Cops (2013), Reality (2014), Keep an Eye Out (2018), Deerskin (2019) and Mandibles (2020) in the same gonzo surreal style.

(Winner in this site’s Top 10 Films of 2010 list. Nominee for Best Original Screenplay and Best Actor (Stephen Spinella) at this site’s Best of 2010 Awards).