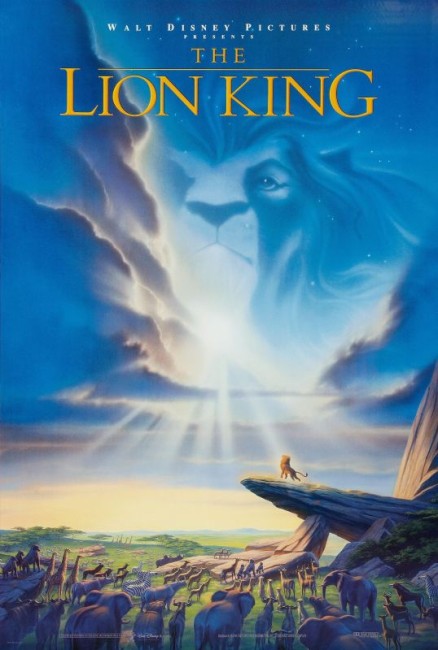 In the veldt kingdom of Pride Rock, the scheming Scar plans to become the lion king. He convinces young Simba, the heir to the throne, to wander off into the elephant graveyard. When Simba is threatened by a horde of stampeding wildebeest, his father King Mufasa comes to his rescue but Scar causes him to fall and be trampled. Scar then turns on Simba, telling him that this was his fault and convincing him the only rightful thing to do is leave the kingdom and never return. Simba wanders out into the desert. There he meets his childhood betrothed Nala who convinces him to find his own strength and return to confront Scar.

By the time of The Lion King, the modern Disney animation renaissance was at its creative and commercial peak. The Lion King came out with a Jurassic Park (1993)-size marketing blitz that ended up making it the No. 1 box-office hit of the year and the most successful Disney animated film ever.

Around the same time, Disney films were being scrutinised in minute degrees by the PC brigade – the Arabic community complainted that Aladdin (1992) was racist and certainly the historical liberties taken in Pocahontas (1995) were justified. When it came to The Lion King, the theme of a young heir finding his rightful throne was not the most popular considering the problems the last bastion of English monarchy was having at the time but is surely no reason for complaint. The most controversial aspect of The Lion King were the hyenas, who spout hip ghetto street talk and when they take over the lion kingdom, gives unmistakable overtones of a white neighbourhood having been turned into a ghetto. Many jumped on this seeming racial characterisation but when it came down to it, it is only one of the three hyenas – the one that has the unmistakable laidback sass of Whoopi Goldberg – that speaks with a ghetto accent.

All this unnecessary nitpicking tended to eclipse the fact that The Lion King was easily one of the best films to come out of the 1990s Disney renaissance. It stirs the Disney formula well – the comic relief elements seem more likable than usual and the songs never get in the way. Perhaps the main story, which is sort of borrowed from William Shakespeare’s Hamlet (1602), and the hero’s quest never hit the great emotional heights that classic Disney films reach, nevertheless The Lion King warms the heart in all the requisite places.

Where The Lion King stuns is when it comes to the animation. The opening birth of Simba – which the studio released as an advance trailer to theatres – is absolutely stunning. As the sun rises animals cross the veldt towards Pride Rock, all come to witness the confirmation of the baby Simba. This takes place in tones of religious awe with the clouds parting and a beam of sunlight coming down to touch the baby Simba. The true beauty in the scene comes in the changing of scales between epic size and tender anthropomorphic softness – cuts between the vast epic landscape and incredibly detailed and lifelike assemblage of the animals to soft images like the baby sneezing as the clay it is daubed with tickles its nose.

Disney also employ the full three-dimensional computer animation techniques they pioneered with Beauty and the Beast (1991) – there is a fabulous shot panning around Mufasa and the young Simba proudly standing atop a rock. The landscapes in the film are colossal – veldts, lush forest lands, desert, canyons and the like – and have such detail that they give the appearance of having been painted as 30 foot+ canvases.