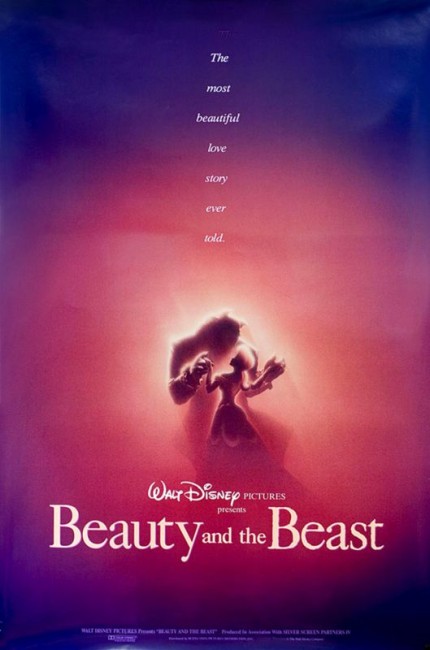 The eccentric inventor Maurice becomes lost in the woods and ends up at a castle. A fearsome Beast then appears and throws him in the dungeons. Maurice’s daughter Belle comes searching for him and agrees to stay with the Beast in return for her father’s freedom. There she gradually she comes to develop feelings for the Beast. The Beast is under an enchantment and must find love before the magical rose that has transformed him fades whereupon he will die. Meanwhile, Belle’s would-be paramour, the huntsman Gaston, has raised an angry mob to kill the Beast.

Beauty and the Beast was Disney’s thirtieth animated film. It was highly acclaimed on its release. It represented a concerted effort by the studio to return to the grand style of animation that they made their name with during the 1940s with the likes of Snow White and the Seven Dwarfs (1937), Fantasia (1940), Pinocchio (1940), Dumbo (1941) and Bambi (1942). This animation tradition had fallen into considerable neglect throughout the 1970s and 80s following the death of Walt Disney in 1966, with the studio sporadically producing bland efforts like Robin Hood (1973), The Rescuers (1977), The Fox and the Hound (1981), The Black Cauldron (1985) and Oliver and Company (1988). During this period the studio was only putting out one animated film every 3-4 years and mostly recycling and re-releasing their classics.

Beauty and the Beast was so well received that the film became the first (and still only) animated feature to be nominated for an Academy Award Best Picture. The success of this in return convinced Disney there was a market for high-quality animated features and brought about their return to the classical form with the likes of The Lion King (1994), Pocahontas (1995), Mulan (1998), Tarzan (1999) and others.

Beauty and the Beast manages to haul in all the elements and the indulgences of classic Disney – the buffoonish supporting characters, the sweep and spectacle of the animation, the innocence and romance, even the scary scenes – and gives them a bright and shining new working over. It is also a modern film too. Unlike classic Disney heroines of the past, Beauty is a New Woman, while the Beast becomes the dream Sensitive New Age Guy – she determinedly makes her own choices and eventually, inevitably, finds the soul inside the beast. The theme of the Beast’s redemption through love still makes for good mileage despite its familiarity and the film conducts it with some impressively adult emotions, even if their eventual falling into one another’s arms comes rather quickly. The definitive version of the legend still remains Jean Cocteau’s extraordinarily beautiful Beauty and the Beast (1946) but this is a worthy version too.

It is all beautifully animated – every background could almost be hung on one’s wall. One sequence where Belle and the Beast dance through the ballroom is absolutely stunning. It is a triumph of computer animation where the computer allows the camera to sweep around the dancing couple and pan up into the grand ceiling and circle the chandelier as though the animation camera were an ordinary three-dimensional tracking dolly or crane shot, something that had been technically impossible prior to Beauty and the Beast. Of course, this became the basis of the modern CGI animated film where such moves have become commonplace.

In the 1990s, Disney has spun off direct-to-video sequels from most of their theatrical animated films. Beauty and the Beast: The Enchanted Christmas (1997) was one such sequel reuniting all the characters from here. The film was also adapted into a popular Broadway musical in 1994. In 2001, to celebrate the film’s tenth anniversary, Beauty and the Beast was re-released in a new version remastered for the IMAX high-definition giant screen process and with an entire new animated song sequence Human Again that was originally written for the Broadway version, being added for the occasion. In 2012, Beauty and the Beast was re-released in 3D. Beauty and the Beast (2017) was a live-action remake from Bill Condon featuring Emma Watson as Belle and Dan Stevens as the Beast. Belle also makes a cameo appearance as one of the Disney princesses in Ralph Breaks the Internet (2018).

Directors Gary Trousdale and Kirk Wise went onto become one of the top directing teams of the new Disney renaissance. They subsequently went onto make The Hunchback of Notre Dame (1996) and Atlantis: The Lost Empire (2001).