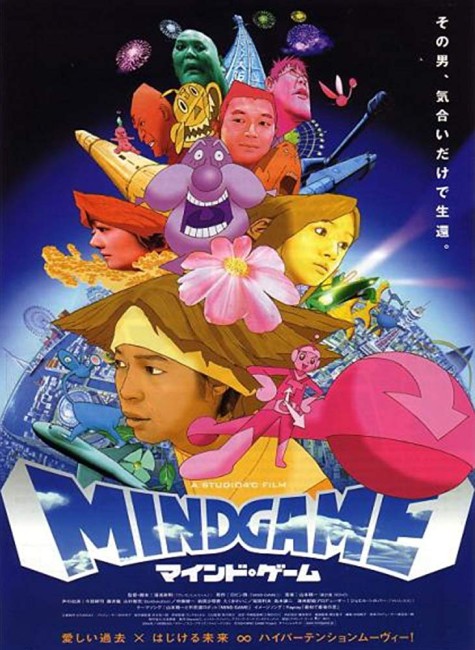 Nerdish 20-year-old Nishi aspires to be a manga artist. He has loved Myon since they were in school together but is heartbroken when she tells him that she loves someone else. Myon takes Nishi to the cafe that she and her sister Yang run, only to have two Yakuza hoods burst in. One of the hoods goes crazy and attempts to rape Myon but Nishi is too cowardly to stand up. The hood plants the gun against Nishi’s anus and shoots. Nishi’s spirit goes up to Heaven where he meets God who berates him for being a loser. Instead of going on into the afterlife, Nishi turns and runs back into his own body and emerges just before he was shot where he is able to successfully turn the tables and shoot his killer. Deciding he doesn’t care about anything, Nishi takes the Yakuza’s car and drives away madly with Myon and Yang in the backseat. In a high-speed car chase, he crashes off the side of a bridge where the three of them are all then swallowed up by a whale. Inside the whale’s belly, they find themselves trapped in the company of an old man who has made his home there.

Mindgame was an anime that was greeted with some of the most ecstatic rave reviews of any film to emerge from Japan in recent years. Some reviewers went so far as to compare it to cult surrealist classics like El Topo (1970) and Eraserhead (1977). Mindgame comes out of Studio 4oC, the production company formed by Koji Morimoto, Eiko Tanaka and Yoshiharu Sato. Studio 4oC has so far been responsible for collaborative work on films like Memories (1995), Spriggan (1998) and Metropolis (2001) and came to fame especially with various episodes of Western-backed anthologies like The Animatrix (2003), Batman: Gotham Knight (2008), Halo Legends (2010) and Green Lantern: Emerald Knights (2011). They subsequently went onto make Tekkonkinkreet (2006) and the anthology Genius Party Beyond (2008). Mindgame is the directorial debut of Masaki Yuasa who had previously worked as an animator in various capacities on several anime films.

Mindgame – usually called Mind Game by reviewers but just the one word on the credits – is based on the manga by Robin Nishi that he began publishing in 1995. The manga would appear to be an autobiographical comic-book in the vein of artists like Harvey Pekar, Art Speigelman and Robert Crumb. Not having seen the original manga, which does not appear to have been published in English, I am not in a position to compare. The film version at least would seem to be a surreally fantasticised autobiography of the author – the lead character is also named Robin Nishi, for instance.

Much of what plot there is centres around Nishi’s love of his big-breasted childhood friend Myon, her career as a swimmer, her sister Yang who would seem to be an avant-garde artist and much self-loathing on Nishi’s part over his being too cowardly, unassertive and obsessed with porn. Of course, the film’s tells all of this in a decidedly eccentric way – such as having the characters engaged in exploits with Yakuza thugs, going down into a Utopian mini-society in the belly of a whale, even telling several alternate versions of the characters histories, including Myon at one point seeming to be competing in an intergalactic swimming event that is held in anti-gravity.

What perhaps is even more eccentric about Mindgame is the panoply of animated visual styles that Masaki Yuasa adopts throughout. These range all the way from a spidery line-drawn style similar to Peter Chung’s Aeon Flux (1991-2, 1995) to pastiches of Astro Boy (1963-6) to a grungy low-tech rotoscoping technique that uses the actual voice-actors’ faces pasted over the animated characters, stylised lovemaking sequences in impressionistic paint animation and more standard forms of anime.

I must confess I found it difficult to follow what Mindgame was doing or frequently even about. The plot rambles off onto all manner of tangents. In particular, the middle section with the characters trapped in the belly of the whale slows down in a big way and hops off into bizarre vignettes with the characters dancing and doing swimming formations with a marine creature; Yang prancing around in a catsuit with a gigantic plastic inflatable strap-on penis that is filled with fish; or else hurling herself at a paper wheel while covered in different coloured paints.

The climactic escape from the whale contains a madcap sequence with the characters running at frenetic speed toward the whale’s mouth and then for some reason leaping out and taking gigantic bounds across ships, jet airplanes and skyscrapers that keep falling in their path. It frequently feels like a film where Masaki Yuasa has thrown in every random thought in his head.

You might compare Mindgame to Richard Linklater’s similar Waking Life (2001), which was a similarly surreal and plotless animated film. Where Waking Life drifted through a series of vignettes that offered penetrating philosophical insights, Mindgame has a randomness to it – it seems busy and weird but at the end of it you scratch your head and wonder what it was actually about. If anything Mindgame resembles more some of the incomprehensibly surreal films of the French New Wave in the 1960s that seemed to throw in everything including the kitchen sink without rhyme or reason and calling it art.